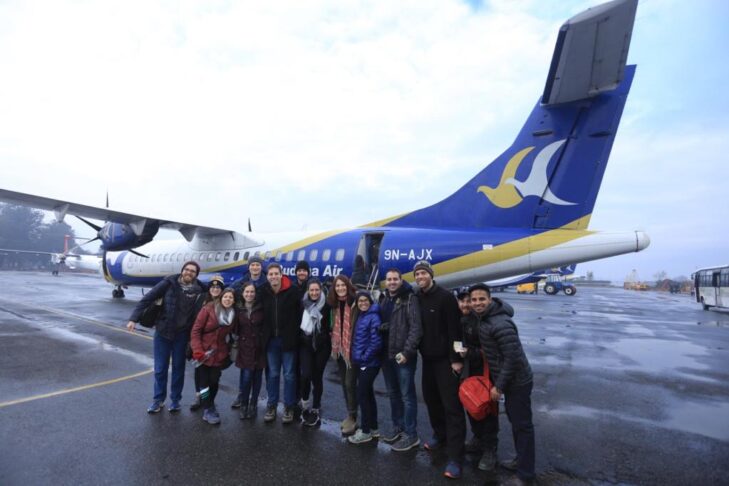 Ayelet: Arriving at the Kathmandu Chabad House for Shabbat dinner, the Project Inspire team was warmly greeted by Tami, the wife of Rabbi Mendi, who oversees the Chabad House in Pokhara, a town that is about a seven-hour drive from Kathmandu. To the left of the Chabad House door, painted in big, colorful letters and images, is the saying “Kan Habayit, Kan HaLev” (Hebrew for “Home is here, heart is here”). Tami led us to the dining room, where soon after Rabbi Mendi, who was graciously covering for the Chabad co-director, and Rabbi Chezky Lifshitz, led us in traditional song and prayer that was followed by a scrumptious Shabbat feast.

Through a lively conversation with Tami and Mendi, we quickly learned that Rabbi Lifshitz and his wife, Chani, were involved in far more than providing a weekly meal for Jewish travelers in the region. During the earthquake in 2015, Chezky and Chani were heavily involved in rescue and relief efforts for locals and Jewish travelers alike, collaborating with the Israeli embassy in supplying thousands of Nepali people with tents, blankets, medication, food and water. The peak travel season in Nepal (from September to November and March to May) brings many backpackers; Rabbi Chezky can sometimes be called twice a day to meet unfortunate travelers who must be rescued and brought to the hospital during their hike.

Our meal ended with Chani retelling us the parasha (Hebrew for a passage in Jewish scripture dealing with a specific topic) for this week, which was a story about forgiveness. In fact, Joseph’s forgiving of his brothers for selling him at the age of 13 was the first recorded in history, and Chani reminded us that, like Joseph, we should consider that it is not up to us to judge; it is up to us to show compassion to all people.

Overall, it was a lovely evening and first Shabbat of the century. David will tell you more about the next day’s festivities.

4:45 a.m.: Wake up for flight around the Himalayan mountains. It’s early. Is this going to be worth it?
5:39 a.m.: Airport arrival: Very overcast, thus tempered excitement. Will we get wheels in the air?
6:37 a.m.: “Kathmandu Airport Closed” seen on screens and non-existent visibility leads to supposed airport closure.
6:42 a.m.: Playing heads-up with our fearless zoology-degree-holding-leader Aviva. How do you not get “barracuda” from four people yell-singing the first verse of the song “Barracuda”?
6:52 a.m.: Elation! Airport screens show delays instead of cancellations. Never has a flight delay been meet with such joy.
7:19 a.m.: Waiting for mountain weather report on screens. Aviva buys faux wooden fuchsia-framed sunglasses to pass time. What is she trying to hide?
7:41 a.m.: Boarding! Himalayas, here we come! Let’s go see some mountains!
7:57-9:07 a.m.: Breathtaking. In the afternoon, we met with Mr. Krishna Bhakta Pokharel, chairman of the law, justice and humanitarian parliamentary committee. We discussed the transition from Nepal’s monarchy to a constitutional democracy. Mr. Pokharel was instrumental in the process of drafting the constitution for the fledgling democracy. The new constitution promises the basic rights of food, health, education and basic employment to all Nepalis. And, interestingly, written directly into the new constitution is a provision requiring 33% women’s participation rate in government. As it happens, the current parliament is 34% female. Overall, it was a very interesting discussion. Perhaps the most apt quote of the trip thus far was overheard from our local guide, Sanjeep Pandui, who said, “Nepal is the land of uncertainty and mystery.”

Ayelet Katzelnik is in her final year of a clinical psychology graduate program. She previously worked for several nonprofits and traveled the world prior to finding her passion in facilitating the process of exploration for people of all backgrounds. Her hobbies include yoga, living mindfully and spending time in the outdoors. 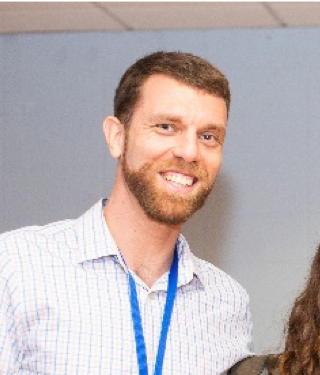 David Lantsman works as a research manager at IDC and has an MBA from Brandeis University. In his free time, he enjoys volunteering with JCRC’s ReachOut! program, where he works with middle-schoolers helping with homework or a rousing game of Boggle or Uno. His favorite food group is nuts.