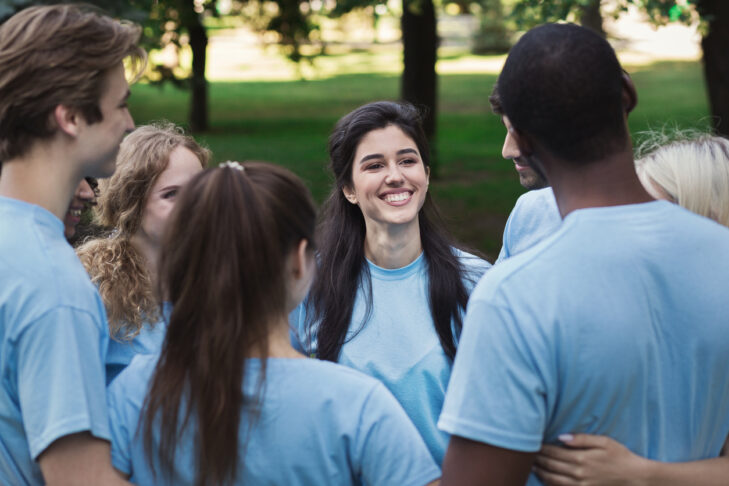 It might only be December, but it’s not too early to begin contemplating summer opportunities. Here’s a unique one: Teen JUST-US Boston is a new six-week, immersive social justice internship program for rising high school juniors and seniors. Teenagers participate in internships at organizations such as Bikes Not Bombs and the Greater Somerville Homeless Coalition, plus Jewish leadership development workshops. All internships are MBTA accessible, and teens are expected to commute via public transportation, fostering independence.

What’s the mission of Teen JUST-US?

Look at the Parkland teens. Look at Greta Thunberg. Teens can make an extraordinary difference. And, from a Jewish perspective, we know that tikkun olam really matters, and I want to give an opportunity to teens at this point in their lives to see that they can make a difference.

I would also say that in general, there’s a lot of stress in the world today with teens and with adults. People look at the myriad problems we have, and they say, “It’s overwhelming; what can I do?” And the answer is, you can do a lot. The idea is to have a structured experience for teens where they can not only make a difference in the summer, but where they’re imbued with the values of giving back. It’s my hope that the “giving back” message resonates, and that throughout their lives in one way or another, this will be a part of what they do. At the teen years, it’s pretty pivotal.

In the Jewish summer experience world, there are extraordinary programs, but they have two things in common. One, they’re generally away. And two, they are expensive. There are camp scholarships and other ways to defray the cost, but if you come from a family of modest means, they’re out of the running for you.

Who do you hope will apply?

I envision it as a wide-open opportunity. I’m interested in young people who are Jewish but unaffiliated, or Jewish and affiliated. They could be Reform, Conservative, Orthodox, Reconstructionist, all comers. I think there’s also some wonderful benefit from what I hope will be a diverse group of young people; I’m interested in anyone from any sort of level of experience with Judaism.

Was there an “aha!” moment when you decided to launch?

I watched as high school students I knew had terrible internships. Besides expensive summer options, you could volunteer or have an internship, but it depends upon finding it, and the quality of those can vary tremendously. This is a lot more structured; it’s a lot more thought out.

What will interns do all day?

We actually have an internship agreement with each organization. There can be up to 15% administrative work; it’s not interesting for a teen to sit at a copier eight hours a day. But administrative work comes with the territory. Everyone does it in every job, so it’s fine to have it be a component.

The second component is a project around social justice, which has to be doable by a team in a six-week window, three days a week. The idea was that we wanted them to have thought it through so that when an intern arrives, there’s a specific project with a supervisor and a mentor.

The third thing is they can do direct service, in some cases. For example, at the Kennedy Institute, they’re excited about training tour guides. At another organization, there’s a project where an intern might interview folks who have worked with the organization to create a narrative for a story that’s going on their website. Another might do research on literacy performance in Boston schools.

What do students work on when they’re not interning on-site?

Three days a week, they’re at their internship. Two days a week, they’re together as a cohort. They’ll have a chance to come together and talk about how their internships are going, what’s happening, all of those good things. In the afternoon on Wednesdays, they go out into the field and have an experience. When discussing climate change, we’re going to go to the Mystic River watershed. We’re going to get in kayaks and pull invasive weeds. We are going to take them to a place where they can assemble and paint a bed for a child who’s never had one. I would venture to say the odds are pretty high that most kids in my program always had a bed.

The idea is that there will be an afternoon trip every Wednesday where they will get to do hands-on learning and experience about the topic of that week. On Fridays, we’ll do workshops on everything from writing a resume and a cover letter to conflict in the workplace, and leadership development skills and advocacy. It closes with a Kabbalat Shabbat service.

Why should teens—and their parents—get excited about applying?

I think it’s also an extraordinary opportunity to learn. I think social justice is incredibly important. When I think about why you might want to do this, imagine that you get to have an amazing summer job and you get to learn about a host of social justice issues.

From a parent’s perspective, we hope that teens will strengthen Jewish identity and develop leadership skills. I would argue that this fosters independence and confidence: the students are going to get themselves to work. It’s amazing to me sometimes when I talk to 16-year-olds who have never been alone on the MBTA. You’ll make friends with very cool kids. It’s powerful. You’ll get to learn: How can I be a leader; how can I advocate? So, to me, there isn’t one reason. There are lots of reasons.