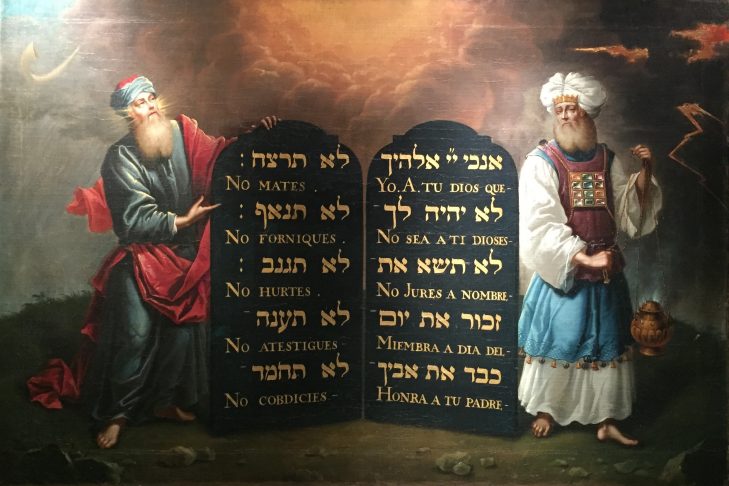 “Moses and Aaron with the 10 Commandments” by Aron de Chaves

This week we read about the central event in the collective consciousness of the Jewish people: the revelation at Sinai. Parashat Yitro (the Torah portion of Jethro) vividly describes the activities and prohibitions that were to prepare the Israelites for the coming experience. Fire and smoke, blasting horns and quaking mountains lead to this seminal event in the memory of Am Yisrael  (the Jewish people). And yet, if this great revelatory event was transcendent and other-worldly, it is immediately preceded and followed by texts that seem far more ordinary. In chapter 18 of Exodus we read what we might today call the community’s organizational system, and in the latter part of chapter 20 a set of rules about idolatry that continues into the next portion.

As a child, I learned a powerful insight from the great medieval commentator Rashi that has stuck with me over the years. In fine rabbinic fashion, he posed his insight in the form of a rhetorical question: “Mah inyan Shmitah etzel Har Sinai?” Why is the matter of the Sabbatical Year [and the Jubilee] placed next to [a reference to] Mount Sinai?” What an inviting way to inquire about the relationship among adjacent, and seemingly unrelated, statements! The question can be used more broadly to consider the relationship between any two proximate items that appear at first glance to be disconnected.

There are many possible responses to Rashi’s question, of course. He argues (based on an earlier rabbinic teaching) that this juxtaposition teaches us that both the “general rules and minute details” of the Sabbatical Year were ordained on Mount Sinai! “So, too, were all commandments [in the Torah] with their general rules and minute details” revealed during this monumental event, even those that did not appear in the Ten Commandments.

Since Hebrew College educates leaders for the Jewish community and broader world, I offer my own commentary that relates to leaders and community organizations, drawing on Rashi and a pair of modern scholars. Lee Bolman and Terry Deal argue that all organizations can be looked at from four different inter-related perspectives: (1) symbolic, (2) structural, (3) human resources and (4) political. Our text embodies the first two perspectives, and hints here at the third (that is elaborated in many other Torah texts). We will leave the fourth for a future portion.

Let’s start with the central event: the revelation at Sinai. This encounter expressed foundational values and beliefs around which the Israelites could coalesce and what they express is at the heart of Judaism. While of course not analogous to the awesome events at Sinai, contemporary Jewish community organizations likewise need to identify and proclaim their animating values and beliefs as well as nurture visionary leaders who know in their kishkes (guts) the power of symbolic expression. Stories that link the present with both the past and future, rituals that exemplify the values, ceremonies that involve their affirmation and other rousing expressions of a group’s values and beliefs invite people’s enduring commitment and provide meaning to their lives.

There are two different ways that we see evidence of the structural frame: by creating systems and specifying expectations, procedures and laws.

It is not unusual for groups that form around novel insights, important purposes and dedicated individuals to be hampered by forces that members don’t seem to notice or deal with. Perhaps, like Moses, they work heroically just to keep things going. Or perhaps they don’t care much about practical details.

At the opening of the parashah, Moses’s father-in-law, the Midianite priest Yitro, offers us a powerful lesson. While at the Israelite encampment with his daughter and grandsons, Moses describes the exodus from Egypt. Yitro is so impressed by what God did for the Israelites that he spontaneously proclaims the supremacy of the Israelite deity and offers a sacrifice to God (Exodus 18:11). But the next day he encounters a grimmer reality: Day and night, Moses is the only person dealing with the people’s questions and disputes. Imagine his to-do list and the frustrations of the people who wait for his attention!

After first asking Moses why he acts like this, Yitro wisely confronts Moses: Doing this “is not right. You will surely wear yourself out for the task is too heavy for you. You cannot do it on your own.” Yitro then designs a well-differentiated judiciary and administrative system and even instructs Moses on the kind of people who should fill the roles (Exodus 18:13-23). Yitro’s challenge is as timely today as ever: Systems that support an inspiring enterprise are essential. And if people who structure them are, like Yitro, clear, forthright and eager to empower others, they make it more likely that the endeavor will endure. At the same time, the criteria Yitro suggests for people to fulfill the new roles also show concern for the human aspects of organizational life.

The laws that follow the giving of the Ten Commandments at the end of parashat Yitro and in the following portion also express the values and beliefs that are at the heart of God’s expectations for the Jewish people. They, for example, are to remember that they were once slaves because it leads to treating others compassionately, as God did with the Israelites. Like the effort to develop systems, the need to specify expectations, procedures and laws can be taken for granted. But without attention they can develop haphazardly as people respond to whatever problems emerge. Alternatively, they might develop with minimal reference to the values and beliefs that are intended to be at the heart of the endeavor, so that a gap between what is said and what is done grows and the core values and beliefs erode. Principles and actions need to align. Leaders who are prepared to translate a group’s ideals, values and aspirations into expectations, procedures and laws are also essential.

Structures Aligned to the Grand Vision

God’s giving the Torah to the Jewish people at Sinai is the focus of Parashat Yitro and central to Jewish life throughout the ages. Jews will always be grappling with what this means and how to actualize God’s vision in the here and now. But in honor of its namesake, our text also reminds us that grand vision is not enough. We will always need bold visionaries to inspire and orient us. Organizations, whether large or small, also need leaders who design and implement what we might call the “delivery systems” of structures and rules. “The Word” is essential, but to make a difference in our lives, we must also consider how to turn words into actions and aspirations into reality.

Susan Shevitz is associate professor emerita at Brandeis University, where she taught in and then directed the Hornstein Program in Jewish Communal Service (now Jewish Professional Leadership). She has also taught a course on leading as clergy to each cohort of the Rabbinical School of Hebrew College as an adjunct faculty member, and currently serves as a member of the Hebrew College Board of Trustees.