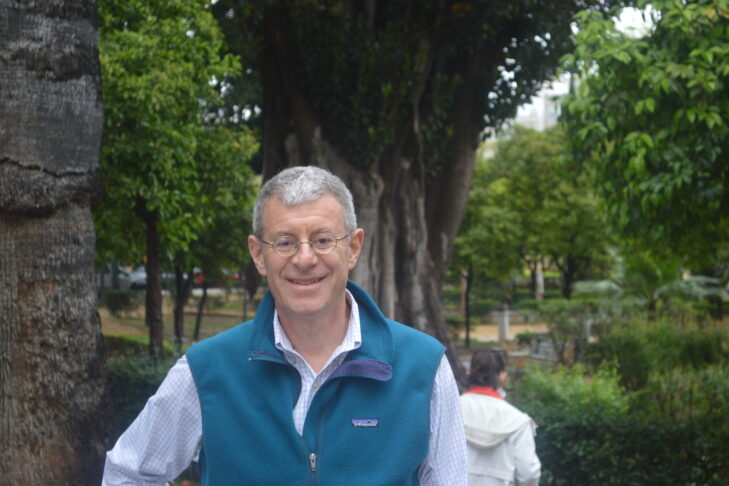 More than a hundred years ago, the Anti-Defamation League established a uniquely dual mission: “To stop the defamation of the Jewish people, and secure justice and fair treatment to all.” Attorney Joseph S. Berman, who was elected board chair of ADL New England last month, told JewishBoston that the ADL’s iconic motto has remained the same for its 107-year history. “We care first and foremost about fighting antisemitism, including fighting extremism and fighting hate, whether it’s from the left or right,” he said. “That’s our North Star. To secure just and fair treatment to all also serves as another North Star. That’s why we stand up for the LGBTQ+ community, the African American community and the immigrant community.”

Berman became involved with the ADL in the early 1990s as a young lawyer clerking for a federal judge and then practicing law in Denver. A career move into corporate law and litigation brought him to Boston in 1993. While maintaining a distinguished law career, Berman also garnered accolades from the ADL. He was the recipient of the ADL’s Krupp Young Leadership Award in 2001 and the David A. Rose Civil Rights Award in 2008.

The ADL’s civil rights cases are important to Berman. He noted that much of his involvement with the ADL has been spent working on immigration-related issues. “As Jews, we were all immigrants to this country, and through the ADL I have been involved in some very important immigration fights in the last four years,” he said. “Whether it’s opposing the Muslim travel ban or working to unite parents with their children on the southern border, those issues have been very significant to me.”

However, in 2013, Berman found himself entangled in a controversy with Watertown’s Armenian community. That year, Gov. Deval Patrick nominated Berman to be an associate justice on the Massachusetts Superior Court. Four people on the Governor’s Council objected to his candidacy on the grounds of his volunteer work with the ADL. In 2007, the ADL had alienated the Armenian community because the civil rights organization failed to characterize the Armenian genocide as an actual genocide.

Berman was part of a lay-led team that brought their concerns to Abraham Foxman, then the ADL’s national director. “I think we were mostly successful in having Foxman come to recognize the Armenian genocide as, in fact, a genocide, even though the term wasn’t in use in 1917,” he said. “We achieved much of what the Armenian community fervently asked of us.”

Nevertheless, the issue dogged Berman’s judicial nomination and he was not confirmed. “What happened with the nomination was unfortunate,” he noted. “It was obviously very disappointing for me. It was a longtime dream of mine to become a judge. But it also reinvigorated my enthusiasm for the ADL and its work. Some people thought I should have quit the ADL over the Armenian issue. But I had invested so much in the organization, and I care deeply about its important, good work. I wasn’t going to walk away from that.”

Since 2017, Berman has been the general counsel of the Board of Bar Overseers of the Supreme Judicial Court. In his role, Berman enforces the Massachusetts Rules of Professional Conduct. He also writes and speaks often about legal ethics.

In addition to his work on civil rights, Berman has also been working on church-state issues. “[Separation of church-state] has been of critical concern to the ADL and to me,” he said. “It’s important to find the balance between a person or group’s legitimate exercise of their freedom to practice religion versus the rights of others to have their civil rights.” Berman pointed to the case of a baker in Colorado who would not make a wedding cake for a same-sex couple. “Religion is very private, and there should be a separation between one’s religious observance and the public square,” he added. “Keeping religion out of the pubic square as much as possible is especially important to Jews, who are a very small minority in this country.”

Another concerning issue for Berman is the rise of antisemitism on college campuses. He described the situation as a “trouble spot for the Jewish community. We’ve seen the BDS movement take hold on campuses and lead what I would say is overt antisemitism. I’m very concerned about Jewish students and the climate they have to face. I’m worried it’s a climate of ignorance and hatred against the State of Israel and, by extension, hatred against Jews. I’m working with leaders of campuses to make sure that Jews and Jewish students feel safe. I don’t know that they do right now on a lot of campuses.”

Berman is looking forward to continuing to fulfill the ADL’s goals throughout his two-year tenure as New England regional board chair. “It can be tough for us to have a dual mission,” he said. “Sometimes those parts come into conflict with each other and we have to strike a balance. I’ve cared so deeply about our work and the people involved in it. I want to do everything I can to further the ADL’s mission as regional chair.”