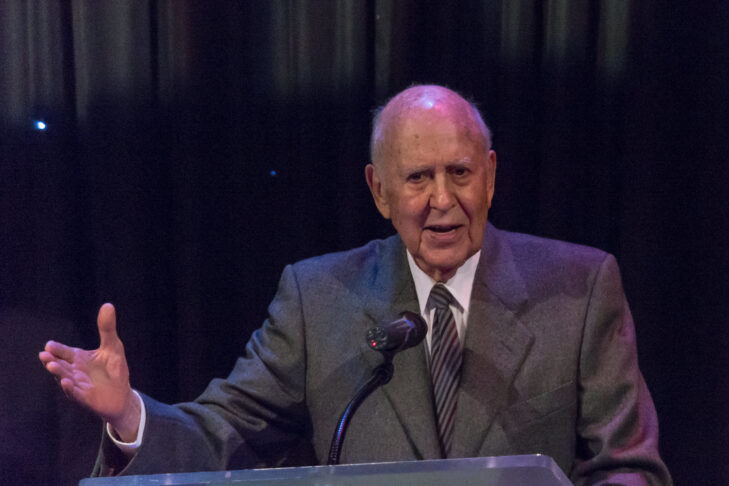 A few hours before Carl Reiner died last week, he tweeted: “Nothing pleases me more than knowing that I have lived the best life possible by having met & marrying the gifted Estelle (Stella) Lebost—who partnered with me in bringing Rob, Annie & Lucas Reiner into this needy & evolving world.”

The tributes began immediately after Reiner’s death. His lifelong friend and comedy partner Mel Brooks issued a statement proclaiming: “Carl was a giant, unmatched in his contributions to entertainment. I loved him. When we were doing ‘The 2000 Year Old Man’ together, there was no better straight man in the world. So whether he wrote or performed or he was just your best friend—nobody could do it better.”

Close friend Alan Alda tweeted: “His talent will live on for a long time, but the loss of his kindness and decency leaves a hole in our hearts. We love you, Carl.” Dick Van Dyke noted: “My idol, Carl Reiner, wrote about the human comedy. He had a deeper understanding of the human condition than I think even he was aware of. Kind, gentle, compassionate, empathetic and wise. His scripts were never just funny, they always had something to say about us.”

I first encountered Carl Reiner’s comedic genius in reruns of “The Dick Van Dyke Show.” I immediately became a pint-sized fan. My favorite movie up to that point was “Mary Poppins,” and I was mesmerized that Bert, the cockney chimney sweep, was now Rob Petrie, a buttoned-down television writer for “The Alan Brady Show.” He had a wife, Laura, as played by Mary Tyler Moore, and a son, Richie, who was about my age. The Petries lived in exotic New Rochelle, New York, to my bland West Hartford, Connecticut, and he had both a hilarious and worrying habit of tripping over furniture.

But it was Alan Brady, the grouchy talk show host with the bald or toupeed head (depending on the scene), often filmed from the back, that mesmerized me. Alan was loud and cantankerous, and to 6-year-old me equally fascinating and terrifying. He scared the life out of Laura, who in one episode inadvertently and publicly exposed that he wore a toupee. Like many things on “The Dick Van Dyke Show,” this comedic construction influenced the next generation of sitcoms. Think about the depiction of George Steinbrenner voiced by Larry David and represented by the back of Lee Bear on “Seinfeld.”

In addition to making memorable cameo appearances, “The Dick Van Dyke Show” belonged to Carl Reiner. He created the series, which ran from 1961-1966, and arguably the first great television sitcom to be about television. It was very meta without being pretentious, providing a snapshot of the legendary writers’ room working for shows with a prima donna host or anchor at the helm. Think “30 Rock” or “The Mary Tyler Moore Show,” an indirect spinoff of “The Dick Van Dyke Show.”

The show was also a great success as a hybrid comedy about a suburban married couple thanks to the great chemistry between Van Dyke and Moore. Reiner once said: “The Van Dyke show is probably the most thrilling of my accomplishments because that was very, very personal. It was about me and my wife, living in New Rochelle and working on the Sid Cesar show.”

Born in the Bronx in 1922, Reiner’s parents were Jewish immigrants. His father, Irving, was a watchmaker; his mother, Bessie, looked after the family. The neighborhood was working class and it was where Reiner mimicked voices and tried out his jokes. He set his sights on going into show business early. After high school, Reiner went to drama school and was a member of a modest theater troupe.

But his big break came in 1950, when he signed on to be Sid Caesar’s sidekick in “Your Show of Shows.” It was on “Your Show of Shows” that Reiner memorably set the pace for sketch comedy on television. He was also a writer for the show, which shaped the fictional Rob Petrie’s experiences. And like the Rob Petrie character, Reiner was a family man. He was married to his beloved wife, Estelle, for 65 years. She died in 2008. They had three children, including the writer, director and actor Rob Reiner.

Over the years, Reiner was honored with many Emmys for his lifelong work in television. In 2000, he received the Kennedy Center’s prestigious Mark Twain Prize for American Humor. During the ceremony’s broadcast, the sound system failed. Not missing a beat, Reiner called down from the balcony, “Does anybody have four AA batteries?” The sound was eventually restored, and like Reiner had done so often in his career, the show proceeded to go off without a hitch.