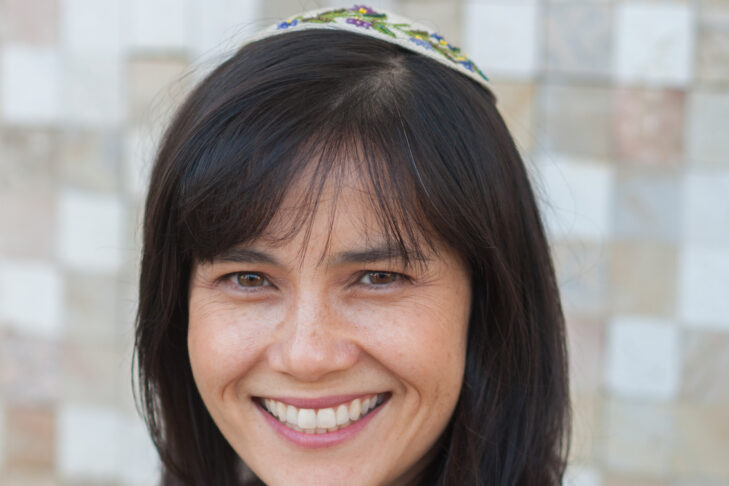 When the Chinese New Year is celebrated this Jan. 25, it will mark one of three annual new year observances in the family of Rabbi Jacqueline Mates-Muchin.

Mates-Muchin is the senior rabbi at Temple Sinai in Oakland, California. She and her family celebrate the Chinese New Year, the Jewish New Year and the secular new year.

She is the first Chinese American rabbi in the U.S. “I’m very proud of it,” she told JewishBoston.com in a phone interview. “I think that I’ve been very fortunate to be a part of two really rich and wonderful traditions. There’s a lot of emphasis on family, thoughtfulness and practicality. A lot of things are really complementary.”

On Mates-Muchin’s mother’s side, she has Cantonese family roots. But, she said, “my grandparents were born in this country, both in California. My Chinese family [has been in the U.S.] for a very long time, well over 100 years. We’re not as connected to China in a lot of ways as to the Chinese American story, the story of Chinese communities in San Francisco and California.” She has not been to China, although some of her siblings have, she said.

Her Chinese American mother and Ashkenazi Jewish father met as students at UC Berkeley. “They were in the same honor society,” Mates-Muchin said. “They just met there.”

As she wrote in an article for ReformJudaism.org in 2018, her childhood was where she learned to celebrate three new year’s, and to bring in Chinese traditions for Jewish lifecycle events, such as lion dancers at the b’nai mitzvahs of herself and her siblings.

Mates-Muchin said her family’s Chinese New Year celebrations growing up were “very much the same” as her current celebrations with her husband, JT, and their four children.

“It’s an opportunity for family to get together,” she said, adding, “Like a lot of holidays, it’s a time for celebration, getting together, some reflection.”

On Saturday, she and JT will give gift envelopes to their children, and the family will enjoy a Chinese vegetarian dish called jai, or Buddha’s Delight. The ingredients include “cellophane noodles, fungi, lotus root and gingko nuts.” The recipe for the holiday is “different from what you might get on any other day,” Mates-Muchin said. “It’s tied in special knots for the new year.”

There are some parallels between the Chinese and Jewish calendars in that each one uses both solar and lunar calculations, Mates-Muchin said, including in counting months and in making sure holidays stay in the calendar cycle.

In a difference from the Jewish calendar, the Chinese calendar gives each year the name of one of 12 specific zodiac animals. This coming new year marks the “Year of the Rat.” Mates-Muchin was born in the Year of the Tiger. “The tiger is a good one,” she quipped. “It’s probably more fortunate than the rat.”

Regardless of the animal assigned to the coming new year, each new year offers a chance for both contemplation and action, which happens each time Mates-Muchin’s family celebrates the start of a new year across traditions.

“What I wrote about in that article [for ReformJudaism.org] was that we have three opportunities to start the new year over again,” she said. “I try to take it seriously. What does the new year mean? What kind of things do we want to think about as we approach the year to come? For all new year’s, we want to make sure we remember to be reflective and intentional about what we want the new year to bring for us.”

Asked about her hopes for her family in the Year of the Rat, Mates-Muchin said: “This year, for my family, it’s often the same kind of things. A lot of joy, laughter, meaning and contentment. I think we’re all hoping for more peace, understanding and generosity.”