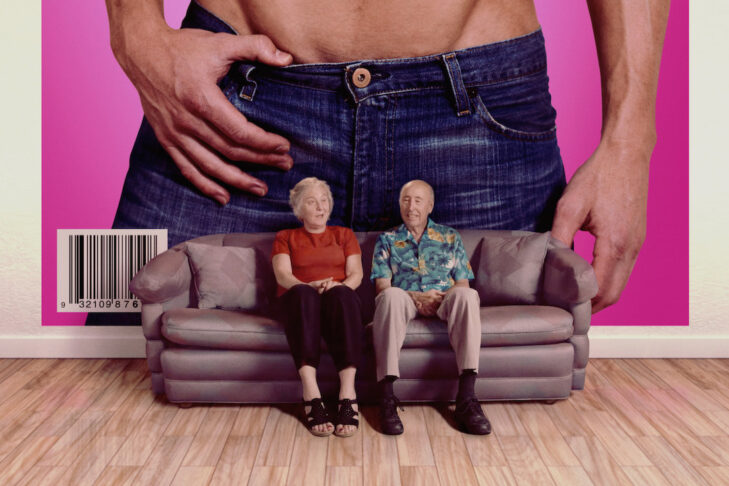 Karen and Barry Mason in “Circus of Books” (Courtesy: Netflix)

Every child would like to think their parents were put on this earth as grownups. They exist to serve. They never did drugs, had sex or possessed real human emotions. This is something we reckon with as we age; eventually, we come to know our parents as nuanced beings who do more than provide food and shelter.

How they stumbled into the business is loosely explored; Karen started as a journalist and Barry worked in TV special effects. They needed money after starting a family and, as one does, answered an ad from Larry Flynt (yes, that Larry Flynt) looking for independent distributors of his magazines. They got the gig and set off on an improbable course, ultimately buying the West Hollywood bookshop and opening another one in Silver Lake. It paid the bills.

“They treated it like they were selling apples from an apple cart,” says one employee.

Along the way, they became known in certain circles as champions of the gay community, keeping on workers even as they were dying of AIDS and often serving as surrogate parents for employees when their own parents kicked them out. “Circus of Books” was more than a bookstore; it was a queer clubhouse where many newly out Angelenos felt safe.

The film’s climax (so to speak) comes when Josh Mason, then a student at Columbia University, recalls telling his parents that he was gay. Barry, true to form, didn’t much care. Karen was troubled. She was a conservative Jew, despite it all, and having a gay son was quite different than running a gay porn shop. It went against her religion. She spent a year contemplating her beliefs and grappling with the reality of her son’s revelation, ultimately deciding that she was going to be the best mother she could be to Josh, conservatism be damned—ultimately becoming a major force within PFLAG. Cut to parades.

It’s a fascinating slice of LA life in the 1980s and 1990s, complete with period music and golden, tattered video footage from Santa Monica Boulevard. But there are many loose ends. Because the story is told as a retrospective—the bookstore has since closed, pushed out of business by the internet and Amazon—there’s an ongoing sense of letdown throughout. We know how the story turns out. For example, Barry and Karen were investigated on obscenity charges by the FBI in the 1980s. Cut to a few damning speeches by Ronald Reagan, a few platitudes from the couple’s vigilant attorney saying what good people Barry and Karen really were—could you imagine smiley Barry in prison?—and it’s all set. Barry had to go down to a parole office once a month to sign some paperwork, but he was never hauled off to jail.

There are nods to the AIDS crisis, too, but the people who could best tell those stories have died. The most moving footage comes on the shop’s last day, when the camera zooms in on one particularly loyal employee, straggly and red-eyed and one of the rare ones who lived, saying goodbye to a customer, a quiet dignity in even the oddest of jobs.

There are other competing threads here: Rachel Mason, for her part, is a leading queer activist in LA partnered with noted transsexual human rights activist Buck Angel, but we never learn how her parents treated her coming-out story; she was simply the artsy one with the artsy friends. And with the store going bankrupt, nudged out of relevance by 2019, we wonder if Barry and Karen have enough money to survive, as they dutifully print out references for their employees on ancient equipment in a musty back room. What will they do next? Did the porn racket provide for a comfortable retirement?

Overall, though, “Circus of Books” mirrors the narrative arc of much of America in the 1980s, 1990s and beyond as it relates to gay life: conflicted or disgusted; ambivalent yet struggling toward compassion; and finally proud. It’s the story of a family, but also of an era.