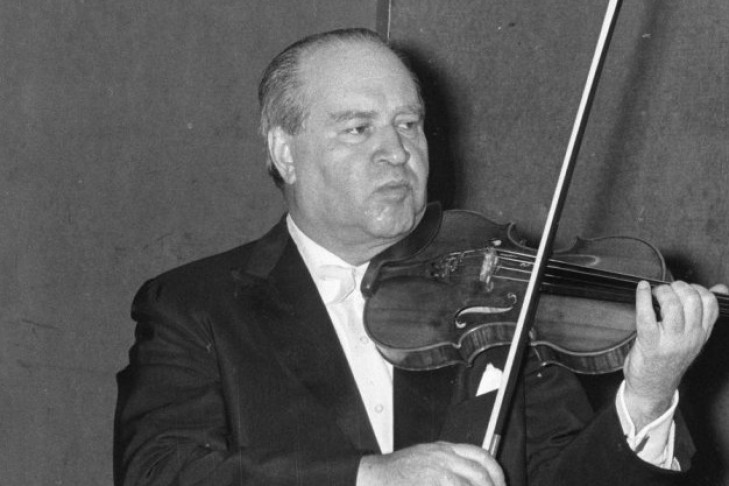 A discussion panel examining the remarkable achievements of the great violinist David Oistrakh (1908-1974). Born and raised in Odessa, Oistrakh became one of the 20th century’s preeminent musical virtuosi. He collaborated with leading musicians and composers of his time, among them Aram Khachatourian and Dmitri Shostakovich. At Moscow Conservatory, Oistrakh taught some of the best Soviet violinists.

The Ukrainian-American violinist Oleh Krysa was long esteemed in the former USSR as a distinguished soloist, chamber musician and teacher. A student of David Oistrakh, Krysa won major prizes in such international competitions as the Wieniawski, Tchaikovsky and Montreal, and was outright winner of the Paganini Competition. Krysa began his teaching career as chairman of the violin department at the Kiev Conservatory and in 1975-1988 was a professor of violin at the Moscow Conservatory. Currently he is professor of violin at the Eastman School of Music in Rochester, New York. Krysa has performed in major music centers throughout the world with leading orchestras, conductors and ensembles. In addition to his solo career, Krysa was leader of the Kiev Conservatory String Quartet (1970-73), Leontovych String Quartet (1999-2003) and Beethoven String Quartet (1977-87). Krysa has recorded on the MELODIYA, BIS, TRITON, OLYMPIA, AMADIS, POLSKIE NAGRANIE, TNC and RUSSIAN DISC labels. Krysa served on the jury panel of the International Tchaikovsky, Wieniawski, Paganini, Kreisler, Oistrakh, Lipizer, Sarasate, Bach, Spohr, Joachim, Sendai, Quingdao and Montreal Violin Competitions. Krysa was married to pianist Tatiana Tchekina, who had been his partner in most of his recitals and recordings over the years before her death in December 2015.

Harlow Robinson is an author, lecturer and Matthews Distinguished University Professor Emeritus of History at Northeastern University, where he also served as chair of the Department of Modern Languages and of the Department of History. His books include “Russians in Hollywood, Hollywood’s Russians” (Northeastern/UPNE); “Sergei Prokofiev: A Biography” (Viking, and four other editions); “Selected Letters of Sergei Prokofiev” (Northeastern); and “The Last Impresario: The Life, Times and Legacy of Sol Hurok” (Viking/Penguin). His articles, essays and reviews have appeared in The New York Times, The Boston Globe, The Los Angeles Times, Opera Quarterly, Opera, Musical America, Slavic Review, Russian Review and elsewhere. As a lecturer, he has appeared at The Boston Symphony, Lincoln Center, New York Philharmonic, San Francisco Symphony, Aspen Music Festival, Bard Festival, Carnegie Hall, Rotterdam Philharmonic, Metropolitan Opera Guild, Metropolitan Museum of Art and the Guggenheim Museum. He has contributed commentary to NPR, WGBH, WNYC, the Metropolitan Opera Saturday Matinee Broadcasts and Canadian Broadcasting Corporation. The recipient of fellowships and grants from the Fulbright Foundation, American Council of Learned Societies, IREX and the Whiting Foundation, he was named in 2010 an Academy Film Scholar by the Academy of Motion Picture Arts and Sciences for a biography of director Lewis Milestone, scheduled to appear in 2019.

Maxim D. Shrayer, born and raised in Moscow, is a bilingual author, scholar and translator. A professor of Russian, English and Jewish studies at Boston College, Shrayer serves as director of the Project on Russian and Eurasian Jewry at Harvard’s Davis Center. Shrayer authored and edited over 15 books in English and Russian, among them the internationally acclaimed memoirs “Leaving Russia: A Jewish Story” and “Waiting for America: A Story of Emigration,” the double biography “Bunin and Nabokov: A History of Rivalry,” the Holocaust study “I SAW IT” and the travelogue “With or Without You.” Shrayer won a 2007 National Jewish Book Award, and in 2012 he received a Guggenheim Fellowship. Shrayer’s “Voices of Jewish-Russian Literature” was published in October 2018.