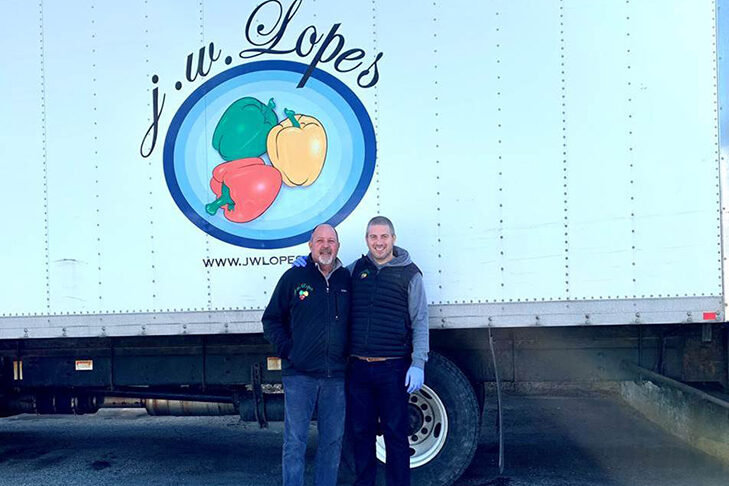 Not much has gone according to plan in 2020. For schools, governments, millions of workers and families, this has been a year of profound uncertainty, if not calamity.

Clearly, there’s no roadmap for managing a pandemic. There is, however, the need to adapt—rapidly—to changing conditions.

We talked to five business owners around Greater Boston who are also members of our Jewish community to discuss how they have found a path forward during one of the most challenging times any of us can remember.

Neil Morris has been in the catering business for a decade. He started Stoughton-based A Perfect Taste to host small events, including shivas and birthdays. Over the years, he built the business into a full-service event company feeding as many as 1,500 people at a time.

In February, Morris heard from friends living in other parts of the world that he should prepare for some major changes; the coronavirus was going to change everything, and sooner than he expected.

“The writing was on the wall for us. By the last week of February or first week of March, we stopped taking deposits and we were in the mode of flipping this upside-down,” Morris said. “We knew we weren’t going to make money during this period, but we needed a plan to keep my staff employed, to keep feeding my family. And we thought about how this would play into what we could do for the community.”

Communal issues include food security. Morris—working with fellow chef Avi Shemtov—decided to tackle it head-on. Early in the pandemic, he began serving prepared meals, salads, entrees and kosher meat to people at cost.

“You might not think that in a town like Sharon things are tough on people, but they are,” he said. “We were happy to be able to fill in the gaps.”

Delivery was the first obvious choice, but as Morris noted, “we had too many orders.” That’s a good problem to have, but it has required a pivot, adding a prepared food pop-up store in Sharon with a mobile ordering platform and curbside pickup.

While Morris realizes there’s no exact timeline for his company to start catering large-scale events anytime soon, he’s confident they will return sooner rather than later.

“It’s important right now to give back. That was the biggest pivot point for us,” he said. “We’ve always served the community, but now that’s our primary focus.”

Event planner Rachel Glazer had between 30 and 40 events scheduled between March and July. Only one actually happened: a bat mitzvah on March 13.

“I knew I had to pivot. Events were just not going to happen,” Glazer said.

Her first idea about pivoting happened at home—her twins celebrated their 12th birthdays. She thought of her vendors and called them.

“I said, ‘Let’s just blow out my lawn with balloons and make it as festive as we can,’” she said. “And the next day, I said to myself, ‘I can do this for other people.’”

The Glazer “blow out” has been on lawns across Greater Boston, easily recognized by festive balloons and yard signs for occasions ranging from wedding anniversaries to birthdays to commemorating a kidney transplant.

And then there are the lawn signs. Since late March, Glazer has created signs for graduates ranging from fifth grade to college; for essential workers, for dads, moms and just about anyone else she can think of. 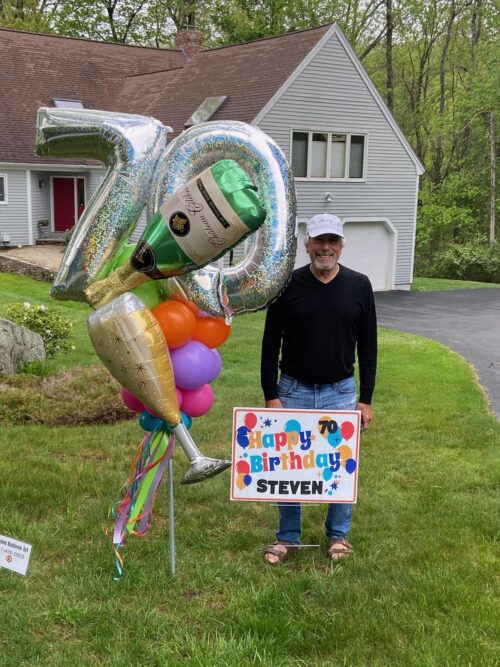 A 70th birthday celebration for all to see, thanks to a “balloon blowout” from Rachel G Events (Photo courtesy of Rachel Glazer)

“We’ve been really successful. People love the balloons and signs and we can make donations to causes. It’s a win-win,” Glazer said. “It’s not so much about the money that I would or wouldn’t make now, but just keeping the brand alive and feeling good and making people happy.”

Navigating the “New Normal” at Catering by Andrew

Andrew Wiener’s storefront on Harvard Street in Brookline is in the heart of one of the largest, most concentrated Jewish populations in Greater Boston. It’s only fitting; after all, his company, Catering by Andrew (CBA), is one of the best-known kosher caterers, serving meals to thousands across the region.

Like many others in his business, however, with in-person events a thing of the past, Wiener wanted to make sure to maintain enough revenue to keep people working.

“We have great skills on our team, and we tried to take our skill set and make it into something available that would bring in at least some revenue,” Wiener said.

It has been a constant pivot, Wiener said. When catered events and in-store pickups were no longer allowed, Wiener changed to contactless pickups and added a nightly takeout menu using companies including GrubHub and DoorDash.

CBA now focuses its efforts largely on weekly Shabbat dinners. Customers order complete meals from the website and pick them up curbside or have them delivered by the CBA team. An assist from Brookline Police helps keep the traffic in front of the CBA facility flowing with two reserved spaces during the Friday rush.

CBA is also working with local rabbis who are helping patients in hospitals receive kosher food, and they were busy in April helping families with Passover meals.

As Wiener noted, these temporary measures are not a substitute for the large events CBA typically caters, but they help maintain their brand while serving the community—and keeping people employed.

“This is the new normal for us,” Wiener said. “I’m looking for the good out of all of this. People are really loving the contactless pickup. We’re happy, we’re healthy. Our team is safe and we have a lot to be thankful for.”

From Produce Wholesale to Home Delivery

For four generations, Jeff Kotzen’s family has been in the wholesale produce business, rooted in the work of his great-grandfather, a Russian immigrant. But, on March 17, the Kotzens lost 75% of their business, called J.W. Lopes, in a single day.

“We were definitely panicked a bit,” said Jeff’s wife, Elyssa Kotzen. “The business just wasn’t there.”

So, Elyssa quickly came up with a way to pivot. She remembered the boxes of produce the family has gifted in the past to friends with new babies or sick relatives and developed the idea of launching a direct-to-consumer produce model. They started with a $75 produce box delivered to customers’ doorsteps throughout Greater Boston, and marketed it through email, social media and word of mouth.

The response was overwhelming—and a new business was born.

Within four weeks of offering the first produce box, the Kotzens created a second brand—New England Country Mart—entirely dedicated to home delivery. They invested in a new ordering and fulfillment system, hired more drivers and warehouse employees and focused on providing customers with fresh produce and improved customer service.

This pivot’s success was a family affair. Jeff’s parents, sisters, brother-in-law and cousin, in addition to Elyssa, were all-hands-on-deck to get the new business off the ground in the first few weeks. Today, they continue to take on new customers, delivering six days a week within the I-495 belt, and to Cape Cod and Newport, Rhode Island.

“We have our moments when we look at each other and ask, ‘How did we get here?’” said Elyssa. “But, at the same time, if we weren’t doing home delivery, where would J.W. Lopes be right now?”

Elyssa said they were glad to be able to move so quickly and create a public health solution to keep people out of grocery stores during the peak of the crisis. They’re also deeply committed to giving back to the local communities they serve, she said. Since the start, the Kotzens have been supporting food pantries and organizations dedicated to assisting unemployed restaurant workers.

Shifting gears is not easy, said Jeff, but the family is grateful for the support of the local community.

“Pandemic or no pandemic, we feel we really have a good business model,” he said. “We view ourselves like the weekend farmers market, but you can buy from us any day of the week.”

Since 1996, Jeff Glassman has owned Darn It!, a quality control/refurbishment and warehouse and distribution business in New Bedford. Since the start, his company has solved thousands of quality control and packaging issues that arise domestically when goods are manufactured overseas.

After 24 years in business, the pandemic changed everything.

With the state shutdown in March, Glassman scaled back to a skeleton crew. Many retailers were closed and the demand for his services slowed.

But Glassman didn’t slow down. Using his overseas manufacturing contacts, he obtained thousands of surgical and N95 masks to donate to area hospitals, nursing homes and first responders. He then helped form a coalition in New Bedford to help hospitals and public service agencies secure the personal protective equipment they needed.

Word spread through Facebook, and the requests for masks kept coming. Glassman kept donating. Sensing the demand was not receding, he shifted his business and launched Darn It! Masks to make comfortable two-ply cotton face masks.

Pivoting to masks “allowed me to sustain my business and keep my employees on the payroll,” he said.

Glassman initially aimed to sell bulk personalized masks to businesses and corporations. Then he began to receive requests for smaller quantities and now sells masks to the public via his website in four- and 12-packs.

“We’re getting a lot of satisfaction from helping out during the pandemic,” he said, noting that he “doesn’t see an end in sight” for producing masks, even as his main business ramps up again.

And he doesn’t want to stop.

“I was lucky enough to have contacts to get this all going,” he said. “It was a chance for me to give back.”

Glassman is offering free shipping on masks to the JewishBoston.com community. Use code “CJP” at checkout.