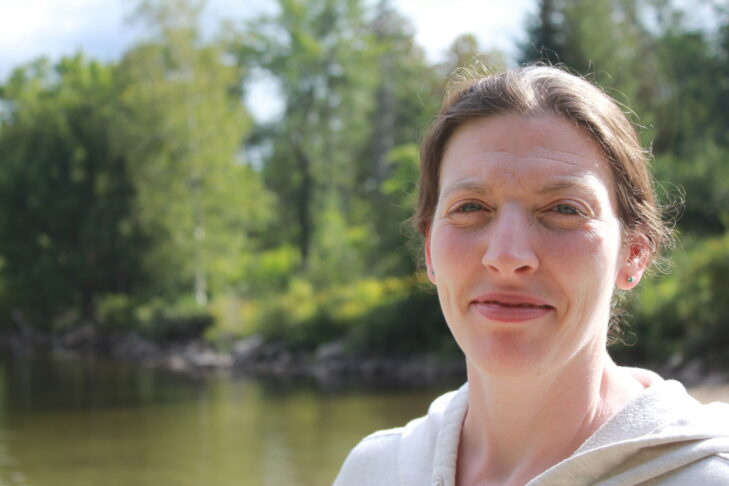 Samarrah Fine Clayman, a social worker and writer based in Lexington, lived every parent’s worst nightmare when her son, Morris, was diagnosed with ependymoma, a pediatric brain tumor, at just 2 years old. Her new picture book “Will Jax Be Home For Thanksgiving?” aims to support families with a child who has been diagnosed with a brain tumor or other critical illness.

While coping with the diagnosis (and trying to parent her 5-year-old daughter), she and her husband noticed a lack of kid-focused resources for parents. All profits from the book’s sale support pediatric brain tumor research through their Ependymoma Research Foundation, which is currently funding a project for $88,532 at Dana Farber Cancer Institute investigating cellular targets that could be amenable to use for immunotherapy.

Happily, 4-year-old Morris is doing well and is getting back to his normal preschool routine. “You might not even know what he’s been through,” she says.

She talked to JewishBoston about the book and her son’s experience.

Every parent wonders: Would I know if my child were seriously ill? What are the signs? How did you first discover that something was wrong with Morris?

My son had always been an active, climbing kid. One weekend, we noticed he was more clumsy than normal. He fell out of bed once. He was playing, and that was unusual. The next day, at the park, he tripped three times. It was odd but not a big thing. His head was slightly tilted to the side, though, so we went to the doctor to check it out. Our primary care doctor didn’t think it was serious, but could tell we were worried, so suggested a CT scan.

After much debate, we did it, and we determined that he had a very large tumor that we wouldn’t have known about otherwise. This was right before Thanksgiving in 2017. He had a nine-hour surgery, and that was followed by six weeks of radiation at Mass General Hospital. It’s a type of cancer that could spread or could come back. That’s always the fear, but the one good thing is that it’s contained within cell walls when they find it, so it can be removed. He’ll get regular scans for the rest of his life. This book aims to help siblings. What kinds of questions did you field from your other child?

My daughter had a lot of questions. She was 4 or 5. She wanted to know what was going on, when he would come home, if he’d be OK. My husband and I were splitting our time between home and the hospital. We had a supportive family to divide and conquer to make her life as normal as possible, but it wasn’t. We kept her out of school for six weeks because it was flu season, and he couldn’t get sick. I asked our child-life specialist and social workers for help. What could I tell her? And there were some books on death and sickness but not for a sibling dealing with brain tumors. Part of why I wrote this was to normalize it. Even in my daughter’s school now, I know a handful of kids with brain tumors, and this is just a small school. A child might run into it with their own friends.

The audience is kids and parents; it’s a picture book for 3 to 8, and I use it as a tool. I did a talk at our preschool for parents about how to talk to kids. It’s very gentle but also honest. My son reads it and is like, “Oh, pretty colors!” He doesn’t ask difficult questions. My daughter has a lot more intense questions, and she’s older.

She wanted to know, “Why him and not me? Am I going to get [a tumor], too?” I try to be very simple and honest. I say, “You know, I don’t know why he got one, it just happens to some kids and to some people.” And it ends there. If there are more questions, I answer them as they come up. She asked a lot about the hospital, what machines do, why certain things were in his room, based on what she was seeing.

How do you cope when you’re scared? How do you project an image of calm?

As an adult, I have a lot more I can be scared about. I know a lot more. I keep that in perspective. When I’m having a hard time or worry about it coming back, I only share what they need to know in the moment. If they bring it up, I will talk about it, but I’m not going to share the statistics of when it could come back or how. They don’t need to know; it’s my own worry. I try to healthfully compartmentalize. I put it in a box, in my head, over there. I show up for my kids and be there, in the moment. That’s what they need from me and what I need from them. We just have to be present.

What do you hope parents take away from the book?

Find support through a support group, clergy, therapist or family. Or a book! We got two copies of “When Good Things Happen to Bad People”; they just appeared. My husband is a doctor and has more info than the average person. He was extra concerned, and I do think asking for help from people when you need it works. I found most of the people we worked with were willing to explain, talk things through, give us suggestions.

Ask until you find someone who is helpful. Especially around here, there are amazing social workers and child-life specialists. They work directly with kids to make the process for them as easy and playful as possible. They bring bubbles, toys, books; they explain things. If you’re going to get a shot, they explain how it will work in a kid-friendly way. They were supportive for us. I also found an online group for this type of tumor. There aren’t a ton of local people, so I found support in that Facebook community.

How do you answer questions you don’t have answers to?

First of all, it’s OK to say, “I don’t know,” and to be OK with not knowing. We don’t like to sit with discomfort, but sometimes you have to be OK with the fact that you don’t know. Nobody really knows. We had a scan coming up, and Morris didn’t want to go to the hospital. He said, “I hate doctors.” It’s a normal reaction. I said, “Well, the doctors are there to help you, and I understand they hurt when they help, and it’s OK to be angry and frustrated.” I let him have that; that’s what he was feeling. If he asks, “Will it come back?” I’d say, “The truth is, I don’t know. But for right now, we are doing everything we can to keep you safe and healthy and will do that for a very, very long time.”