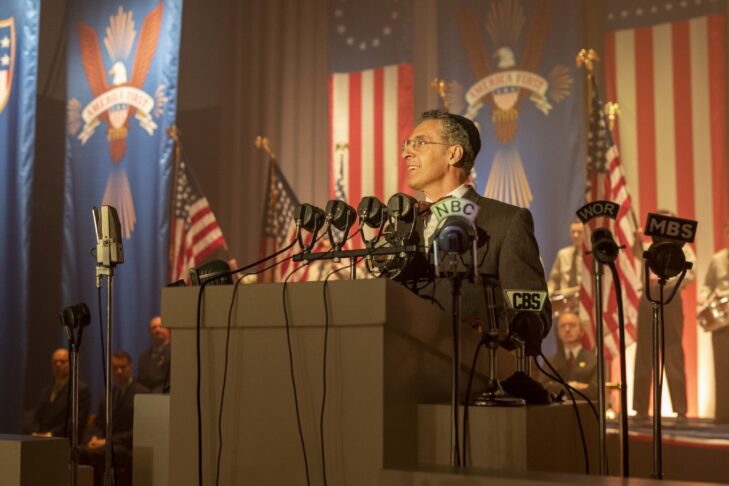 A television adaptation of Philip Roth’s 2002 novel of the same name, HBO’s “The Plot Against America” can feel close to the bone in our current climate. But that doesn’t appear to be the intention of this excellent six-part miniseries, written and produced by David Simon of “The Wire” and his long-time collaborator Ed Burns.

Although Roth used his family name in his work of speculative fiction, in this series the Roths of Summit Avenue—a Jewish enclave of Newark—become the Levins. Morgan Spector plays Herman Levin, ostensibly the head of the house. Spector looks the part of a 1940s leading man, and as things spiral downward, he perfectly modulates Herman’s seething anger. Zoe Kazan plays his levelheaded wife, Bess, who brilliantly reigns in her emotions for the sake of her young sons, Sandy and Philip.

It is June 1940, and a fictionalized Charles Lindbergh, the handsome aviator and isolationist, has ascended onto the political scene. He runs for president on an anti-interventionist platform, even as the Nazis are running rampant in Europe. London is burning and the ongoing genocide of European Jews is pointedly ignored. The United States has no discernible foreign policy except to pander to the Nazis for the sake of an illusory, even dangerous, peace.

We meet the Levins as Herman is beating his weekly sales numbers as a successful insurance salesman. Bess keeps a loving home for the family of four. Sandy is a rebellious teenager and talented artist, sketching Lindbergh behind his father’s back. Philip has amassed a stamp collection that’s the envy of his elementary school friends. The family is on the verge of prosperity. If Herman gets his promotion and Bess works part-time at the local department store, they are within reach of the American dream—homeownership. But achieving that dream is not without its stresses. The family aims to move to nearby Union, which is seemingly a world away from Newark. There appears to be a German American beer hall on every corner, where drunken patrons sing about German pride. 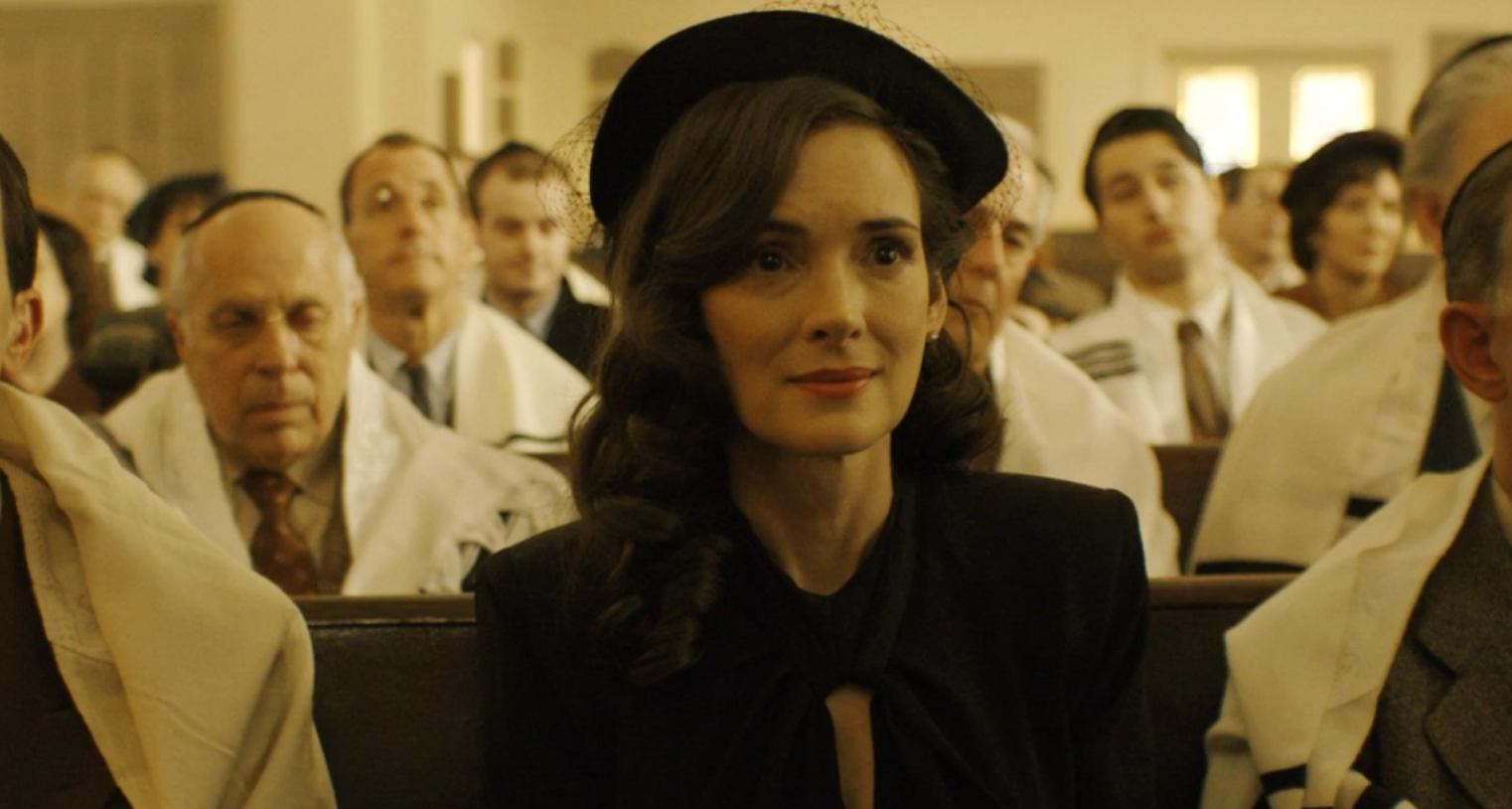 The unthinkable then becomes reality when Lindbergh wins the presidency. His victory brings out Herman’s pugilistic side even more. A Roosevelt Democrat, Herman faithfully listens to Walter Winchell’s nightly broadcasts. He simmers until he finally boils over later in the series. Herman’s orphaned nephew, Alvin, dabbles in petty crime, and like his uncle he is also passionately anti-Lindbergh. He wants to kill Nazis and impulsively enlists in the Canadian army. Bess’ sister, Evelyn (played by Winona Ryder), falls under the spell of Lionel Bengelsdorf, a rabbi and apologist for Lindbergh’s thinly veiled antisemitism and sanitized xenophobia.

John Turturro plays Bengelsdorf to smarmy perfection, and Evelyn, his nervous acolyte, is clearly out of her social depth. Bengelsdorf has a pronounced South Carolina drawl, and his pedigree includes ancestors who proudly fought for the Confederacy. He’s a faux aristocrat, a gentlemanly Jewish cowboy who keeps a horse that he rides in suburban New Jersey. He quickly rises in the Lindbergh administration and tragically misreads his success as security for American Jews.

Bengelsdorf is behind the implementation of a fascist-like program called “Just Folks,” which is designed to bring urban Jewish youth to middle America for a summer. Evelyn is the director of the program and recruits her nephew Sandy to live on a farm in Kentucky. The goal is to replace “city values” with the American values of the heartland. It’s a dog whistle that is loud and clear to Herman, especially when it morphs into a resettlement program for Jewish families.

Evelyn and the rabbi eventually wed and become frequent guests in the Lindbergh White House. In one stomach-churning scene, the Bengelsdorfs are invited to a state dinner honoring Joachim von Ribbentrop, Nazi Germany’s foreign minister.  President Lindbergh snubs Bengelsdorf at the dinner, which the rabbi lightly brushes off, while Evelyn shares a dance for the newsreel cameras with von Ribbentrop. At one point, Philip sneaks into a movie house to see the clip of his aunt cavorting with Nazis. 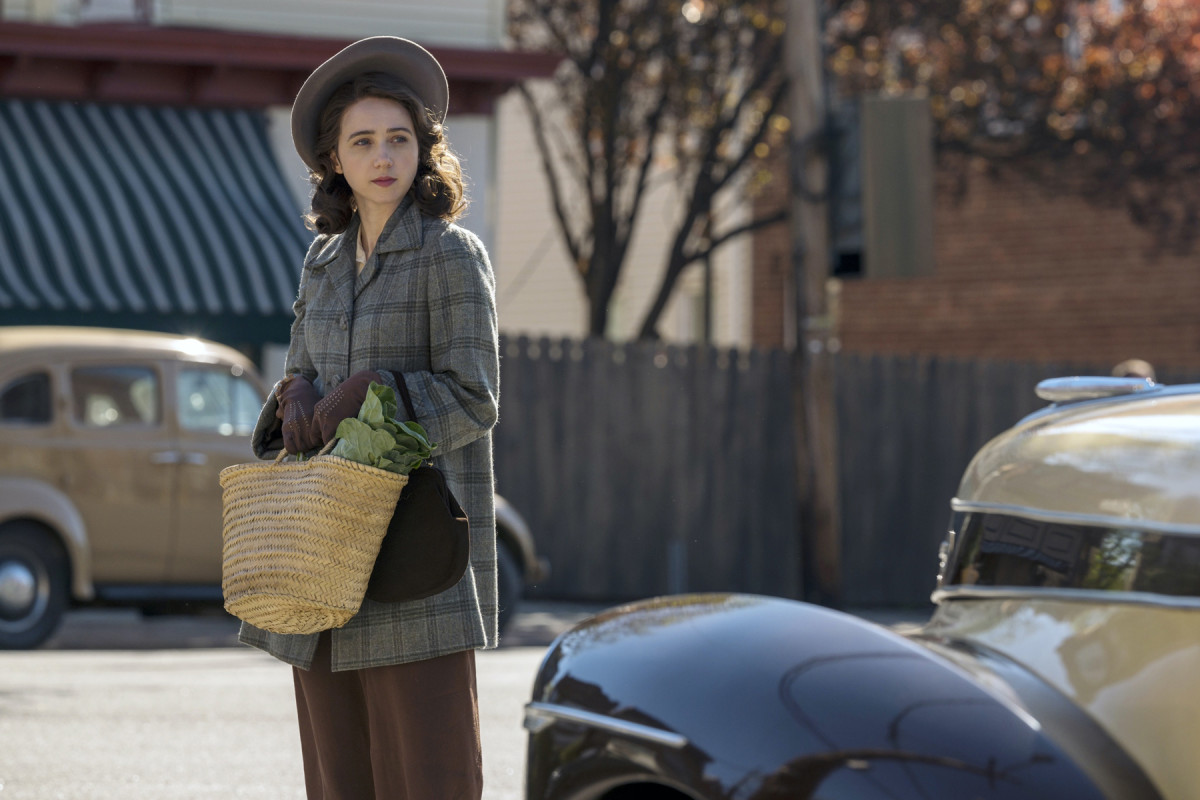 Throughout “The Plot Against America,” Herman is defiant. He is a proud American Jew who refuses to flee to Canada. One of the more telling episodes in the series is a family trip to Washington, D.C., where it’s evident that America’s democracy, its cherished pluralism, is unraveling. The city has the feel of a dystopian film set with famous monuments that are paeans to a fallen society. A pro-Lindbergh tourist overhears Herman’s disgust at what’s happening to his beloved country; the two almost come to blows when the man calls Herman a “mouthy Jew.” The family is further humiliated when they’re turned out of their hotel.

The fascist takeover of America, gradual as it is, reaches a fever pitch in the last couple of episodes. It’s tense, compelling television that presents an America where the police turn a blind eye to violent counter-protesters, synagogues are set ablaze and swastikas deface Jewish graves.

While the feeling of “it can’t happen here” lurks throughout the series, the ambiguous ending offers no decisive answers. The rise of fascism is banal until it’s terrifying. While it’s hard to ignore the eerie prescience of Roth’s book altogether, Simon and Burns present “The Plot Against America” as a story rooted very much in its era. There is no concerted effort to connect it to contemporary America—they leave it to their viewers to do that. This is a political thriller mixed with family drama, one that elicits more of a “what if” response rather than a denial of the events at hand.