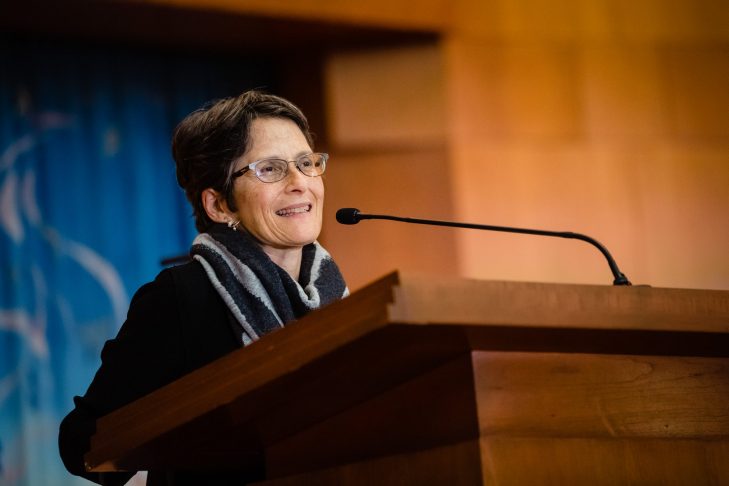 Rabbi Sharon Cohen Anisfeld was installed last week as Hebrew College’s ninth president in a ceremony that took place at Temple Emanuel in Newton. Anisfeld, the first woman to hold the position of president at Hebrew College, was feted by her students, members of the community and national leaders. She comes to her new role—Anisfeld was previously the dean of the college’s rabbinical school—as the 97-year-old institution looks to the future, which includes an eventual move to another campus.

CJP’s president, Rabbi Marc Baker, was among the leaders on hand to praise Anisfeld. “We are so blessed,” said Baker, “to have Sharon Cohen Anisfeld at the helm of Hebrew College.” Those participating in the evening of celebration expressed similar sentiments. Three former students, now prominent leaders in the Jewish community, made up a panel moderated by Jed Handelsman Shugerman, a professor of law at Fordham University. The panel members included Idit Klein, founding executive director of Keshet, Yehuda Kurtzer, president of the Shalom Hartman Institute of North America, and Rabbi Angela Warnick Buchdahl, senior rabbi at the Central Synagogue in New York City. Each had warm memories of interacting with Anisfeld.

“There is a direct link between the moment Sharon became my rabbi and the leader I am today,” said Klein. She lauded Anisfeld for a “powerful leadership that can come from gentleness and humility and relationship.” Klein further noted that during Anisfeld’s tenure as both a Hillel rabbi and teacher, she made her classroom and any bima she was gracing a welcoming and safe space for LGBTQ Jews.

Buchdahl asserted that Anisfeld “turned my head around about what women’s rabbinic leadership looked like.” Anisfeld, she said, demonstrated “a different kind of power and interaction with the text. On the bima, she had spiritual gravitas.” She further noted that she often asks herself, “What would Sharon do?” in challenging situations. Kurtzer, who hails from the Modern Orthodox community, noted that Anisfeld “transformed the image for me of what a rabbi and the nature of what authority in a rabbi was supposed to look like.”

Rabbi Art Green, Hebrew College’s rector, installed Anisfeld to her new position. He described the new president as “carrying forth a vision of articulating and training [at Hebrew College].” Green observed that Anisfeld “was ready for this role, and we happily place our trust in you as captain of our ship. …You are the one who will lead our vessel to new shores both physically in finding us a new home, and in spirit as the years go forward. We offer you our collective blessing and support in this great effort.”

Anisfeld addressed the crowd of over 600 people with words from the week’s Torah portion. “L’ech l’cha. These are God’s opening words to Abraham,” she said. “The journeys forward and inward are simultaneous and inseparable. ‘Go forth’ reverberates with divine urgency.” She further explained the journey that students and faculty undertake at Hebrew College is one that “is not formulaic or predictable. We can find our way only when we’re honest about our own questions, our own longings and our own lives.”

Reflecting Anisfeld’s lifelong passions, the installation was suffused with a love of Torah, Hebrew language and a recognition that each person carries a spark of the Divine. The evening ended with a spiritual charge to her audience: “May we be of service to the one whose loving kindness connects and embraces us all,” she said. “It is this awareness that will continue to inform the vision and suffuse the spirit of learning and leadership at Hebrew College. It is this awareness that I hope you will carry with you as you leave here this evening, inspired to become part of the next chapter of our sacred journey. We hear the call of L’ech l’cha, and we say Hineini—Here I am; here we are. Let us go forth together.”