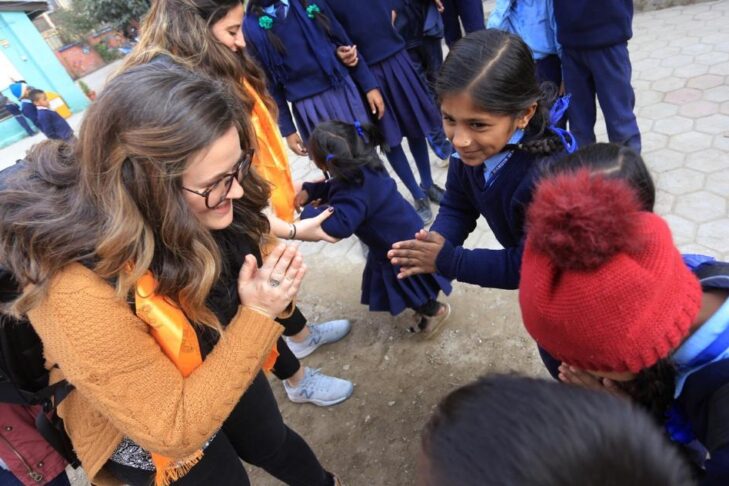 This morning, I awoke to find myself in a new country and in a new decade. It began with a sense of relief to finally have slept more than three consecutive hours in a horizontal bed after two days of travel. I was treated to a wonderful Nepalese breakfast (rice, curry and an omelette made to order). After breakfast, we began the morning as a group working to define the term “global Jewish citizenship.” The Torah tells us to care for the other and the stranger, but what does that really mean and how can we do that with a Jewish lens?

Though my definition is in no way complete, here’s what I came up with: “Global Jewish citizenship is a state of intention in which one makes mindful micro-choices that foster open dialogue, cross-religious partnerships and international responsibility that can change a moment or change the world.”

Are we going to change the world on this trip? Likely not. But the simple and intentional decision to visit Nepal as a global Jewish citizen is a mindful micro-choice that each of us made to try to do better, to learn more and to understand our covenant with the other humans on earth.

After the session, we left the hotel to see a city come to life in Kathmandu. Bustling streets full of cars, motorcyclists, bicyclists and pedestrians filled the streets to celebrate the first day of the Ministry of Tourism’s new initiative to bring 1 million new tourists to Nepal in 2020.

After a short walk down the road, we arrived at the Embassy of Israel in Nepal, where we were greeted by Ambassador Benny Omer and Deputy Ambassador Tal Schwartzman. The embassy was established 60 years ago, only 12 years after the creation of the State of Israel. Nepal is described by many as a land-locked country lying along the southern slopes of the Himalayas and sandwiched between China and India. But Ambassador Omer advised us to consider Nepal as land-linked; a country with many partnerships. In fact, Nepal and Israel are linked in more ways than one. Israel, for instance, has the lowest point on earth (the Dead Sea) and Nepal has the highest (Mount Everest).

It was here that we learned about MASHAV, Israel’s Agency for International Development Cooperation. Through this partnership, Nepalese farmers are sent to Israel to learn irrigation techniques in order to help them increase their yield. Another initiative was to donate rice and lentils to a local government school serving low-income families so the school can provide free lunches and boost student enrollment. 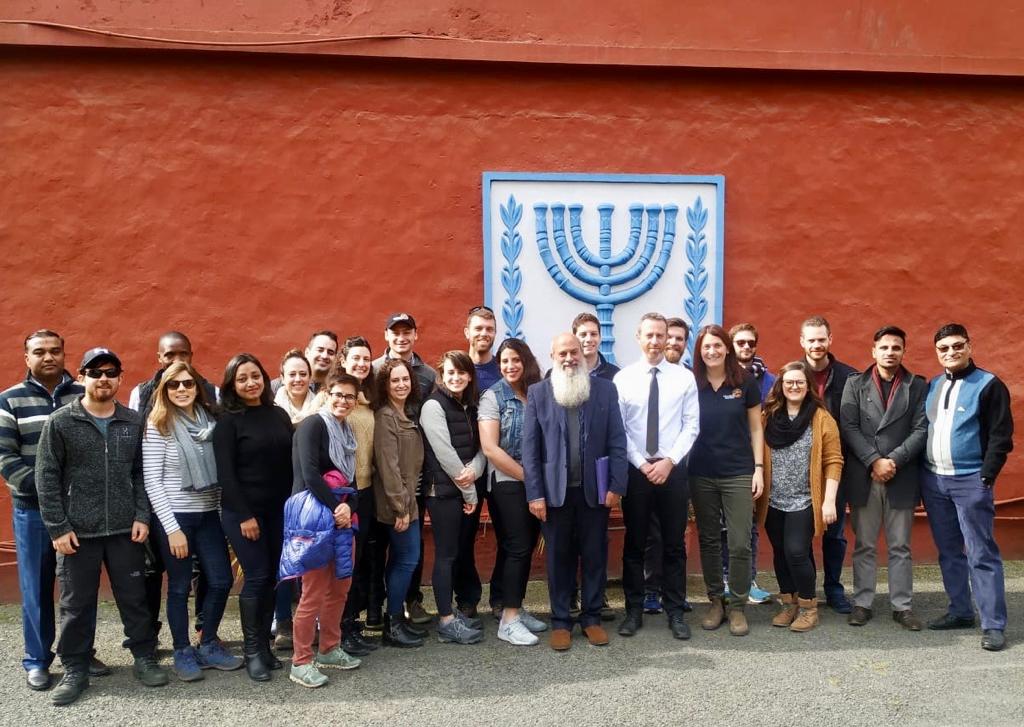 From there, we walked to lunch and met with Dr. Ravindra Kumar Shakya, president of the Shalom Club Nepal (a forum for MASHAV alumni) and former vice chairman of the National Planning Commission of the Nepali government. He told us about a peace march he organized on Yom Ha’Atzmaut (Israeli Independence Day) and shared his dream that one day Nepal will become as strong as Israel. He ended by sharing his belief that education is the backbone of development. Accompanied by Dr. Shakya, we continued to our next destination, the Shanti Shikshya Mandir School, where we met with principal Sudam Gautam and his teaching staff.

Approaching its 70th birthday, Shanti Shikshya Mandir School is a school for children ages 3 to 16 and is a recipient of the lunch program through the Israeli embassy. Serving the poorest of the poor, the free lunch program has increased the number of students who attend from 60 to 310. I was told that the school can be translated as the “Peace School” and the wall is adorned with the phrase, “If you can dream it, you can do it.”

When we entered, we were greeted by these 310 smiling faces, excited to say “namaste” to their new friends and sing songs for them. Each student was proud to show off their school logo—a hexagram, known to many of us as the Star of David. This star represents the Goddess of Education in Nepal, a beautiful connection between Jews and the Nepalese. With just a few small school rooms, these students have a passion for education and a zeal for life. Currently, I serve as the director of community engagement at Epstein Hillel School in Marblehead, so I was particularly interested to learn about the unique challenges the school faces. With bursting enrollment and extremely limited government funding, the principal struggles to provide basic school supplies and necessities.

We finished our evening in Kathmandu, which today I learned means “wooden temple city” in Nepalese, in Durbar Square, where the city’s ancient kings once ruled. Though many of these ancient temples collapsed in the 2015 earthquake, many remain, including Kumari Ghar, the palace of the living Hindu goddess Kumari. The power of the Kumari is perceived to be so strong that even a glimpse of her is believed to bring good fortune. As luck would have it, we were there to see the 6-year-old goddess emerge from her window, only for a few seconds, and with her other-worldly powers, Project Inspire was blessed for the days ahead.

As the sun sets on the first day of the new year, the new decade, I can’t help but be in awe of the enormous responsibility I carry as a global Jewish citizen. There is so much pain and suffering in this world, but there is also joy, happiness and promise for new beginnings, new partnerships and lovingkindness. What better place to begin this journey than in Nepal with Project Inspire? 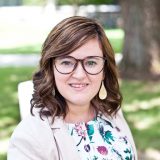 Deryn Pressman-Mashin
Deryn Rae Pressman-Mashin is a violinist and Jewish community organizer. A New York native who grew up in Florida, with additional careers in Tennessee and Israel, Deryn graduated from Brandeis University with an MBA in nonprofit management from the Heller School for Social Policy and Management and an MA from the Hornstein Program for Jewish Professional Leadership. Having learned to read music before she could read words, a passion for creative expression developed early on. As a lifelong musician, Deryn’s practice has led her to a variety of careers, from founding a student nonprofit music organization to volunteering in Dresden, Germany, as a teaching artist to studying abroad in Panama and later to Tel Aviv and Haifa, where she became active in nurturing Jewish identity and leadership. Deryn is the director of community engagement at Epstein Hillel School in Marblehead and lives with her husband, Eivgeni, and dog, Krembo, in Salem.