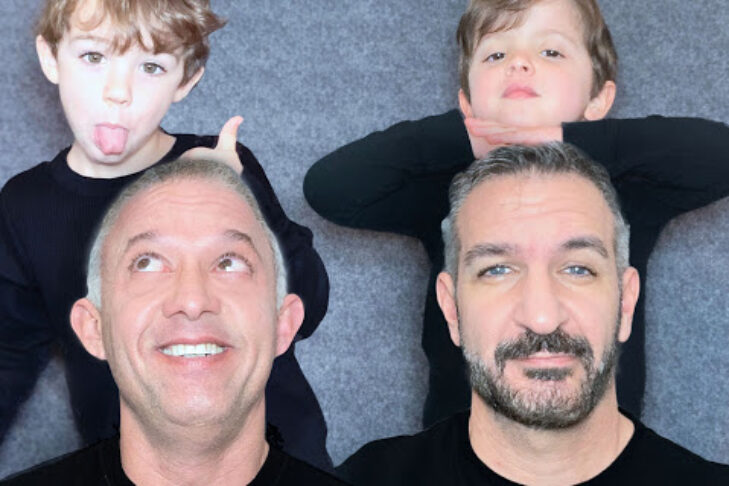 This week, I had the incredible pleasure of talking with Alex Maghen and Yanir Dekel of “Daddy Squared,” a parenting podcast that explores the ups and downs of having children in this uncertain world.

What inspired the two of you to start “Daddy Squared”?

Yanir: “Daddy Squared” actually started as a blog after I wrote a column for HuffPost and received a lot of good responses. After blogging for more than a year, I ran into a podcast called “Homo Sapiens,” then hosted by Will Young and Chris Sweeney. This, alongside my longtime craving to develop my radio production experience, inspired me into a podcast about gay dads. My second thought was that if Alex wasn’t going to do this with me, I’m not going to do it at all. There was something about us being a couple that creates an on-air dynamic that can’t be achieved, I think, if you are just friends.

Alex: This was Yan’s idea, but the moment he suggested it I said yes. This was at the beginning of the second year of our twins’ lives. I was literally forcing conversations with random, uncomfortable strangers on the streets about the lunacy of parenting. This seemed like an outlet less likely to result in arrest.

How has the podcast evolved over the three years you’ve been recording?

Alex: One thing’s for sure: The production quality is infinitely better than in Season 1! More meaningfully, this podcast has grown up with our children—and with us as new parents—and while episode subjects grow and change, I think there’s something special about how we express ourselves as parents of 2-year-olds, then 3-year-olds, and now 4-year-olds. Note: 4 is so much better!

What’s a parenting story you love to tell?

Alex: I work at Warner Bros., and that’s entirely from home these days because of COVID-19. On one of the endless Zoom meetings, this one with some top executives, my son Ben burst into my office and marched up to me. “Ben, honey,” I said to him while the various WB people waved, “You know you’re not supposed to come in here while I’m working.” Ignoring this completely, he said: “Look, Daddy: WHAT is Madonna’s middle name?!” I froze in terror. Why? Because all of these big shots know I’m gay and I had to admit before the whole crowd that I just didn’t know. Oh, the shame! “LOUISE!” most of the people on the call screamed. “Thank you, Daddy’s people. Bye,” he said, and walked out!

Can you talk a little about your series “Gay Dads Save the World”?

Alex: Perhaps it’d be wise to clarify that we’re not suggesting—in that series or in any other episodes—that gay men are better. We may think it—we’re not sure—we’re working on the question in therapy. During this terrible pandemic, millions of people are on the frontlines in so many ways, and they’re straight and trans and Black and white and Muslim and whatever, but since our show is specifically about gay dads, we wanted our listeners to hear how much we have to be proud of, but also the simply crazy variety there is in what gay men do. And we, ourselves, were shocked. What an incredibly rich community in every nook and corner of the U.S., and everywhere.

Yanir: We had on our show gay dads who are doing all kinds of essential things: from Amazon delivery manager to COVID-19 drug developer. Doctors, nurses, grocery store managers…that’s why we called this mini season “Gay Dads Save the World.” Where would society be without them?!

What guest would you love to have on the show?

Yanir: I have two dream guests: one is Alyssa Milano and the other is Busy Phillips. They’re both very different from each other, but they are both moms and they have a vibe of authenticity that I think our audience can definitely relate to. We love talking about the bad stuff in parenting, we love legitimizing the fact that we’re all imperfect, that being a parent is not roses all the time, and from what I’ve heard those two talk about it in a way that lifts some sort of a burden off of you that demands of you to be perfect, joyous and at ease all the time.

I’m also very passionate about bringing Einat Natan to our audience. She’s an Israeli parenting coach, and her insights are wonderful and really aren’t like anything I’ve heard in America. I’ve recently chatted with her on social media and she told me that her book is about to be published in English, which, I think, will help a lot of parents here feel better about themselves.

When I became a parent I was suddenly exposed to this pressure that parents don’t talk about very often, but you always have this pressure to be considered “a good parent” and “not f*%& up your kids” and stuff like that. It’s like many parents have insecurity about parenting, and we support the stream of parents who say, “Hey, parenting sucks sometimes, and kids can be assholes, and that’s all OK.”

Has Judaism influenced your parenting? If so, how?

Alex: Yan and I are both Jews; I have a deep love of our people, history and tradition, while Yan really doesn’t feel that attachment. Still, my thinking is he may not feel the attachment, but its influence is all over both of us.

It’s funny, though; your question is if Judaism has influenced our parenting. I feel like turning your question around: Has our parenting influenced Judaism? And God, I hope so! The Jewish people have come a long way in their acceptance of homosexuality—a life expressly forbidden in our Bible—and I have seen so much evidence in the short years since my kids were born that mine and Yan’s lives and fatherhood—and those of so many other gay Jewish parents—has touched our people in real and lasting ways.

What’s the best piece of parenting advice you’ve ever received?

Yanir: Before my kids were born, my Israeli BFF said something that stuck with me. She said: “The most important thing is to respect your kids. Don’t demand respect from them, just respect them. Their feelings, what they want, what they say.”

I then started seeing parents who changed their voice to “cute voice” when they speak to their kids, or dismiss stuff that their little ones tell them, and I don’t do that. I made a decision to speak to my kids like I speak to my family or my friends, and stuck to it.

Alex: “You must make sure they drink a lot. You do not have to worry that they’re not eating enough.” This is from our pediatrician, bless her. I wish my husband took this advice!

????️‍???? Visibility is important, and not only in Pride Month. Because the more they see us, the easier it will be for them to understand that we are all the same, and that #familyisfamily ????️‍???? We’re trying to build an archive of children’s books with #gaydads characters. Search “Tiny Library” on daddysqr.com and let us know if there’s a book we’ve forgotten ????‍♂️ #books #childrensbooks #diversity #pride #twodads

You can find “Daddy Squared” on Apple Podcasts and Instagram.