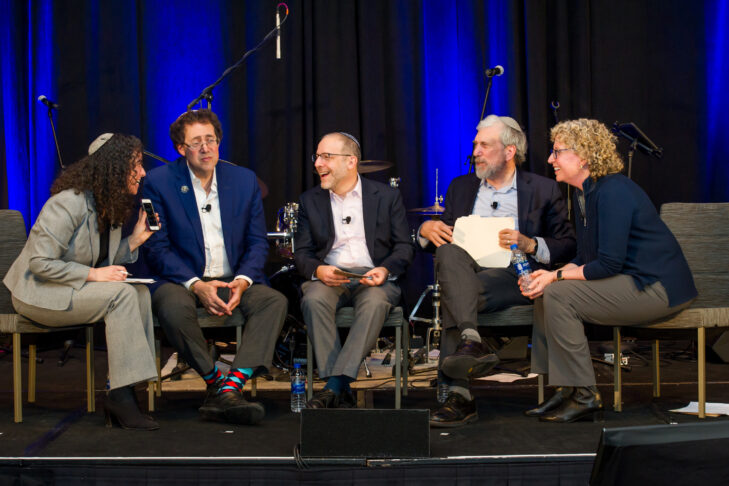 The Torah portion for the week of “20/20 Judaism,” a collaborative convention of United Synagogue of Conservative Judaism and the Rabbinical Assembly, was very apt. Jacob wrestles with a mysterious angel, and from that encounter the nation of Israel emerges. The biblical image dovetails with both the occurrence and grappling of a Conservative movement at a crossroads—a movement that is finding its way as demographics shift for Jews and the personal and political meld together.

Over the course of four-and-a-half days in Boston, 1,400 synagogue and day school professionals from 280 congregations, 40 North American states and places as far away as Australia, Poland, South Africa and Latin America came together “to seek meaning together and share the every essence of shared Jewish stories and peoplehood.”

The convention featured New York Times opinion columnist and author Bari Weiss and IKAR founder Rabbi Sharon Brous—eloquent speakers who received standing ovations—both of whom bolstered the movement’s vision of itself in the 21st century. Each of these women laid out a thoughtful, proactive and engaged Judaism—a practical yet inspiring Judaism that answers some of the pressing needs of the 21st-century Jew. “I envision synagogues as sacred excavation sites,” said Brous, “sites to reclaim a Torah of hope and meaning. Judaism calls us into the world to dismantle oppressive systems. Inaction is the mortar that keeps them standing.”

Brous further called for a reintroduction of ancient rituals into Jewish life and a reinvigoration of Shabbat observance. She boldly laid out “what Jewish tradition offers us and demands of us. Thoughts and prayers are Jewish escapism. We need to sharpen the tools that help us to respond courageously, compassionately and Jewishly to moral crises. Jewish tradition fuels us; it gives us breath in breathless times.” The advent of domestic antisemitism was very much on Weiss’s mind. “The rising antisemitism of today is what our ancestors endured, and it’s what others have endured throughout the world,” she said. “Now it happens here in Pittsburgh and Poway.” Weiss delivered her remarks the Sunday before the brutal murders of four people connected to a kosher grocery store in Jersey City, New Jersey.

By all rights, Weiss asserted, the Jews should have gone the way of the Hittites and the Moabites. She paraphrased Rabbi Joseph Soloveitchik, who said that Jewish survival makes the case for God. Our very earthly existence is more miraculous than the parting of the Red Sea. Weiss also claimed that Jewish survival depends on educating the next generation. To accomplish that ambitious goal, she declared that day school education and Jewish camps should be free and that Hebrew should be a common language of the Jewish people. “Literacy is at the center of Jewish life,” she said.

Throughout the convention, topics as eclectic as growing one’s spiritual life to grandparenting through a Jewish lens to fundraising for the 21st-century synagogue offered a look into the challenges and joys of staking out a Conservative Jewish place in the overall Jewish ecosystem.

Rabbi Debra Newman Kamin, president of the Rabbinical Assembly, urged conventioneers to share their light. In the spirit of Hanukkah, Newman Kamin asserted: “This is a time to rebuild, rekindle and rededicate. We can spread the light of one candle at a time, and one candle can light other candles.” Interfaith issues were front and center at a well-attended panel called “The Things We Need to Say About Inclusion.” Rabbis Wesley Gardenswartz and Elliot Cosgrove, who serve large Conservative congregations in suburban Boston and Manhattan, respectively, and Dr. Keren McGinity, director of InterfaithFamily’s Jewish Engagement Program at Hebrew College and the author of two books on intermarriage in American Jewish life, debated the place of interfaith families in Conservative Judaism.

Cosgrove countered that “the Conservative movement should position itself as a movement of conversion. A Jewish household is made up of two people who are halachically Jewish [according to Jewish law]. It’s not the responsibility of a movement to serve everyone. We have to stand for something. If we stand for everything, we risk standing for nothing.”

McGinity noted that faith and commitment need to replace fear and pessimism. Conservative Jews, she said, have to free themselves from the negative narrative that lays out unfounded fears of survival. “The freedom to marry whom one falls in love with should be compatible with Conservative Judaism in the 21st century,” she said. “Interfaith couples enrich our communities, rather than silence Judaism.” McGinity agreed with Gardenswartz that interfaith couples seeking a Conservative rabbi to bless their union “must be open to living a Jewish life and raising Jewish children if they choose to have them.”