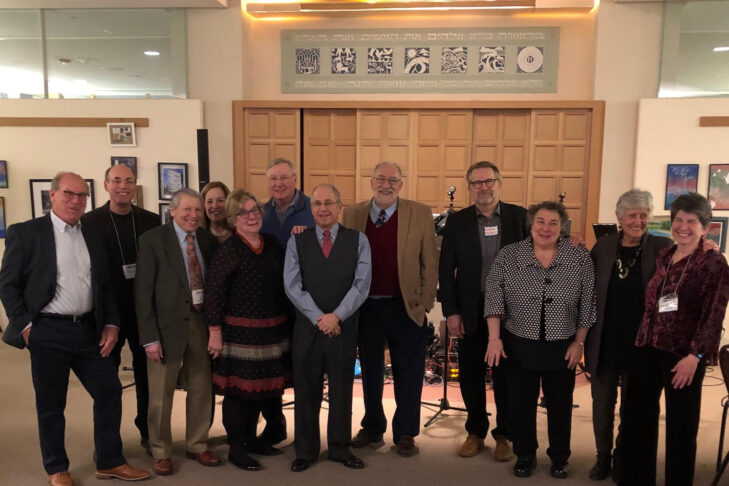 Congregation Kerem Shalom joyfully celebrated 30 years of providing a center for Jewish life in the Concord community with a full weekend of events.

Kerem Shalom began with four families in 1968 as the Concord-Lincoln Study Group, and later became the Concord-Lincoln Jewish Group. During the 1970s, programs grew to include adult education and non-religious social events, and the group renamed itself the Concord Area Jewish Group (CAJG). In the late 1970s, CAJG held its first Shabbat service, led by a Brandeis student. The success of the service deepened the community’s hunger for a richer, consistent community life including High Holiday services and a permanent Hebrew school. The decision was made to hire Rabbi Michael Luckens, who went on to serve the congregation for more than 30 years.

By 1980, the 80 member families of CAJG were holding bar/bat mitzvah services, High Holiday services and occasional Shabbat services and had created their own prayer book. Outgrowing the community center they had rented, in 1981 CAJG began renting space from First Parish in Concord. The next year, they purchased their first Torah—and in 1987 they purchased land in Concord to build a synagogue.

The completed synagogue was dedicated in 1989, and to commemorate this transition, CAJG formally became Kerem Shalom, Vineyard of Peace, as it is known today. The dedication was celebrated community-wide with hundreds of families walking down Elm Street, members taking turns carrying the Torah and a klezmer band for accompaniment. They walked through the center of Concord, from the First Parish to their new home, Kerem Shalom.

Today, Kerem Shalom is a vibrant congregation serving Concord and the greater surrounding area, and offers a full range of programming and Hebrew school.

To commemorate its 30th birthday, Kerem Shalom’s festivities began with a special Shabbat service honoring founding families. Former board presidents Cherry Muse and Lloyd Simon and board president Elisabeth Sackton shared memories of the history and growth of the synagogue and thanked founding families for the role they have played in Kerem Shalom’s success. Congregants were treated to a presentation by the Kerem Shalom ASL choir, directed by Rabbi Darby Leigh, and the service was followed by a festive oneg celebration.

The following evening, a reception was held for the community featuring music by Acton Music Project, dancing and raffle prizes. Former president David Orlinoff served as master of ceremonies and invited others to come to the microphone to share their thoughts and memories. Those who were so moved included former board presidents Susan Markson, Paul Waldeck, Marty Plotkin and Amir Viskin; capital campaign chair Neil Markson; and other members of the congregation. Cantor Rosalie Gerut moved the crowd with a beautiful song she had written for Kerem Shalom’s building dedication. A slideshow with photos from the building’s dedication took celebrants down memory lane over the past three decades of the congregation’s history. The community enjoyed appetizers and desserts prepared by the Kerem Shalom Volunteer Catering Crew, with delicious additions from donors.