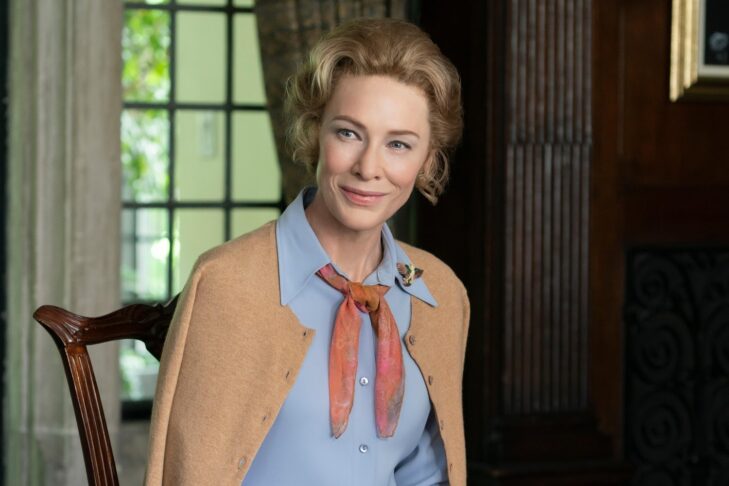 The stakes are established early on in the Hulu docuseries “Mrs. America” when Betty Friedan shouts, “Who the hell is Phyllis Schaffly?” Friedan, author of the classic “The Feminine Mystique” published in 1963, was a leading figure in the women’s movement. At that moment, she had not only mispronounced Schlafly’s name, but she had grossly underestimated the latter’s growing influence on white American conservatism.

Schlafly first appears on screen in a bikini competition at a charity fundraiser and is introduced as “the wife of one of our biggest donors, Mrs. J. Fred Schlafly.” It is 1970, and Schlafly, the mother of six children and a Radcliffe graduate, has a failed congressional bid behind her and can’t get her foot in the door as an advisor to former presidential candidate Barry Goldwater.

Cate Blanchett plays Schlafly with propped-up elegance and bottled-up ambition. Blanchett is joined by an outstanding ensemble cast featuring Margo Martindale as the activist and politician Bella Abzug, Tracy Ullman as Friedan and Uzo Aduba as the trailblazing Shirley Chisholm, the first black woman elected to Congress and the first to run for president. Sarah Paulson is Alice, Schlafly’s acolyte, a fictional character cooked up to represent the elite white women whom Schlafly targets in her fight against the Equal Rights Amendment. Rose Byrne, however, does a disappointing turn as Gloria Steinem—founder of Ms. Magazine and poster woman for second-wave feminism. With her long hair parted in the middle and her signature aviator glasses, Byrne’s portrayal rarely rises above caricature.

By 1972, over 30 states had ratified the ERA, and momentum was building for its inevitable passage. In her kitchen in Alton, Illinois, Schlafly is publishing opposition research mainly about security issues in her homespun newsletter, “The Phyllis Schlafly Report.” Her conservatism does not gain traction until her friend Alice, sitting next to Schlafly under the dryer in a beauty salon, brings the “libbers” and their primary cause, the ERA, to Schlafly’s attention. When Alice claims the passage of the amendment will force “our daughters” into the draft, Schlafly has found a cause to rail on and expand her influence.

Fear-mongering turns out to be Schlafly’s most effective strategy, and she deploys it deftly in her “STOP ERA” campaign—STOP being an acronym for “Stop Taking Our Privileges.” What seems to begin as a kitschy stunt has garnered national media attention for Schlafly. Her mailing list is expanding, and her newsletter gets a new name, “The Eagle Forum.”

A lot of the narrative energy in “Mrs. America” is diverted into portraying Schlafly and her growing movement. The rest of the storyline covers the major players of second-wave feminism almost as an afterthought. There are flashes of the hat-wearing Abzug as the pushy Jewish mother of the group. Jill Ruckelhaus (played by Elizabeth Banks) is the only Republican in the caucus. Her pro-ERA, pro-choice stances recall the last gasps of bipartisanship in the country. Aduba’s excellent performance as Chisholm brings forward the whiteness of the early feminist movement as Abzug chides Chisholm for continuing her presidential campaign against the odds. Chisholm strongly responds, “I didn’t get anywhere in this life waiting on someone’s permission.”

Ironically, neither did Schlafly. To protect the way of life for white upper-middle-class homemakers, Schlafly brings her crusade to lecture halls, state capitols and ultimately to the halls of Congress. Her industry begins to look a lot like a full-time career. Her husband is not happy with her frequent absences, but Schlafly forges on, ironically channeling Chisholm on not waiting for anyone’s permission. Schlafly further rankles her husband when she enrolls in law school in her 50s. Her husband views Schlafly attending law school as useless. However, it’s just another example of Schlafly’s ambition masquerading as an antidote to the “libbers’” ongoing battle for gender equality.

The series’ last episode takes place in 1980 at the National Women’s Conference in Houston. Feeling out of place within her group, Alice unknowingly befriends a religious yet pro-ERA woman at the bar. The woman offers her a psychedelic drug to calm her woes, and Alice immediately has a looking-glass experience. In a blurry sequence of events, Alice crashes a Pete Seeger sing-along with feminists and takes communion from a nun. A few miles out of town, Schlafly’s supporters are gathering to protest the convention. Schlafly claims the protest drew more attendees than the conference, despite evidence to the contrary.

By the end, “Mrs. America” gives us the answer to Friedan’s question, “Who the hell is Phyllis Schaffly?” She’s the woman who derailed the ERA, a popular piece of bipartisan legislation. The ERA, however, is back in the news with both houses of the Virginia legislature ratifying the amendment this past January. Supporters are hoping the action will make the amendment part of the federal Constitution.

“Mrs. America” is streaming on Hulu. A fascinating discussion of the show and its historical timeline from the Jewish Women’s Archive can be found here.