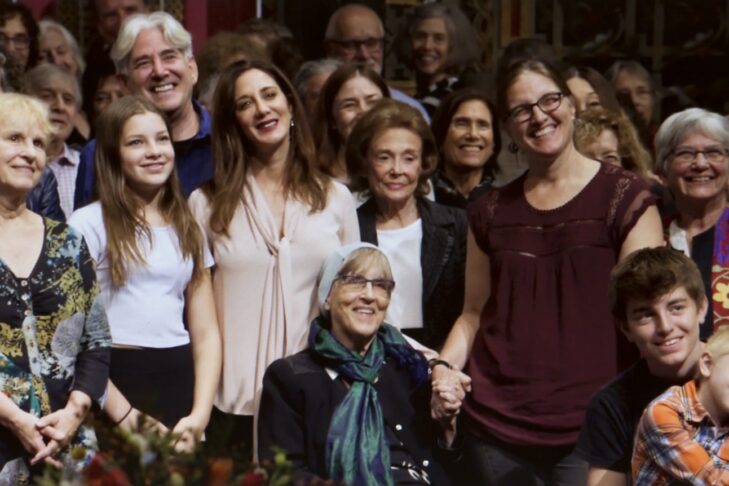 Paula Weiman-Kelman’s intimate documentary, “Dying Doesn’t Feel Like What I’m Doing,” is a tribute to her friend Rabbi Rachel Cowan. In this powerful film, Weiman-Kelman outlines the contours of Cowan’s remarkable life and her quiet bravery in the face of terminal brain cancer. The film does not rely on testimonials; only Cowan speaks at length at the meditation sessions she leads or the thoughtful answers she gives to Weiman-Kelman’s questions.

Cowan, a Mayflower descendant, became a stalwart in the New York Jewish community and beyond in the 1970s and ‘80s. She was the first woman Jew by choice to be ordained a rabbi at Hebrew Union College, and she did groundbreaking work with her husband, Paul, on interfaith family issues.

Weiman-Kelman met Cowan in the 1970s when Cowan and Paul lived near her in-laws on the Upper West Side. The Cowans grew close to Weiman-Kelman’s father-in-law, Rabbi Wolfe Kelman, who guided them on their Jewish journeys. Kelman, who served as the executive vice president of the Rabbinical Assembly, supported Rachel’s conversion to Judaism in 1980.

In a recent interview with JewishBoston, Weiman-Kelman observed that Cowan had three distinct lives. “There was her pre-Paul life as the fiery activist, life with Paul and their work together for interfaith families, and that fantastic second act in which she became a rabbi,” she said. “As a rabbi, she was the director of Jewish life at the Nathan Cummings Foundation. She founded the Institute for Jewish Spirituality and wrote a book the year before she was diagnosed [with brain cancer] on wise aging.”

Cowan met Paul in the 1960s when they tutored African American students in Maryland. They went to Mississippi together to register voters and served in the Peace Corps in Ecuador. Upon their return from Central America, Paul began a celebrated career as a reporter for The Village Voice. Cowan built a fulfilling life for her family on the Upper West Side.

Those were the early days of the feminist movement. With a group of like-minded mothers eager to work for social justice causes, Cowan founded The Purple Circle Daycare. Childcare was shared so that the women could pursue their activism. Cowan also put the same care and dedication into establishing The Havurah School, a place where children and parents learned about Judaism.

Remarkably, Weiman-Kelman can document some of Cowan’s milestones with archival video. She presents footage of Rachel at her Quaker childhood camp. The camp’s 30 minutes of mandatory silence in the morning organically connects to Cowan’s lifelong dedication to meditation. 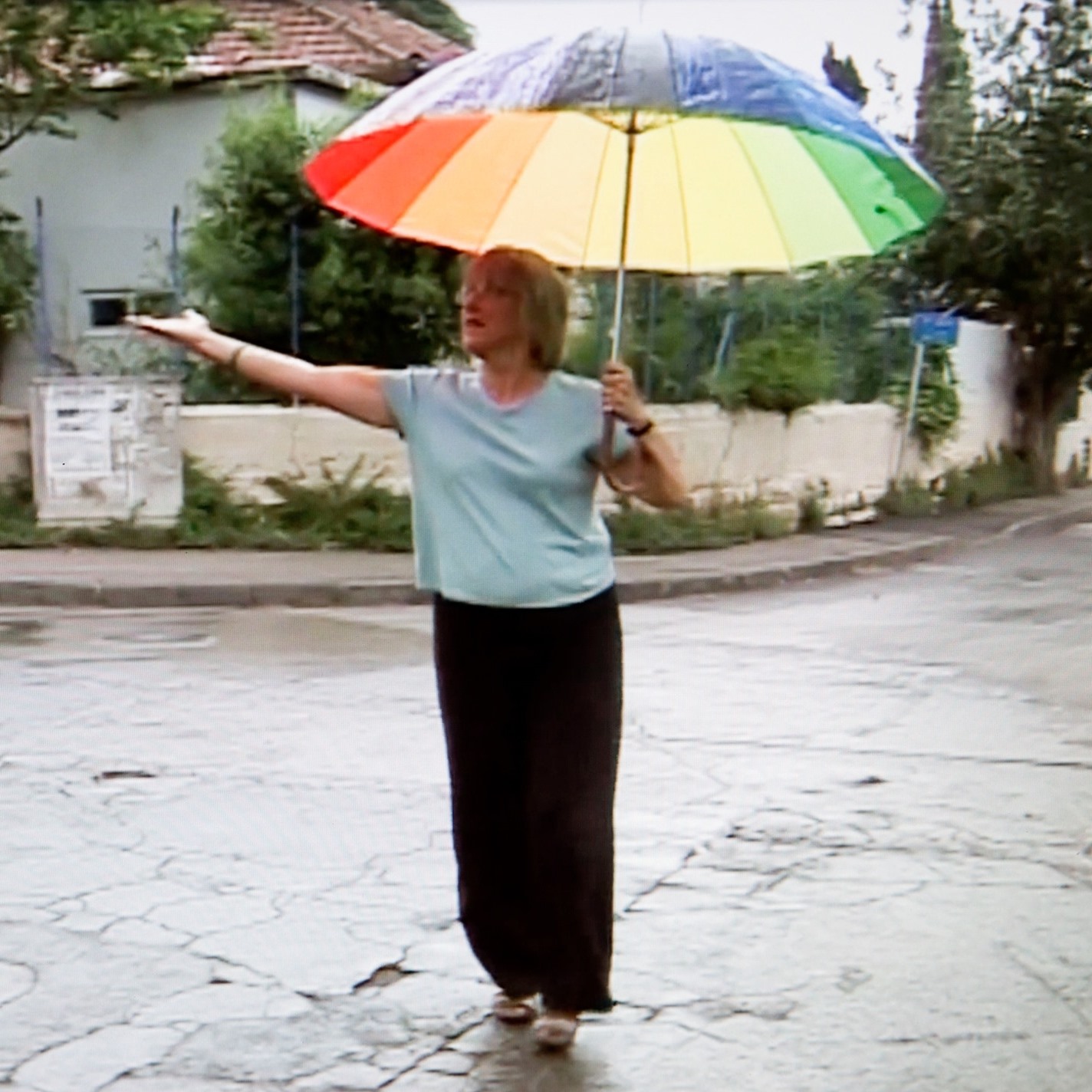 In 1987, Paul was diagnosed with leukemia. Paul’s illness brought God to the foreground for Cowan. In the film, she recalls imploring God to save her husband but then telling herself she didn’t believe in God. She soon realized, “I can’t do this alone. I need help.” He died in 1988—the year of Cowan’s ordination.

Before she made films, Weiman-Kelman worked as a film archivist at the Jerusalem Cinematheque. “I was writing, watching and thinking about films,” she said. “One day I picked up a little camera, a Hi8, and discovered how fun it was to make films. One of the first personal documentaries I made was a birthday video of Rachel’s friends in Israel wishing her a happy birthday.”

Among those friends sending their good wishes was the Israeli feminist and scholar Alice Shalvi. Weiman-Kelman showed the video at a fundraiser in the United States, and Jeane Ungerleider, president of the Dorot Foundation, approached Weiman-Kelman to make a film about Shalvi. Weiman-Kelman filmed Shalvi for over a year in what became “The Annotated Alice,” Weiman-Kelman’s first long-form film. ABC bought the film and showed it as a television special.

In 2004, Weiman-Kelman planned to make a long documentary about Cowan. She intended to present Cowan’s story in tandem with the story of Dhammananda Bhikkhuni, the first female Buddhist monk ordained in Thailand. “Rachel and Dhammananda were grandmothers who ran spiritual retreat centers,” noted Weiman-Kelman. “At the time, American Jewish World Service had invited Rachel to tour Cambodia and Thailand. AJWS brought me along to film. I eventually went to Thailand with Rachel to meet Dhammananda, but then I got involved in other things and didn’t finish the film. As a filmmaker, I often have a lot of pots on different stoves.”

Weiman-Kelman’s next collaboration with Cowan was a decade later. She had planned to meet Rachel in Israel and film her. The trip’s purpose was to introduce Jewish spiritual leaders to Palestinians. That would also become the year Cowan was diagnosed with glioblastoma.

In the 18 months that Cowan lived with the tumor, Weiman-Kelman presents Cowan facing death with grace, fearlessness and, at times, defiance. “I am not a statistic,” Cowan says into the camera. “I am a person.”

Cowan died in 2018, and two weeks later, Weiman-Kelman was diagnosed with lung cancer. She counts herself lucky that the disease was found early. “It was discovered on a fluke when I had an X-ray for a hernia,” she said. “I was biopsied, and a quarter of my lung was removed. I didn’t need further treatment. Throughout that ordeal, I felt Rachel with me the whole time. She was breathing with me.”

Connecting breath to meditation influenced Weiman-Kelman throughout editing. “I wanted the film to be like a meditation,” she said. “I didn’t exactly know how I was going to get there, but I had an innate sense of Rachel’s pacing and breathing. I wanted people to have a sense of Rachel’s spirit, and I think they did. The people who attended the three initial screenings [in March] said they felt as if they had attended a meditation session.”

TRAILER for Dying Doesn't Feel Like What I'm Doing

Here is the trailer for the film on the beloved rabbi and meditation teacher Rachel Cowan.

“Dying Doesn’t Feel Like What I’m Doing” will be screened virtually on Sunday, June 28, followed by a panel discussion. Register here.