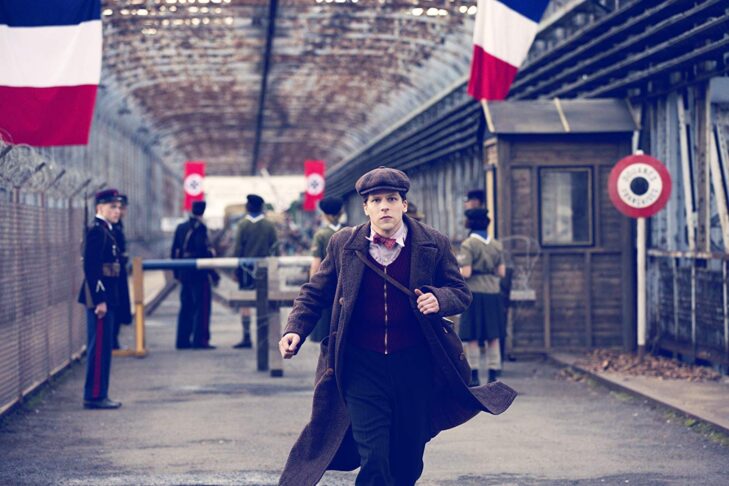 Jesse Eisenberg first lights up the screen in the new film “Resistance” sporting a Charlie Chaplin mustache during a mime routine as Marcel Mangel. The place is Strasbourg, France, just three miles from the German border, and it’s the fraught year of 1938. Mangel will eventually change his last name to Marceau, one that will likely ring a bell for older viewers; Marceau was the most famous mime of the 20th century. The audience of this World War II drama may not know that Marceau was the son of a kosher butcher and pivotal in saving thousands of Jewish war orphans as a member of the French Resistance.

Eisenberg and writer-director Jonathan Jakubowicz came to this history naturally. In a recent online conversation hosted by Boston Jewish Film and moderated by its artistic director, Ariana Cohen-Halberstam, Eisenberg, Jakubowicz and the actors Bella Ramsey, who plays Elspeth, an orphaned Jewish teenage girl, and Matthias Schweighöfer, who plays Klaus Barbie, discussed the film.

“I had more in common [with Marcel] than I expected,” Eisenberg said. “Our families come from the same small area in Poland and lived maybe an hour’s drive away from each other. I grew up as the son of a birthday party clown [Eisenberg’s mother performed at children’s parties], so I was around clowning my whole life. But in terms of the actual process of working on this particular movie, I had an amazing mime teacher who studied with Marceau for years at a school in France. He was also a chronicler of Marceau’s life and gave me this three-pronged education; one of the actual mime routines that he choreographed, the history of mime and Marceau’s history.”

Jakubowicz, who was born in Venezuela and left the country in 2006 in the wake of intense antisemitism, is a third-generation Holocaust survivor. He noted that he thought he “couldn’t make a movie about the war because it was too personal and emotional for me.” He added: “But Marceau’s story was a story about salvation, not extermination. It was a story about an artist who finds his voice and his art by renouncing his ego and putting his art at the service of saving children.”

“Resistance” begins on the harrowing night of Kristallnacht as Elspeth witnesses her parents’ murder at the hands of Nazis. She joins a group of other orphaned Jewish children who relocate to Strasbourg and then Lyon as part of the rescue efforts of a Jewish Boy Scouts and Girl Scouts organization. The nascent French Resistance arranges the secret operation. Marceau’s brother, Alain, is one of the leaders. At first, Marcel resists his brother’s recruitment efforts. His heart and soul are telling him to make art, and he bluntly states that he doesn’t relate to children. 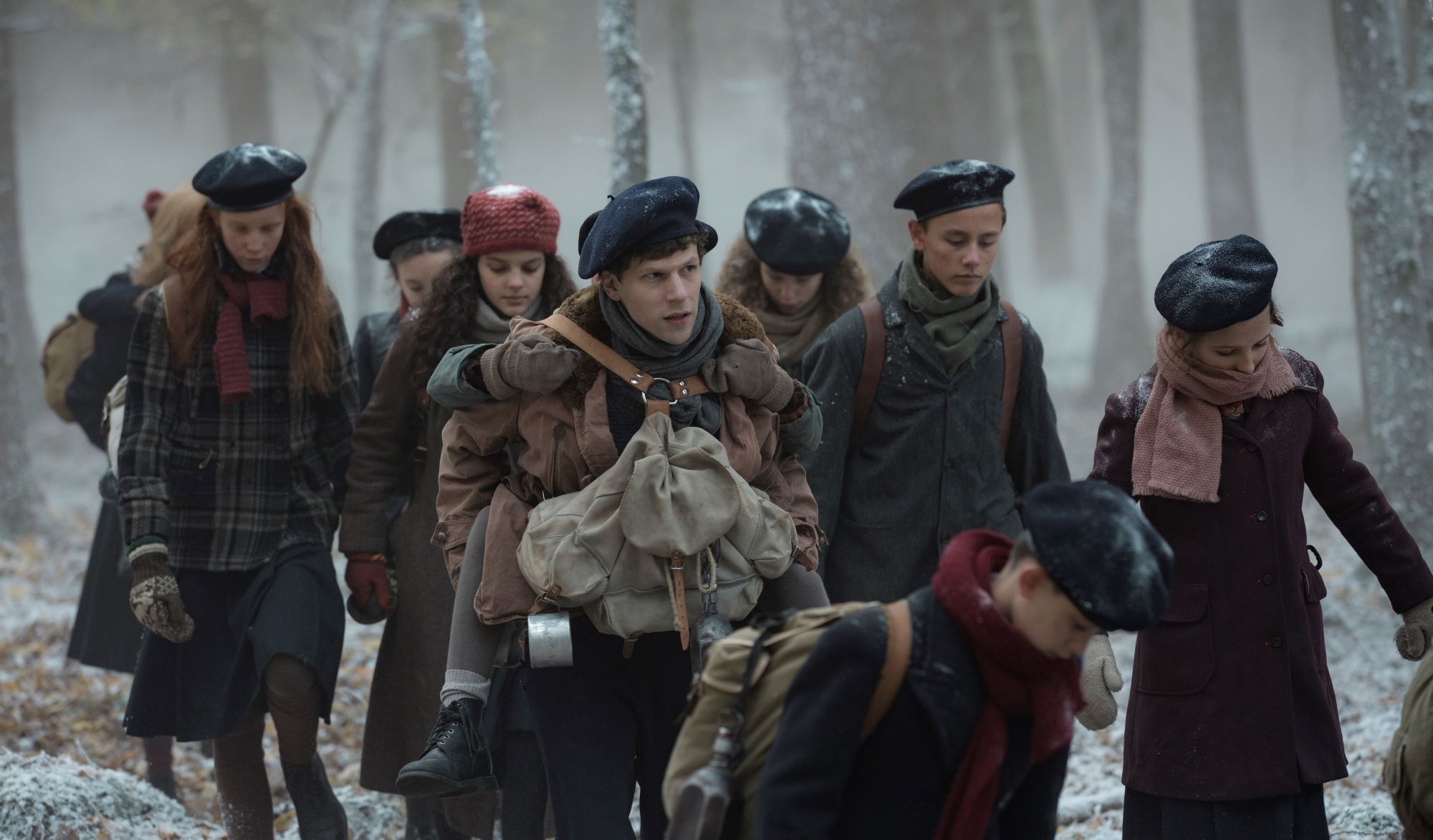 However, Marcel slowly and surely uses his talents as a mime and actor to entertain and distract the children. His playfulness might recall Roberto Benigni’s “Life Is Beautiful,” but the comparison doesn’t hold. Benigni’s representation of the Holocaust is not only maudlin but is essentially scrubbed of its horror. In “Resistance,” Jakubowicz aims for a kind of realism that takes into account the brutality and danger of the time. Marceau, the mime, teaches the children “the art of silence” to survive. That strategy is illustrated in a hold-your-breath scene in which Klaus Barbie and his contingent of officers board a train carrying Marceau and his charges to the Swiss border.

Barbie was known as the “Butcher of Lyon,” and the film unequivocally conveys that description. Jakubowicz shows Barbie blithely ordering the execution of Jews while he plays classical piano. He guns down members of the French Resistance in an empty swimming pool of an abandoned hotel in Lyon. During one of those executions, Barbie spares two sisters and takes them into custody, only to flay one of the women alive after she refuses to give up her fellow resistance fighters. Jakubowicz said the harrowing scene was filmed in one take and left the actors spent for the rest of the day.

As for Barbie’s encounter with Marceau on the train, the Nazi is about to arrest Marceau for making fun of Hitler with his paste-on Chaplin mustache. Just inches away from Barbie, Marceau calmly explains that he thinks it’s important to help children laugh in the middle of the war. Barbie then surprisingly asks Marceau for parenting advice. Barbie wants to know how he can engage his baby daughter in learning to play the piano in the future. As Schweighöfer, who delivers an exceptional performance as the brutal Barbie, noted, “[Playing Barbie] feels so unreal, and it feels unreal that these people [existed.] In a time like this, to play these characters is weird, but it’s necessary.”

Added Jakubowicz: “It was important to capture that Barbie thinks of himself as a hero and not a bad person. So, for him, it’s not contradictory to be torturing prisoners and to be worried about his daughter’s future in the arts.” He added that while Barbie and Marceau’s encounter is fictional, Marceau’s advice to just let the girl find her own way in the arts “speaks about this rebel group called the Jewish people. A lot of what [Marceau] is saying is a defiance of everything Barbie represents.”

Jakubowicz frames “Resistance” with Gen. George Patton (played by Ed Harris) speaking to his troops after the allies have won. He invites Marceau on stage to perform what would become the mime’s signature act. At the end of the war, Marceau was a liaison officer for Patton. “The less likely war hero you think of was a mime,” said Jakubowicz, “and the more famous war hero was Gen. Patton. The fact that [Marceau] was introduced by Gen. Patton as a hero and the hero turns out to be a mime, I found extremely unique and telling of what the story really is.”

Marceau died in 2007, and at the time of his death, he was the most famous mime in the world. “Resistance” captures his early years, his talents as a master of silence and his reluctant heroism, while never sanitizing or revising the history of the Nazi genocide.

“Resistance” is currently available for rent on Amazon Prime and other platforms.