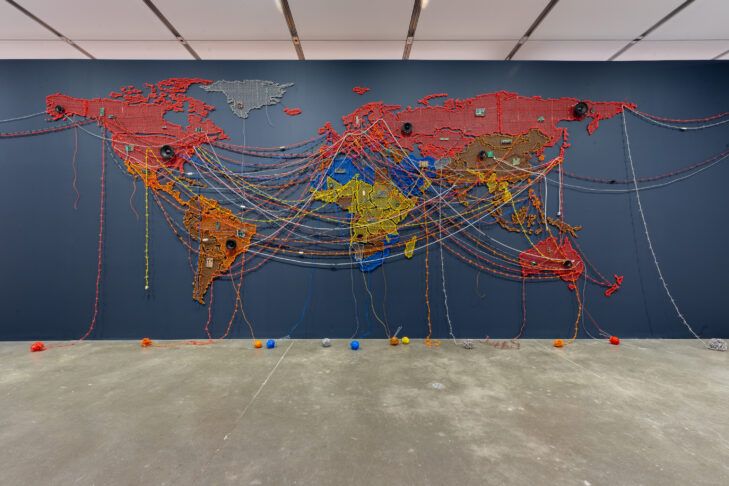 I never related to the image of America as one big melting pot. In my mind, that visual was muddied and messy. It negated the ways in which we live our distinct stories of migration. That feeling was even more evident to me as I recently explored a new show at Boston’s Institute of Contemporary Art (ICA) called “When Home Won’t Let You Stay: Migration through Contemporary Art.”

The show’s name comes from a poem called “Home” by Somali British poet Warsan Shire, the entirety of which is prominently displayed at the entrance. Twenty artists from more than a dozen countries, including Cuba, India, Iraq, Nigeria, the United Kingdom and the United States, interpret the experiences of those who “only leave home/when home won’t let you stay.” The artists present migrants’ stories and histories in sculpture, installation, painting and video.

The show’s co-curators, Ruth Erickson, the ICA’s Mannion family curator, and Eva Respini, the ICA’s Barbara Lee chief curator, noted that the exhibition was intentionally global in its outlook. Answering questions via email for JewishBoston, the curators said the criteria for the show aimed “to give a platform to artists’ perspectives. Artists are not journalists, nor are they historians—they don’t have the burden of bringing forward facts and figures. But we believe artists have an important role to play in our society.” 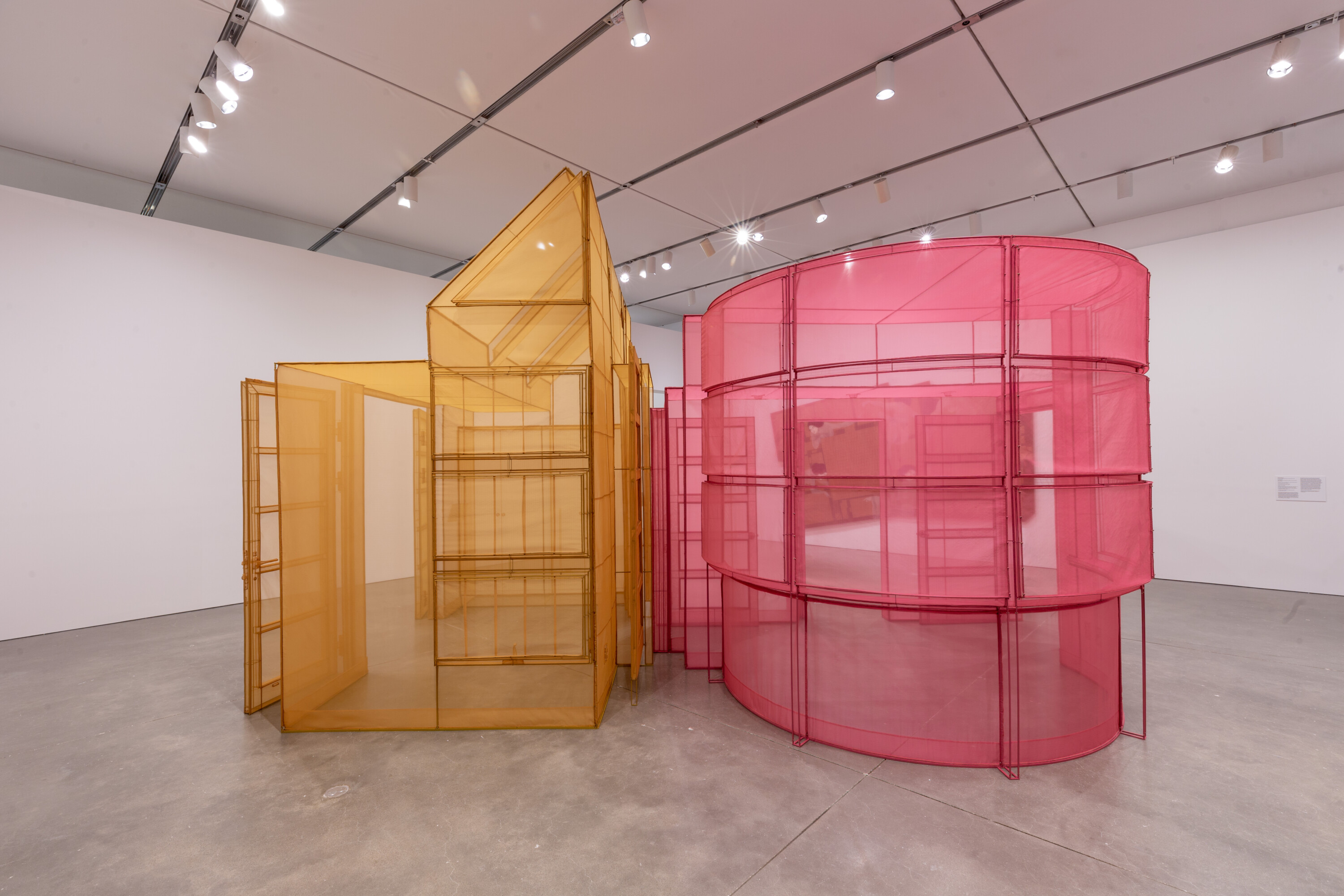 Installation view of “When Home Won’t Let You Stay: Migration through Contemporary Art” at the Institute of Contemporary Art/Boston, 2019. (Photo by Mel Taing © Do Ho Suh)

The works in the show also have things to say about the current displacement of people. The United Nations estimates that one in seven people in the world are international or internal migrants. Some move by choice, others by force. As the first stanza in Shire’s stunning poem declares: “No one leaves home unless/home is the mouth of a shark/you only run for the border/when you see the whole city running as well.”

Visitors to the exhibition initially encounter Reena Saini Kallat’s “Woven Chronicle.” Kallat’s piece uses electrical wires to create a large world map delineating borders and regions. Lands that are geographically far from one another are linked with long strands of the wire woven together. The work calls to mind an elaborate yet childlike tin-can telephone. It’s busy and colorful, reflecting the buzzy conversation around immigration. The show’s curators assert that Kallat’s work “reveals the complexities of these places—their real and particular histories and their imagined or symbolic characteristics.”

Mapmaking can be an inherently political act. It can be responsible for disputes over identity, nationalism and physical boundaries. I was immediately drawn to Kallat’s conception of the Middle East, where Israel blends into the region as just another country. She renders India and Pakistan in a burnt sienna color so the border between them is virtually indistinguishable. Taiwan is notably separate from mainland China, highlighting it as defiant and separate. On the African continent, countries stand together in harmonious color with the exception of the Republic of Namibia, which, like Afghanistan, is gray. In the case of Namibia, which became independent from South Africa in 1990, color-coding is a political and historical act. Installation view of “When Home Won’t Let You Stay: Migration through Contemporary Art” at the Institute of Contemporary Art/Boston, 2019. (Photo by Mel Taing © Richard Misrach and Guillermo Galindo)

As Erickson and Respini point out, an artist’s work “can pose challenging questions, engage us in difficult conversations, move us, provide us with an opportunity to think deeply about ideas and perhaps even shift our assumptions and perspectives in some way.” To that end, a viewer can experience these works as distinct shifts from the personal to the political and vice versa.

One such piece that melds the personal and political is a “transitional sculpture” of the belongings Juan Manuel Montes left behind when he was deported in 2017. The work is suspended in mid-air as if to freeze the moment when Montes was displaced. The questions of what will survive and what Montes will remember loom large.

Kader Attia’s “La Mer Morte”—The Dead Sea—is a sea of blue clothing strewn on the floor. It’s a shipwreck without the bodies. The installation triggered in me a memory of my relatives leaving Cuba during the Mariel Boatlift. A cousin, who had escaped Cuba in the 1960s, rented a boat in the summer of 1980 to bring our family to the United States. They were the lucky ones, arriving in the relative safety of Key West. 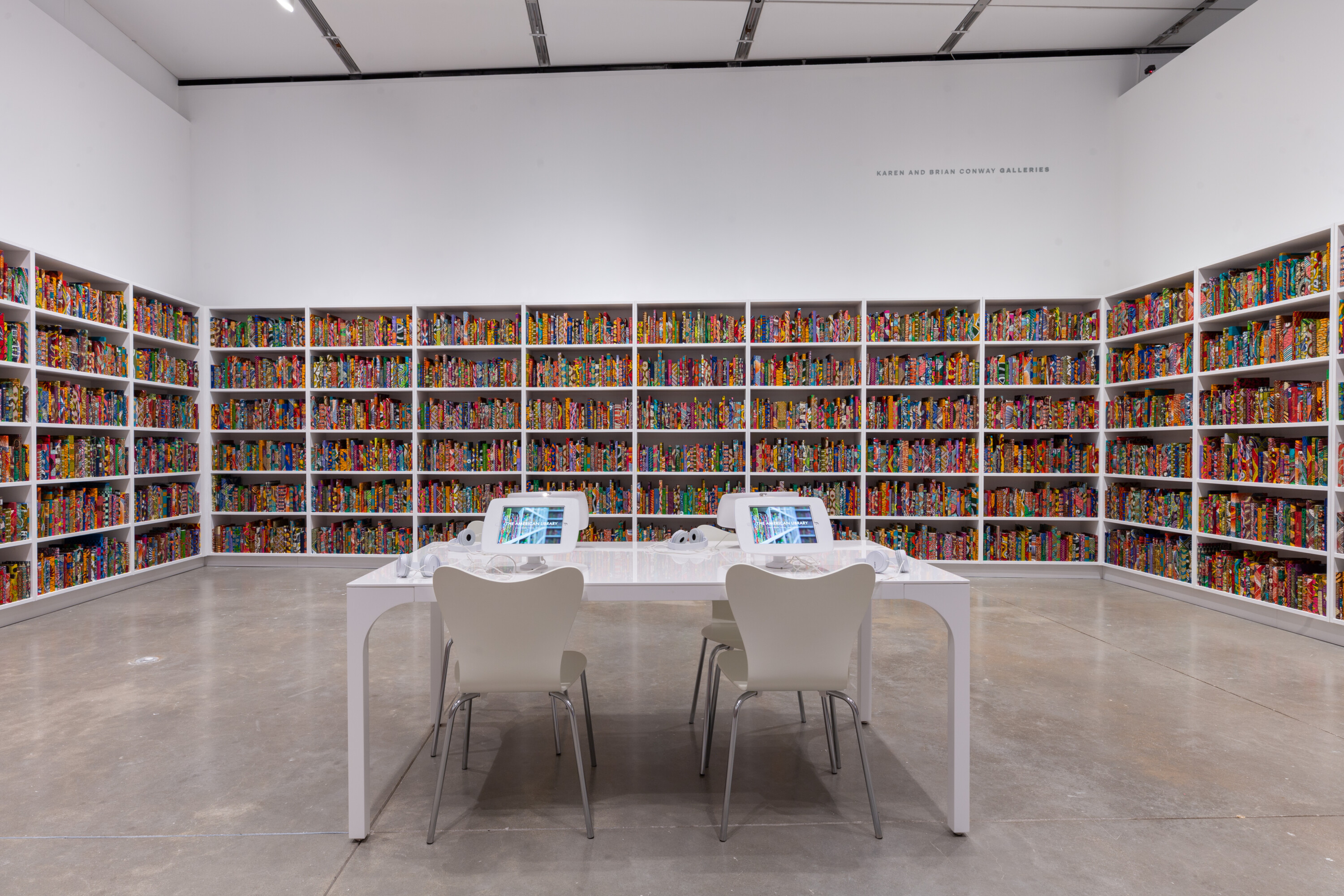 As Shire writes in her poem, “You have to understand/that no one puts their children in a boat/unless the water is safer than the land.” Once in America, my relatives were transferred and detained at an army post in Pennsylvania. My parents made the trek from Connecticut to see them, and to bring them food and clothing and love. Again, my relatives were fortunate. They were released after three weeks, and their young children learned English relatively quickly. The parents soon found jobs. But America was never a melting pot.

As integrated and secure as my relatives might have eventually appeared outwardly in America, losing their home changed their lives forever. Perhaps if there is one word that signifies the immigrant and migrant experience, it is transience. Even if you have not directly experienced a migration, the word resonates. Each visitor to “When Home Won’t Let You Stay” is a witness to the stories of political and ethnic-driven movement occurring across the globe each day—movement these works urgently convey.

“When Home Won’t Let You Stay: Migration through Contemporary Art” is on display at Boston’s Institute of Contemporary Art through Jan. 26, 2020. Find more information here.