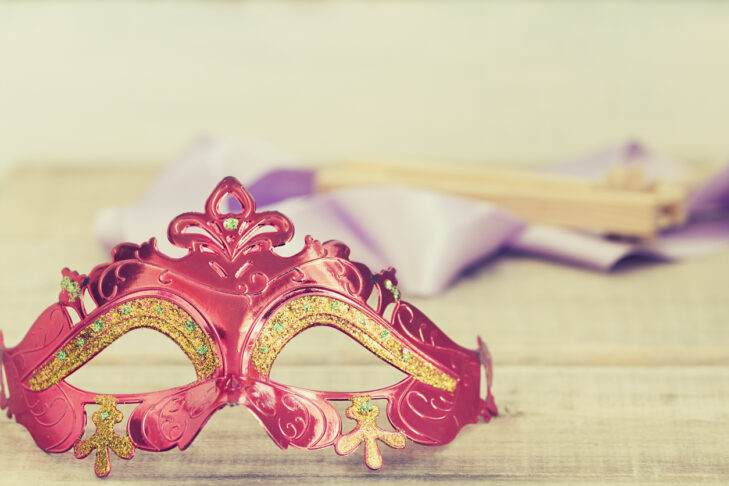 Purim is a great festival: great fear of annihilation, at first, and great joy after the salvation, at last. The celebrations on this festival are exceptionally great, given the commandment to consume alcohol to the point of inability to tell between wicked Haman and righteous Mordechai.

Purim is also a festival of symbolism. The primary message of the festival is that in the face of the purest evil, portrayed by Haman, even the epitome of good, portrayed by Mordechai, is helpless. The only thing that helps against pure evil is unity. When Mordechai pleads with Esther to beg for the king’s mercy, she says that even she, the queen, cannot save them, unless he, Mordechai, gathers all the Jews and they fast and pray for her. Then, when they are united once again, she endeavors and succeeds.

What Are the Costumes on Purim All About?

The costumes are another symbolic custom worth noting. Purim is not a Jewish version of Halloween. The costumes imply concealment of the powers that play out this scenario within each of us.

What Does the King Represent in the Purim Story?

In his book, “Shamati (I Heard),” Rav Yehuda Ashlag, author of the “Sulam (Ladder)” commentary on The Book of Zohar, explains that the king represents God.

What’s the Hidden Meaning of Esther in the Purim Story?

Esther, the Jewish queen, represents a corrected desire to connect with God. This is why she appears after Queen Vashti corrupts her ways and the king divorces her. She is called Esther (Ester in Hebrew), from the Hebrew word Hastarah (concealment), because her Jewish identity is still concealed.

What’s the Meaning of the Scroll and the Miracle in the Purim Story?

Esther’s Jewish identity becomes revealed only when she must act in order to save the Jews, hence the word Megilah (scroll/book), from the Hebrew word Gilui (revealing). This is why the plot described in the Book of Esther is considered a “concealed miracle,” to denote a miracle of the revelation of God’s power in a hidden way.

What’s the Deeper Meaning Behind Mordechai and Haman in the Purim Story?

Mordechai represents the quality of mercy. He is pure kindness and wants nothing for himself. When two servants plot to assassinate the king, and Mordechai warns him through Esther, the king does not reward Mordechai, nor does Mordechai request reward or even recognition for it.

Another important element that is concealed in the story is that God’s plan is to establish the quality of mercy, Mordechai, as the ruler of the kingdom (world). Clearly, if the world is governed by mercy, portrayed by Mordechai, people will be much happier than if they are governed by wickedness, which Haman portrays. But Mordechai has no desire to govern since he wants nothing for himself. He is quite content with anonymity.

To compel Mordechai to act so as to finally become the ruler, the king must introduce a threat big enough to prod Mordechai into action, a threat of destruction not just of Mordechai, but of his entire people. This threat is Haman, who represents the opposite of mercy—a ruthless desire to consume and to own, and to indulge oneself without any thought of others. In short, Haman is pure egoism.

Here’s the Bottom Line of the Purim Story

Haman’s argument in favor of killing the Jews is that they are not united: “There is a certain people, scattered and dispersed.” The Jews became a nation when they pledged to be united “as one man with one heart.” Haman argues that they do not “keep the king’s laws,” which makes perfect sense considering that the law by which they were established is that they will unite. If they are dispersed, they are not keeping it. In such a state they are redundant, so Haman tells the king he should get rid of them.

The Jews are terrified. They have no idea how to save themselves, nor do they realize what they have done wrong to deserve death. Then Mordechai comes and gathers them in prayer for Esther’s success in her litany, and they follow him. By doing so, they reunite and become a nation once again, just as when they became a nation at the foot of Mount Sinai. This makes Haman’s argument invalid, since they are no longer scattered, and are no longer breaking the king’s law. Naturally, at that point the verdict is revoked.

The characters in this play tell us about hidden forces that act within us as individuals, and in between us as people. These forces are ever present, and sustain our spiritual development. As they created Haman in those days, they are creating new Hamans all the time. Today there are quite a few of them in every country, and as then, so now, the antidote is unity.

So, the bottom line of the Purim story is: If we unite, we are saved. If we forget it, we are threatened, and even destroyed.

Why Is It Customary to Get (Very) Drunk on Purim?

This brings us to the great joy of Purim, where we are commanded to drink until we cannot tell right from wrong. The thing is that when we unite, we spread that unity throughout the kingdom, meaning the whole of creation. By doing so, we become “a light for the nations,” spreading the light of unity. When all the people are united, there is no need to be vigil or doubt one another since all the people are as one. In that state, even distinguishing between Haman and Mordechai becomes redundant, and the intoxication symbolizes it.

What Are “Haman’s Pockets” All About?

The hamantaschen (Yiddish for “Haman’s pockets”) represent the correction of the egoistic desires of Haman once all the people have united. This is why they are filled with sweet fillings, to symbolize the joy of unity in non-self desires. This is also why we offer gifts to one another and to the poor, a token of our enhanced connection.

To conclude, Purim is a festival that teaches us that all our woes come to us for lack of unity. Without it, we are persecuted, as during the exile in Babylon, during all the persecutions we have experienced throughout history, and as we are beginning to feel today. But with unity, we are safe and sound, and tipsy. So when nothing goes right, unite!