There are certain epic stories in the Jewish tradition that are so vividly dramatic that they have burrowed themselves into the consciousness of artists throughout history, sunk in their narrative teeth and refused to let go. Our last installment of this series examined the iconic showdown of David vs. Goliath. Now, I present to you a parallel saga, also a massive crowd-pleaser chock-full of graphic violence, except this time our sword-wielding Jewish legend is *gasp* A WOMAN. That’s right, Hanukkah is around the corner, so it’s time to revel in the story of Judith vs. Holofernes.

Judith’s tale may have nothing to do with Hanukkah, but it has everything to do with killing oppressors, so it’s thematically appropriate and customary to read her tale on the Shabbat of Hanukkah. Let’s set the stage: Judith is a widow, and her Judean city, Bethulia, is being besieged by an Assyrian army led by General Holofernes. Things are getting grim, and everyone in the city is about to starve to death. However, our heroine possesses the unstoppable trifecta of intelligence, bravery and extreme hotness. She glams up, puts on her Savage X Fenty lingerie and goes over to the enemy camp with only her maid for backup. Pretending she’s decided to flip on the Judeans, she seduces Holofernes.

Judith not only brings him wine and snacks, but she is a snack. She’s serving cheese and looks. He’s thirsty because the cheese was salty, but also thirstaaaay for Judith. OK, fine! I’ll stop. You get the point. Holofernes also, er, got the point in a more literal sense because he chugs the wine, passes out in bed and Judith immediately slices his head off with his own sword. She puts the bloody trophy into her maid’s basket, and they GTFO of the enemy camp with alacrity. The sight of Holofernes’s headless body freaks out his army so much they promptly NOPE the hell away from Bethulia. Our gorgeous and victorious heroine brings the head home for some delightfully grisly show and tell. Now this is a satisfying story. Are you not entertained?!

“Judith Beheading Holofernes” was a favorite subject among artists. Who can resist the vivid imagery it offers? Some of the best paintings of all time depict Judith sawing Holofernes’s head off. That’s not my opinion; it’s a known fact, so don’t @ me. Just look at iconic 17th-century female painter Artemisia Gentileschi, who created multiple paintings of the story—including this absolute masterpiece in which she portrayed herself as Judith and gave Holofernes the face of her own real-life rapist. If you do not FEEL any FEELINGS seeing Judith/Artemisia righteously avenge herself by holding down Holofernes and forcing the sword through his neck, you may wish to consult a therapist about your inability to authentically connect with your emotions. My own personal favorite painting is Caravaggio’s sublime take on the story. But I digress, dear reader. We aren’t here to talk about all the excellent visual representations of Judith and Holofernes—we’re here to mock the silly ones.

Here are eight artist representations of the story of Judith and Holofernes. Please note that these images have been selected for composition, technical execution (lol) and comedic value. I love absolutely everything about this, beginning with how bemused Judith looks as she winds up to launch one hell of a sword swing. This Judith plays golf on the weekends—she’s got practice, which explains why her crown hasn’t fallen off. Only a true noob would have that happen. Holofernes snores away in a short-lived, cheese-induced slumber, blissfully unaware of the gusto with which she has seized his ponytail. This Judith has clearly taken the approach of no-holds-barred, close-quarters combat, grabbing Holofernes’s jaw like a handle and using it to rip him off the bed and to feed her sword right through his neck. The physicality of this brutal act is juxtaposed with her serene, satisfied face, and with the grouping of happy lil cherubs descending from heaven to cheer her on. One of them hides in the curtains and makes a “shush!” gesture with his finger, apparently in reaction to Judith’s maid, who used to be a very disgruntled daycare provider and is having flashbacks. Our girl Judith is a multitasker. Yes, she has just beheaded her enemy and is carefully inserting his head into her maid’s basket, but the basket shape has reminded her about Thanksgiving and the deep-fat fryer she’s gonna use to make turkey. Her servant, played here by Enrico Colantoni in a scarf, has seen all those cautionary videos on YouTube about the horrors that can occur when deep-fat turkey fryers explode. She looks at us, the viewers, as if imploring us to locate a fire extinguisher immediately. Oh, GOD, I just remembered—this is a flammable oil painting and we KNOW how long oil can burn, especially around Hanukkah! We’re gonna need a bigger fire extinguisher, and to back very, very far away.

“Judith With Sword Sitting on the Headless Body of Holofernes” (Barthel Beham, 1525) “Judith With Sword Sitting on the Headless Body of Holofernes” by Barthel Beham, 1525 (Public domain via Wikimedia Commons)

Barthel Beham was a German engraver, miniaturist, painter and a man for whom I have several questions, namely: Ahem, WHY would Judith twist Holofernes’s head off by…sitting on him? Is the sword decorative? Is it a metaphor?! Never mind, I actually do not want to know. I’m not here to kink-shame you or whatever, Barthel. You lived too early for the internet but certain subreddits would have LOVED you, you freak.

“Judith With the Head of Holophernes” (Ambrosius Benson, circa 1530) 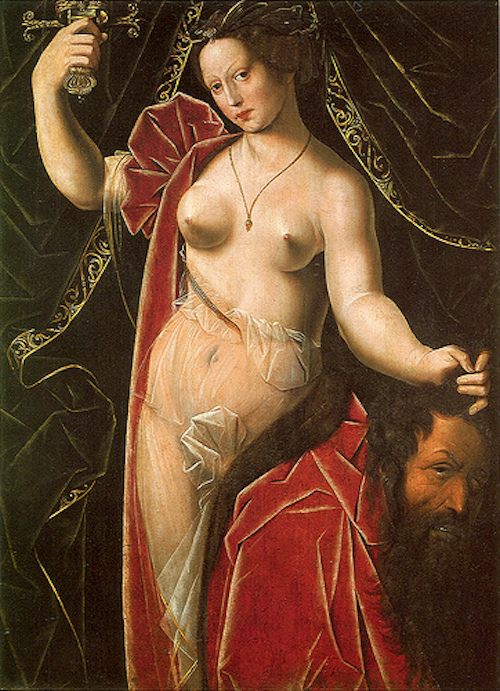 “Judith With the Head of Holophernes” by Ambrosius Benson, circa 1530 (Public domain via Wikimedia Commons)

Earlier, I mentioned the parallels between this story and the story of adversaries David and Goliath. There are myriad paintings of a naked or half-naked David traipsing along with his new favorite accessory, Goliath’s severed head, and there are many similar representations of Judith with the head of Holofernes. There are usually two major differences between depictions of David and depictions of Judith that painters are KEEN to display. I’ll let you guess which two. Seriously, I would have thought that Ambrosius Benson, a painter who was married several times (to women) and had extramarital affairs (also with women) would have had a better, er, grasp of the concept of “breasts.” Clearly, we learn here that having encountered breasts does not necessarily translate into an ability to paint them. Like many manuscript illustrations of this time, we see a story “sequence” told within one image. On the left, Holofernes is propped up in his Patagonia sleeping bag against the side border of the illustration, while Judith gears up to Ned Stark him. Then, on the right, Judith pivots to bring the severed head to the attention of a small, concerned individual who lives at the top of a cuckoo clock. 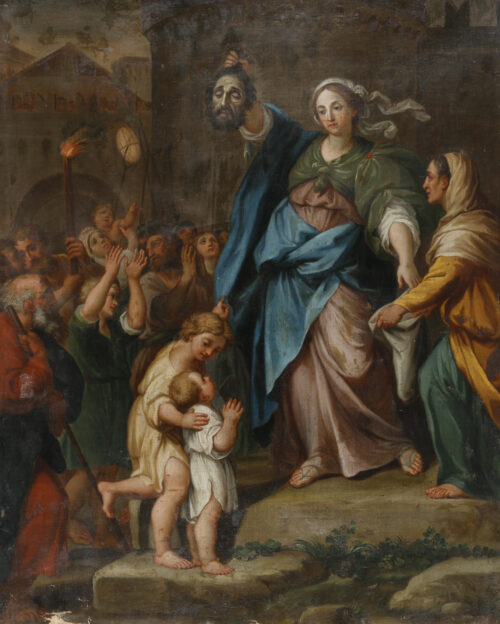 Here we find Judith arriving triumphantly back in her hometown, where she displays the head of Holofernes for all to see, to the vast relief of everyone, including several children. It’s fun for the whole family! This painting presents us with an interesting idea: Hanukkah may have changed over the years from a celebration of violent fundamentalism to a very well-lit celebration of sanitized family-friendly consumerism, but this painting suggests that perhaps there’s a happy medium between these two extremes! According to this painting, kids love severed heads as gifts! Look how excited that foreground toddler is. And, just think—there’s no wrapping paper to recycle or plastic packaging to float forever as part of the Great Pacific Garbage Patch! A severed head is entirely biodegradable. #SaveTheEarth #ClimateChangeIsReal #GoGreen

“Judith With the Head of Holofernes” (Lucas Cranach the Elder, 1530) 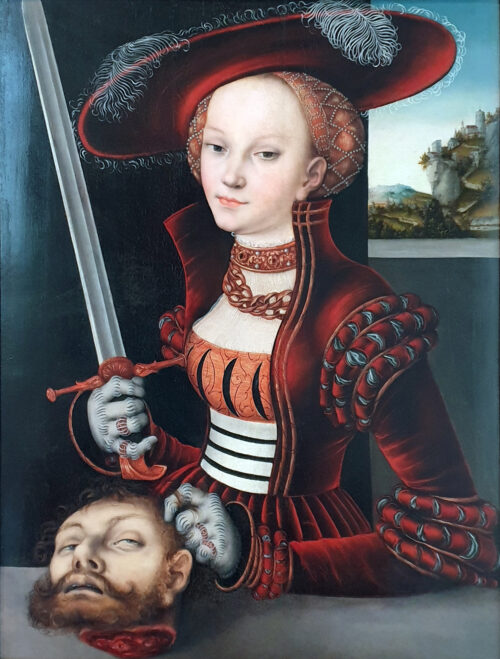 “Judith With the Head of Holofernes” by Lucas Cranach the Elder, 1530 (Public domain via Wikimedia Commons)

Lucas Cranach the Elder was Martin Luther’s BFF, which is in no way relevant but is a fun fact. You know what else is fun? THIS LOOK! The dress, the necklaces, the jeweled hair net, that incredible hat! Judith is dressed to KILL in a contemporary and obviously historically inaccurate costume. The red of the velvet coat goes so well with the bloody neck stump of Holofernes. Her smirk says: “Murder, but make it fashion.” The only thing missing from this fabulous ensemble is a bag, so I interpret this to mean she’s actually using his head as a matching purse. Judith really did “secure the bag” on multiple levels. We cannot help but stan this cute queen of decapitation. Happy Hanukkah!