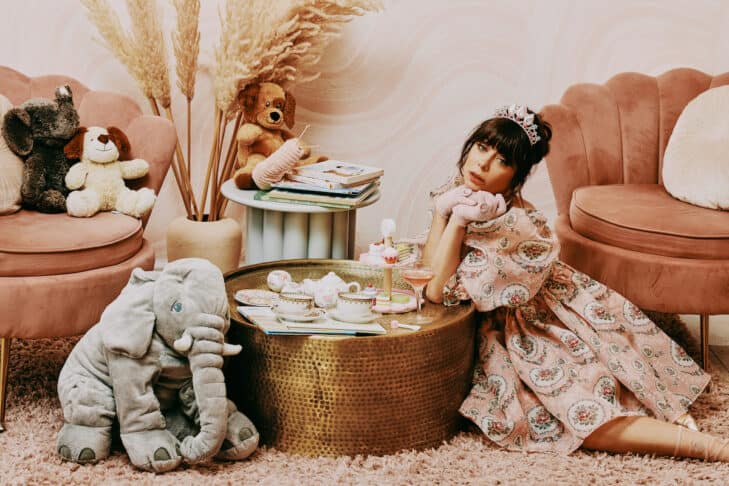 Natasha Leggero recently talked to JewishBoston about her new book, “The World Deserves My Children.” It is a hilarious page-turner covering Leggero freezing her eggs in her late 30’s and her resulting “geriatric pregnancy” at 42—and raising her toddler daughter in a pandemic. Leggero will be performing at Boston’s City Winery on Nov. 19.

A Jew by choice, Leggero is married to fellow comedian Moshe Kasher. She writes about celebrating Shabbat with her husband and daughter in the book. She navigates Christmas—”an Italian family rager”—at her grandmother’s house, which included “45 Italian cousins [and] a drunk uncle would-be Santa and every cousin would take turns sitting on his lap.” And to add to her penultimate answer embedded in the question: Natasha, your love for your mother comes across in this interview.

How did your journey to Judaism begin?

When I met Moshe, I deemed him worthy of fertilizing one of my frozen eggs after we were married. I knew he would prefer that I was Jewish, and we could raise our kid in a Jewish household. He didn’t make me convert, even though I say that as a joke in the book.

Did you take classes?

We went to this class called “Judaism by Choice” and the rabbi who taught it made it extremely easy to convert because he had a different class every night. So, you could complete all 14 three-hour classes and convert in three weeks. Moshe came with me and we did it in two months. I fell in love with Shabbat. I love the idea of spirituality in time—signing off from sundown Friday to sundown Saturday. I can’t say I go to temple during that time, but I shut off my phone and try to unplug.

What is a typical Shabbat for you and your family?

A friend told me her rabbi said, “Do what you don’t normally do and do it on Shabbat.” And that’s been such a gift to our family, especially now with all the stress of the phone and our addiction to it. We have dinner together, bless the wine, the bread and the candles. We then spend time together as a family the next day. Then, if it’s a really great week, we do Havdalah! 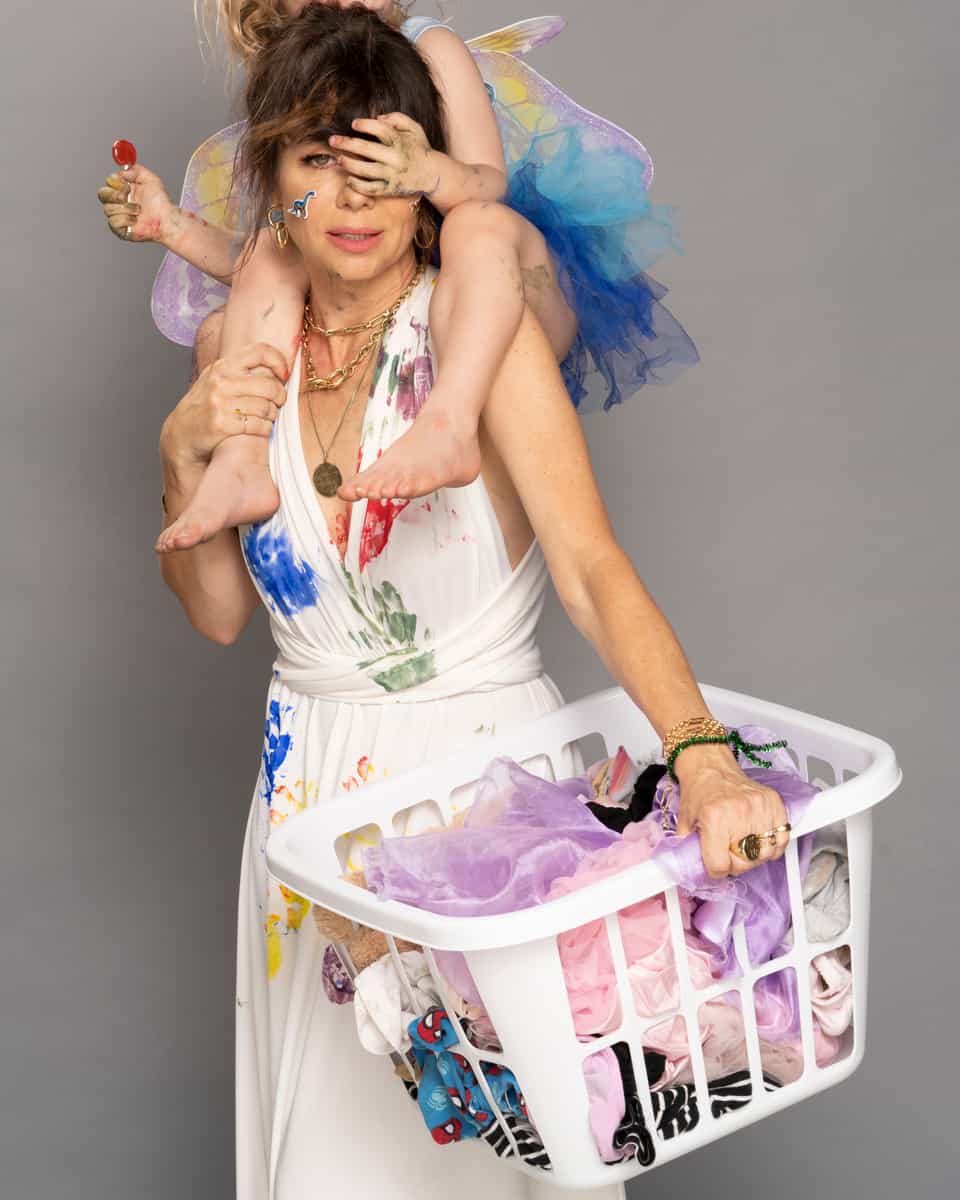 You write that it took some getting used to giving up Christmas. Now that you’re on the other side, what does Christmas look like to you?

The problem was when I said I would give up Christmas, I didn’t have a kid. My daughter is almost five. As I was writing the book and thinking about my childhood, I realized that so much of my tradition and childhood are bound up in my memories around my family. And so much of those memories are about Christmas because that was the only time we were together. My mom worked full-time, so we didn’t have that luxury of time together, but we made room for it on Christmas. Christmas was so much a part of my upbringing; it is a little challenging now that I have a kid. I’m figuring out hacks to have it all.

What sort of hacks?

Moshe does not want a tree in the house. So, I said, what about a Hanukkah bush? He said it was the same thing as a tree. So now I set up a little nature table. I’ll get some pine boughs and stuff because they smell so good. Our table is simple. We collect things from nature that we find on walks and have candles. And then on Christmas Day, we give my family presents. We can still give our relatives and everyone who celebrates Christmas their presents. And, of course, we celebrate Hanukkah, and that’s where I’m landing on it now. I’m hoping in 20 years I get to have a reindeer on the roof of my car.

Do you mean those little horns people put on their cars to make the car look like reindeer?

That’s so funny. Let’s switch gears and talk about your pregnancy. You became pregnant at 42 and were shocked when the doctor described your pregnancy as geriatric.

It’s so rude. Obviously, a man invented the term. Your pregnancy is geriatric when you’re 34—the same age a man is not ready for pet ownership. We need to change that. With egg freezing and all this new technology, it’s important to talk about it in the open so people understand it. I froze my eggs at 38, and that is pretty much the cutoff. My gynecologist told me my uterus was a 10 out of 10 when my eggs were implanted at 42. And I don’t know why doctors act like a geriatric pregnancy is an amber alert.

You were very proactive in freezing your eggs. What made you do it? As you write in the book, you were content with your child-free adulthood.

I discussed it with a therapist, and he told me I was a “situational breeder.” If the situation presents itself, you’ll breed. If not, you’ll be happy to skip it. I felt like that. I have friends who were determined to be moms on their own. A single mom raised me; I knew I didn’t want to do that. I had some extra money and decided to do it on a whim. And then, when I met Moshe, I was so happy I had those eggs. I had eight of them, which was not enough to do two rounds. Then Moshe did his thing on them, created embryos and four embryos worked. Then they did genetic testing, and two died. Then I had a miscarriage. The last one egg was my kid. 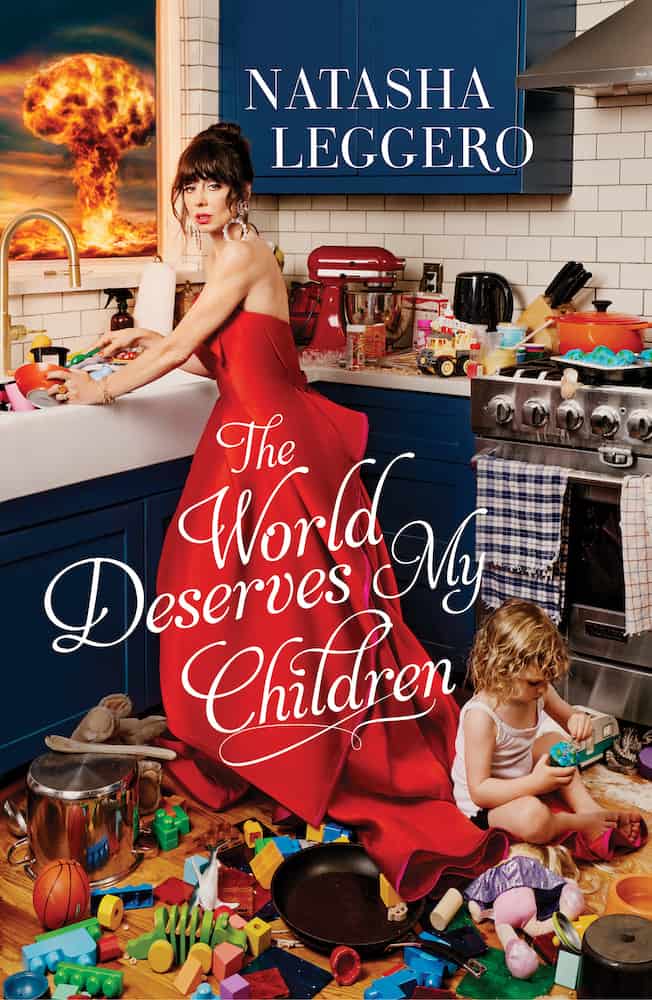 You interview Moshe towards the end of the book. The mom is the CEO and the dad is CFO, the chief fun officer. Please elaborate on those designations!

I interviewed Moshe on a lark because I’d been making fun of him for the entire book. I wanted to give him a chance to redeem himself or tell me what he thinks a mom should be doing or if I’m doing it right. He told me two things I had never thought of. One of them is that my job is to keep my daughter safe at all costs. And his job is how are we going to have fun? I appreciate that he wants to be the person who’s always making it fun. But sometimes that clashes. For example, when she was a baby, we’d go camping. I would move the pack and place it further away from the fire because it’s flammable. Moshe kept moving it closer to the fire again. He said she could barely feel the fire. He wanted her to feel what it was like to be camping. I was afraid her hair could catch on fire, and I’d move it back.

Moshe told me in that interview in the book that if you’re constantly in fear for your child, it’s impossible that she won’t feel your fear. His comment made me try to reframe it because I don’t want her to have undertones of her mother being terrified. Like, that can’t be good for her, right?

Your daughter will be five in February. What sorts of things are you looking forward to? And what are you particularly anxious about as she grows into a bigger kid?

Oh, that’s so sad. I think many people have put this five-year-old mark on things as if they are getting out of the danger zone of falling and tripping and hurting themselves so easily. I’ve wanted to start her on piano classes and she really wants singing classes. A lot of those places start accepting kids at five. I appreciate that my mother signed me up for so many extracurricular activities. She also needed a babysitter. But it helped me find my calling, and I’m thankful for that. I plan to do the same thing for my daughter until she finds something that sticks and that she loves.

Did my love for my mom come across?

Your love and admiration for your mom clearly comes across in the book. You understand how tough it was for her to be a single mother to three young kids.

Natasha Leggero will be performing at Boston’s City Winery on Saturday, Nov. 19, at 2 p.m. Get tickets.