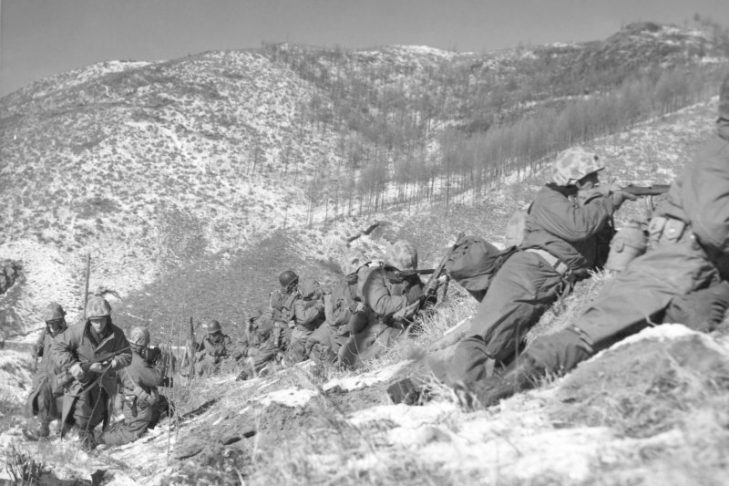 From 1942-1949 my father served in the Marine Corps. He was a radar operator, serving in the South Pacific and, after the war, in China. His service is one of the defining factors of my life. As long as my three brothers and I can remember, he talked about the Corps. And talked and talked. He reminisced about his buddies and often about confronting anti-Semitism. It was important for him to define himself as a tough, although short (5’6”), Jewish Marine. He took on the big guys, he took on the anti-Semites, he took on the Japanese. As the slogan says, “Once a Marine, always a Marine.” As we grew up, my father’s stories became a bit tiresome. I know that sounds immature, perhaps disloyal or disrespectful, but we were kids.

All of my uncles and my parents’ male cousins on both sides of the family served. In fact, Jews accounted for 4.23 percent of Americans who served in World War II at a time when Jews constituted 3.3 percent of the population.

As an adult, I find myself drawn to those who serve in our armed services. I donate to veterans organizations and volunteer for Operation Supply Drop as a staff writer. I have gone up to men and women in uniform and thanked them for their service, feeling self-conscious but believing that it was something I should do. Once in a Dunkin’ Donuts I noticed a group of men and women in army uniforms sitting together socializing. There is an army research center in Natick, so it’s not unusual to see soldiers around town. I bought them a large box of munchkins. Once a Marine’s daughter, always a Marine’s daughter.

My intention here is not to signal my virtue but to give context to a remarkable recent experience.

I was leaving the post office in downtown Natick one morning and noticed that the man in front of me was wearing a Marine Corps T-shirt. He also wore a large crucifix hanging from a chain around his neck. Despite my somewhat shy nature, I asked him, “Were you a Marine?” “Yes,” he answered and proceeded to talk at length about his experiences in the Korean War.

“I’m a Roman Catholic,” he told me. “You know, I took someone’s life. More than one. One of them could have been a doctor.” He went on to explain how he continued to struggle with his war experience over 60 years later. He concluded, “You know, war is stupid.” I thanked him for his service and we parted ways.

I left feeling that something important had just taken place. He is Catholic, and I am Jewish. Not to get melodramatic, but, in a way, I had heard a confession. I grew up in a Catholic neighborhood in Quincy, surrounded by kids who went to St. Agatha School in Milton. I heard about their weekly trips to confession. I was somewhat jealous of the beautiful white dresses the girls wore to their first holy communion in the second grade. I visited a convent where one of my babysitters was serving as a nun.

Mine was a minimally observant home, so for a long time I knew almost as much about Catholicism as I did about Judaism. As an adult I came into my own as a Jew, studying, practicing and enjoying—so far for 34 years—at the wonderful, welcoming community of Temple Israel of Natick.

And here I was, the daughter of a Marine, in some ways the product of a Catholic environment, a now-practicing Jew, hearing confession. Had I been a priest in the confessional I would have offered absolution (forgiveness), made the sign of the cross and said, “Give thanks to the Lord, for He is good.” The gentleman would have responded, “For His mercy endures forever.” These words are from Psalm 107, representing a tradition shared by Christians and Jews.

I do not want to exaggerate the significance of my experience that day in front of the post office, but I was deeply moved. This man’s history, over which he still agonizes after six decades, resonated with my experience as the daughter of a veteran and as a person of faith. Semper Fi.