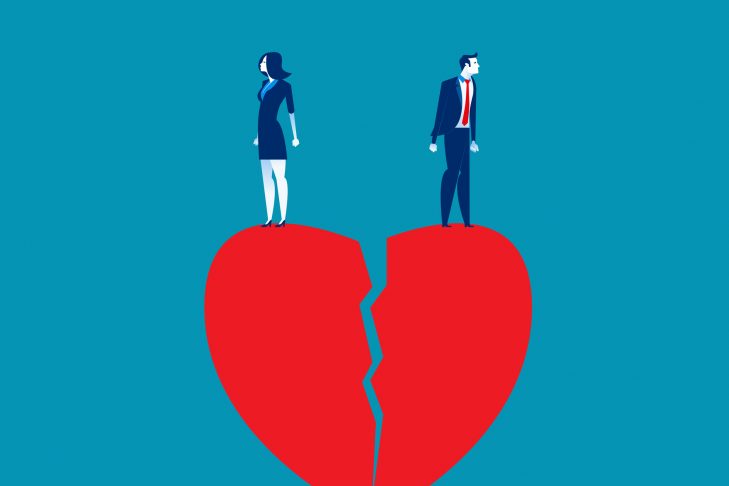 For most of Jewish history, one law has held supreme for divorce: only the man can declare a marriage over. While they’ve developed workarounds, both Conservative and Orthodox Judaism still accept this principle.

And even with the increased flexibility, there remain several hundred Hasidic and modern Orthodox women every year who become agunot, Hebrew for “chained”—as in a woman chained to her husband and stuck in a marriage from which he cannot or will not release her.

“The laws of Jewish marriage and divorce are not egalitarian,” said Lisa Fishbayn Joffe, director of the Hadassah-Brandeis Institute.

Joffe is an expert on women’s rights under Jewish family law. A lawyer and scholar, she is also a co-founder of the Boston Agunah Taskforce. (Agunah is the singular of agunot.)

The Taskforce is devoted to research, education and advocacy for fairness in the Jewish divorce process. “We believe that withholding a Jewish divorce is a form of domestic abuse,” the organization states on its website.

There are typically two components to an American Jewish marriage. First, as required by law, the couple gets married under the auspices of the government in a civil ceremony.

But many Jews also want their union sanctioned by their religion. They participate in a Jewish marriage ceremony, which includes signing a ketubah, or marriage contract.

In this contract, the husband takes the woman to be his wife, “in accordance with the laws of Moses and Israel.” He promises to support and care for her.

In Conservative and Orthodox Judaism, a religious marriage can only be dissolved through proceedings before a rabbinical court. But unlike a civil court, the rabbinical court doesn’t have the power to declare two people divorced. That power is reserved for the husband.

“Under Jewish law, it’s the husband’s actions that created the relationship,” Joffe said. “Only his actions can terminate it. That’s the essence of the problem with Jewish marriage.”

If the husband does agree to divorce, he writes his wife a bill of divorcement, or a “get.”

“Now I do release, discharge, and divorce you [to be] on your own, so that you are permitted and have authority over yourself to go and marry any man you desire,” the text of the get reads. “You are permitted to every man.”

When a woman doesn’t receive a get, it can lead to “get-based extortion,” Joffe said. “Men may withhold a get to obtain a different distribution of marital assets or different child custodial arrangements.”

Here’s how the different strains of Judaism view divorce:

The movement recognizes the primacy of civil divorce laws. If the government grants you a divorce, then you’re automatically considered divorced under Jewish law, too.

Still, many rabbis in the movement recommend congregants seek a get in case they want to re-marry someone who isn’t Reform. The rules governing divorce are also different in Israel (see below), so a get can be important if you later marry an Israeli or move there.

A religious divorce is recommended, but not required.

If the couple does go the religious route, either the man or woman can ask for and obtain a get. However, Conservative or Orthodox Judaism and the state of Israel don’t recognize the validity of a Reconstructionist divorce.

Though the law still requires the man to grant the get, the Conservative movement has developed a set of strategies to keep women from getting stuck as agunot.

The Conservative ketubah includes a clause requiring spouses to follow the advice of the rabbinical court should the marriage fail. The court can require couples to participate in the divorce process or can annul the marriage if either spouse refuses to cooperate.

The various strains of Orthodoxy adhere to the traditional position: Divorce is the man’s prerogative.

In recent years, Modern Orthodox Judaism has devised ways to impose limits on the husband’s power over divorce. Couples can sign prenuptial agreements where the husband agrees that he will deliver a divorce when his wife requests it or will pay her spousal support, set in the contract at $150, for every day he denies the divorce.

This commitment to behave fairly and the monetary consequence “reshapes people’s expectations,” Joffe said. “They go into the marriage thinking they should treat each other in an egalitarian way.”

There is no civil marriage or divorce. Between Jews, marriage and divorce fall under the jurisdiction of government-sanctioned rabbinical courts.

These courts continue to put divorce under the control of the man.

Though it rarely occurs, the government can sanction recalcitrant husbands by freezing their bank accounts, denying them a driver’s license or imprisoning them. Israel also allows women to sue their husbands in civil court for refusing a divorce, though that too happens rarely.

Both Reform and Reconstructionist Judaism recognize same-sex marriage. Divorce is handled the same way as it is for opposite-sex couples.

Looking to avoid the agunah issue entirely, the movement decided that divorces can be granted by either spouse or done mutually, with each spouse delivering a get to the other.

The path toward reform

In the 1990s, the state of New York empowered civil court judges to penalize an uncooperative spouse if he or she refuses to give their partner a religious divorce. Under the law, judges can award the wife a greater share of the marital assets in recognition of the harm she’s suffered.

New York, along with Canada, South Africa and the United Kingdom, have also passed laws requiring a spouse to cooperate in the religious divorce.

Joffe would like to see other states in the U.S. enact similar measures.

Joffe and other advocates are also pushing for greater use of the powers rabbinical courts already have to address get-based extortion. For example, they can annul a marriage on technical grounds like defects in the ring used in the ceremony or in the witnesses who signed the ketubah.

If the use of these technical grounds and more complex legal mechanisms were expanded, it would give the rabbinical courts more opportunities to free women from these marriages.

“This idea that the rabbis’ hands are tied and there are no other options is false,” Joffe said. “Scholars and activists are urging rabbinical authorities to be bold in using these valid approaches to enable women to go on with their lives.”