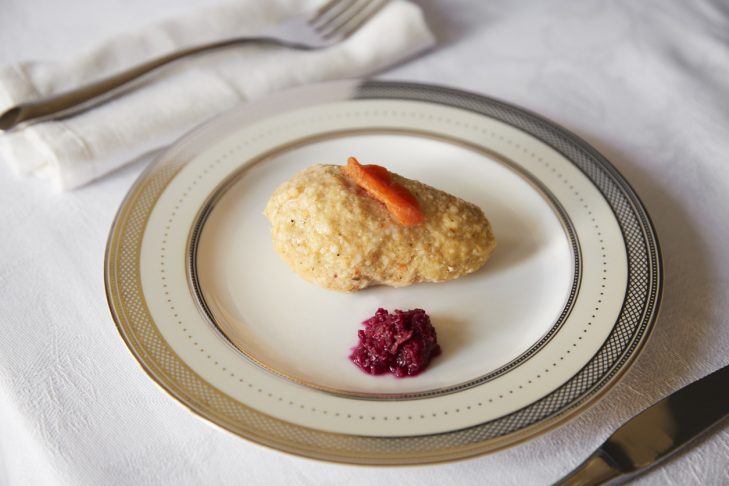 Twice a year my husband and I host the two major Jewish holiday dinner events for family and friends: Rosh Hashanah and Pesach. This year, as I set out on my semi-annual pilgrimage to The Butcherie in Brookline to purchase prepared Ashkenazi Jewish delicacies, I was suddenly faced with an existential dilemma: Did I really need to serve gefilte fish at all on Rosh Hashanah? I immediately consulted with my Jewish holiday muse, my elderly but still “with it” mother, to seek her sage advice: “No, it’s really not necessary. You’ll have plenty of food,” she opined.

Somewhat surprised by her response, I needed a second opinion, so I reached out to a close friend who only reinforced my mother’s view: “I find that many people don’t really care for it anyway,” was her rationale.

So with slight misgivings, I thought that was that. I purchased neither gefilte fish nor horseradish at The Butcherie.

But that was not that.

Later that evening, my husband, my family and I joined my mother for dinner at her senior living dining room. When I casually mentioned that I had decided, upon Nana’s advice, to pass over (pun intended) the gefilte fish at Rosh Hashanah, my 28-year-old daughter immediately registered shock and dismay: “Why would you do that? It’s a tradition!”

Seeing as I was in an environment surrounded by many elderly Jewish women, I decided to conduct an informal survey to gauge their views on this burning question.

When one of my mother’s acquaintances passed by, I quizzed her. First, however, I needed to determine that she was indeed Jewish. That was easy—when asked, she stated emphatically, “Of course,” as though nothing could have been more obvious!

Having established her Jewish bona fides, I made my inquiry. No sooner did the words “gefilte fish” come out of my mouth when she shuddered, exhibiting body language conveying complete and utter disgust. She explained that as a child, she had been traumatized at the fish store when she accompanied her grandmother to buy carp to make the fish. She would have nothing to do with it until this day. However, I explained that whether or not she personally cared for gefilte fish was beside the point. My question was whether gefilte fish is an essential element of Rosh Hashanah. She then stated in no uncertain terms that gefilte fish was indeed a necessity for Rosh Hashanah. Her actual words were as follows: “Is the pope Catholic?”

I then approached a table of four ladies whom I knew to be Jewish. They were sitting with a gentleman resident unknown to me named Bob. This table produced a split decision—a few felt it was not necessary and also didn’t particularly like gefilte fish, but one of the ladies adamantly proclaimed that it was indeed “customary” to include it on Rosh Hashanah. Turns out that poor Bob, who is not Jewish, had never heard of gefilte fish and hadn’t a clue what we were even talking about! It’s kind of hard to describe this “delicacy” to the uninitiated, let alone my gefilte fish “dilemma.”

Truth be told, once my daughter expressed her strong opinion about including gefilte fish, that was all I had to hear. Because there’s no logic here—you just can’t argue with the comfort that comes from long-standing familial and communal traditions.

I myself actually like gefilte fish, though that was not always the case. As a child, I wouldn’t go near it; it just looked so unappealing.

My son-in-law, who was not raised on gefilte fish, shared that he likes it so long as it’s covered with a heavy dose of strong horseradish. The classic red variety (with beets) suits him fine.

I subsequently purchased three jars of gefilte fish made in Israel in the permanent “Passover” section of the Star Market. The store seems to think Passover is synonymous with any major Jewish holiday. Whatever.

I know some of my guests will take a pass, and it really is not necessary given the quantity of food at the meal, but that’s not the point. Gefilte fish is part of the historic chain that connects me to my Jewish grandmothers and now connects my daughter to hers—all those memories being created just by opening a jar.