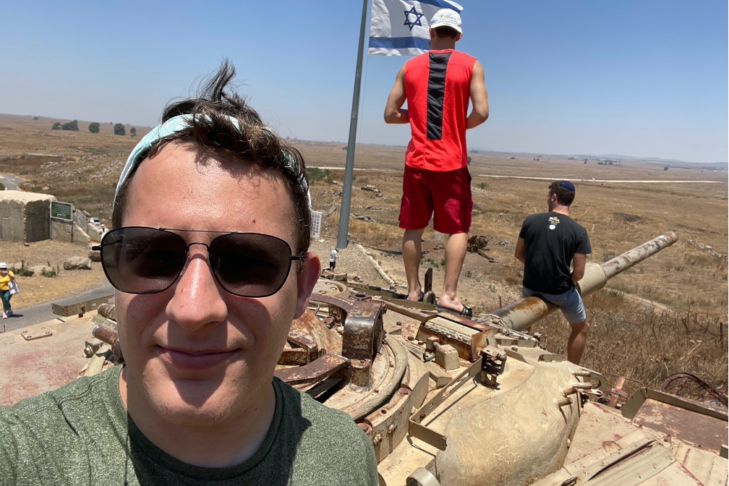 The Boston Jerusalem cohort took a two-day tour of the northern part of the country. We started in Haifa, promoting our connection with our sister city by picking up trash in a community garden. We then bused across the Jezreel valley, ate lunch in the Druze town of Isfiya, with our tour guide Akiva describing the ancient history that took place across the valley. At the top of Mount Gilboa, we looked down into the valley and learned that we were at the spot where King Saul died in battle against the Philistines. We ended the day arriving at our hostel, which was near the city of Tiberias and had a beautiful view of the Sea of Galilee. The next day, we canoed on the Jordan River and then drove up the Golan Heights. There, we learned about the valiant and miraculous defensive stand that the Israeli army made against the Syrian invaders in 1973.

Never miss the best stories and events! Get JewishBoston This Week.
The highlight of the trip for me was our visit to the old Gesher kibbutz. The two main historical components of the kibbutz were the hydroelectric power plant that dated back to the British mandate period, and the bunker in which the residents of the kibbutz sheltered during the War of Independence. The power plant is no longer operational since it was on the Jordanian side of the armistice line, but the people of the kibbutz are clearly proud of their past contribution to the 20th-century economy. During the War of Independence, the Arab Legion under the control of the Jordanian government and the Iraqi army tried to cross the bridge next to the kibbutz and shelled its residents for days on end. The kibbutzniks sent their children to a monastery in Haifa while they fended off the invaders and were ultimately successful, pushing the enemy troops backward and forcing them to try and find a different way into Israeli territory. It is evident that if it were not for the residents of the Gesher kibbutz, the map of Israel might have looked very different than the one we know today.
Avi Gold, American University ’22, is an international studies major interning at Hebrew University of Jerusalem through the Boston Onward Israel program. 125 students from Massachusetts colleges have professional internships in their fields of interest in Tel Aviv, Jerusalem and Haifa this summer. Visit onwardboston.com for more info.