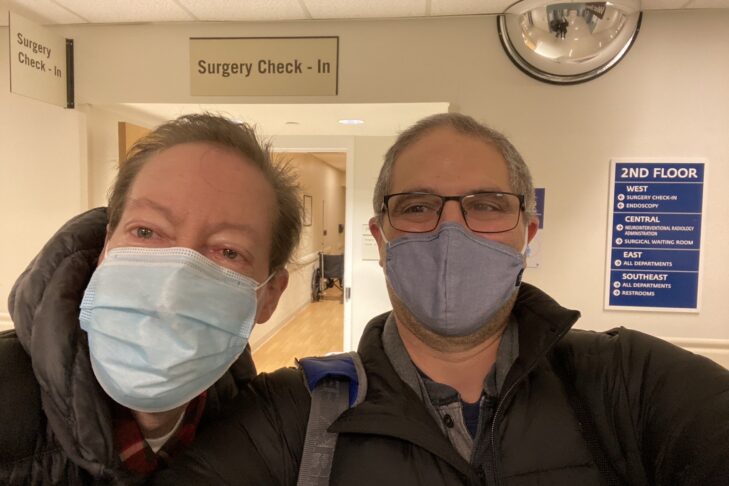 As we begin the Hebrew month of Elul, Jews around the world are preparing for spiritual renewal and rebirth during the upcoming Jewish New Year. For Massachusetts residents Doug Koltenuk and Richard Sugarman, this Rosh Hashanah will also be a time to celebrate friendship, community, and the gift of life.

Koltenuk and Sugarman have been friends since meeting through the Chaverim Club at Temple Israel of Natick approximately 16 years ago. Richard and Halye Sugarman were co-presidents of the group and, like Doug and Ellen Koltenuk, were expectant parents. Ever since, the two families have celebrated Shabbat, holidays, and lifecycle events together.

In August 2019, Koltenuk, 48, was diagnosed with end-stage renal disease (ESRD), where toxins build up in the body and, if they are not removed, the organs will shut down. The only effective treatment for kidney failure is dialysis. While it’s possible to live many years with dialysis treatment, the quality of life may be diminished, with long-term dialysis leading to additional health complications.

A few weeks later, right before Rosh Hashanah, Koltenuk’s medical team at Beth Israel Lahey Hospital & Medical Center in Burlington began dialysis, given his deteriorating health. His physicians also determined that a kidney transplant would provide him with the best long-term solution for a normal life. After they qualified his eligibility, Koltenuk was added to the waiting list of the United Network of Organ Sharing (UNOS), the nonprofit organization that manages the U.S. organ transplant systems. It matches donated organs to recipients based on such factors as compatible blood and tissue types, severity of the individual’s illness, and the ages of the donor and recipient.

“When we first found out that I would definitely need a kidney transplant, there was a lot of uncertainty and we did not know how long it would take us to find a donor,” said 48-year-old Koltenuk, who was diagnosed with chronic kidney disease (CKD) during his first year of graduate school. Previously, as a 17-year-old rising sophomore at Yale University, he had been diagnosed with lupus, an autoimmune disease that frequently results in kidney damage.

The expected wait for a deceased donor kidney was likely at least five years because of the high demand and limited supply, exacerbated by fewer organ donations during the COVID-19 pandemic. The National Foundation for Transplants estimates that 650,000 Americans face end-stage renal disease, with 468,000 Americans on dialysis. In 2020, only 20,000 of the more than 90,000 people waiting for kidney donations across the U.S. received a kidney transplant, reports the U.S. Health Resources & Services Administration.

One way to reduce the lengthy wait time is to receive an organ from a living donor such as a biological relative, spouse, friend, co-worker, or any healthy person who wants to perform the mitzvah of saving a life. In a directed donation, the donor can direct the organ donation to a specific recipient, and the best solution for Koltenuk given his deteriorating health and potential complications of long-term dialysis.

Among the first people the Koltenuks told about hopes to find a kidney donor for Doug were the Sugarmans. Immediately, they volunteered to be tested as potential donors. Ellen Koltenuk quickly set up a Facebook page, “A Kidney for Doug,” which attracted thousands of viewers. Soon “A Kidney for Doug” became a Temple Israel “family affair.” During the synagogue’s fall open house, the Men’s Club, where Doug is a past president, set up a booth to promote awareness for his need for a kidney, distributing informational brochures about kidney disease and organ transplants provided by the National Kidney Foundation and Lahey Medical Center. For months, their synagogue community provided a bedrock of support, from spiritual support to phone calls, meals, and offers of rides for their teenage son.

“It was so touching to feel supported by our friends,” said Ellen. “When you find a community that feels like a family, it feels wonderful. The hesed (loving-kindness) we experienced from our temple family, which was always calling to check up and offering support, meant a lot.”

HIPAA regulations prevent sharing information about potential donors. However, several acquaintances told the Koltenuks that they had been tested. And merely four months after the search began, a match was found.
In December 2019, Richard Sugarman received a call from the Lahey Transplant Center that he was the closest match, subject to a two-day series of medical tests, a psychological evaluation, and interviews. On Jan. 1, 2020, the transplant date was scheduled for March 9, 2020. Ultimately, though, fate intervened. In February, Koltenuk suffered a heart attack and was placed on blood thinners, so the transplant was postponed to October 2020. Two weeks before the date, because of a suspected shoulder infection, the surgery was again postponed.

Meanwhile, Koltenuk’s kidneys continued to deteriorate. Finally, on Dec. 17, 2020, after 15 months of dialysis (three hours a day for three days a week), the transplant surgery finally occurred. Five days later, he was discharged from the hospital, although two weeks later he was readmitted for subsequent shoulder surgery.

In March 2021, he began working remotely from home. In May, as COVID cases began dropping and vaccination numbers increased, he returned to the office several days a week; since early July, he has been back to work full-time. “For me, I have never let my health issues stop me from what I wanted to do in life. Even when I was on dialysis three days a week, I still went to work,” said Koltenuk, a research scientist in the field of radar data analysis who holds a Ph.D. in physics from the University of Pennsylvania.

“It’s merely an inconvenience for the donor, but for the recipient it is life-changing,” said Sugarman, who has become an advocate for kidney donation. After a few days of post-surgical discomfort, he quickly resumed regular activities.

“It’s a beautiful story of someone donating an organ to someone outside of the immediate family,” said Rav Hazzan Ken Richmond of Temple Israel, who provided the family with spiritual support during this entire journey. “One of the first things we learn in Torah is that humans are created in the Divine image. Saving a life is like saving the world.”

In Judaism, pikuah nefesh, or saving a life, is a sacred principle, a supreme Jewish value that takes precedence over nearly every religious act. Importantly, the various denominations of Judaism regard organ donation as an obligation, which does not interfere with Jewish burial rituals or the right to be buried in a Jewish cemetery.

“Organ donation is one of the miracles of modern society that it is even possible,” said Richmond. “It is holy to see how Ellen spearheaded the search for an organ and how Rich stepped up. It says something beautiful about our community.”

Sugarman says that donating a kidney is simply the right thing to do for a friend, and encourages others to perform this mitzvah. “Living organ donation is a wonderful opportunity to help someone else. If you are healthy enough, you can share your kidney with someone else. For the donor, it is not a big deal and the risk is so low and people live incredibly long lives.”

In July, the two friends delivered a joint d’var Torah (words of Torah) during Shabbat services at Temple Israel of Natick. And on Rosh Hashanah, they will mark a year of renewal and rebirth as they recite the Gomel blessing, the Jewish prayer of gratitude recited after a serious illness, surgery, or long journey.

Register online to become an organ donor when applying for or renewing a Massachusetts driver’s license here. To sign up as an organ donor in other states, click here. 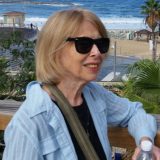