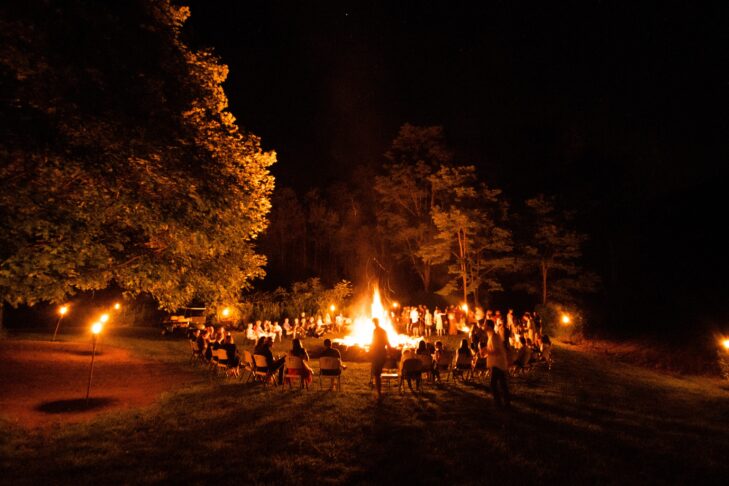 My son is heading off to overnight camp this summer for the very first time. He’s 11 and can barely shower without instructions, so we’ll see how it goes. He’s super excited—as am I—but also a little bit trepidatious. Who will his bunkmates be? Will he like his counselors? Will the food be edible? What if he never emails us? Or, worse, what if he always emails us?

While researching camps, I found tons of information for parents (and wrote some of it!). I didn’t find as much info for kids, until I discovered 12-year-old Eden Martin’s new book, “Notes from the Camp Bunk: A Guide for First-Time Campers from a Camper,” designed for first-time campers ages 7 to 14.

Her mom, a former Bostonian, is also a camp expert, running the East Coast Summer Camps matching service, helping parents wade through the many New England and New York-area camping options. Her family, which is Jewish, says that the East Coast has a stronger sleep-away camp culture than in Los Angeles, which focuses more on day camps.

As such, Martin is a sleep-away camp veteran. Although she lives in LA, she attends Camp Echo Lake in the Adirondacks for seven weeks every summer, which has a vibrant Jewish population. This is her sixth year.

When working on the book, Martin got expert input from “Homesick and Happy: How Time Away from Parents Can Help a Child Grow” author—and prominent Arlington psychologist—Michael Thompson.

“There are books for nervous parents; there wasn’t one for actual campers. So I decided to just write one,” she says. “Michael Thompson gave me lots of advice.” Martin wrote the book during the pandemic and stacked it with plenty of personal advice and experience. She explains why it’s good to go to camp without knowing anyone (which sounds vaguely terrifying, but as she says, “You get a whole fresh start. Nobody will remember the stupid thing you did two years ago. You get a whole other group of friends apart from your school friends.”)

She also walks kids through how to cope with screen-time withdrawal (“you get to focus on being with your friends; you won’t even think about it,” she promises), and she also predicts that homesickness, while very real, is usually only acute during the first week.

Plus, there’s a big benefit to persevering: “At the end of summer, even though it’s really sad when you get home, you get to just be really proud of yourself because you survived however long you went without screen time and without your parents, or not knowing anybody. You get to be really proud of yourself at the end—you were independent for longer than you probably had been before,” she says.

For Martin, camping helped her become more independent and more socially at ease. She tells nervous kids: “Just put yourself out there and don’t wait for [people] to come to you. The sooner you just get to be yourself, the easier it will be to become more close with [people] throughout the summer.”

From a parents’ perspective, her camp-savvy mom, Tracey, urges parents to ask key questions when evaluating camps: What does the camp consider to be its values? Where do they recruit their counselors? Are many counselors former campers? Who staffs the infirmary? How do they handle food allergies? How do they communicate with parents? Are they session-based, wherein kids cycle out through the summer, or do they last all summer long?

Most of all, says Tracey, “I say, ‘It’s not about you: It’s about what your child is going to get out of this, which is independence, self-confidence, lifelong friendships,” she says. She likens it to dropping a child off at kindergarten (with a nocturnal component, of course).

Martin’s book is available now; consider tucking it into your child’s duffel bag before departure.