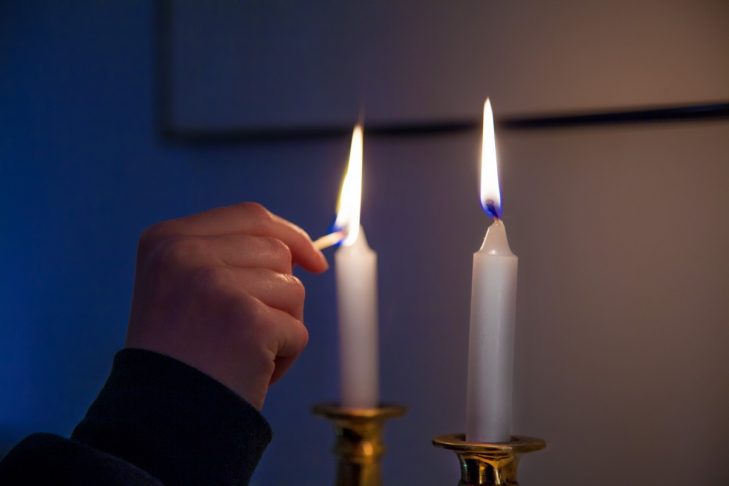 Strike a match, light the candles and chant the Shabbat blessing. Then pause. Be still as the week melts away. Take in the simmering dinner and enter “a sanctuary in time.” Shabbat has begun. OneTable CEO Aliza Kline observed that although the pandemic has changed and challenged perceptions of time, “Jewish wisdom can anchor you in time. We can count all of our days in the Jewish calendar up to Shabbat. Without Shabbat, tracking time can be disconcerting and discombobulating so that you don’t know what day it is.”

Shabbat is a democratic ideal, and the founders of OneTable have beautifully capitalized on Shabbat’s openness to bring the weekly holiday to people in their 20s and 30s. OneTable facilitates the ins and outs of what someone needs to host a home-based Shabbat meal. Until the pandemic hit, the organization supported over 3,000 weekly meals in cities including New York, Chicago, Boston and San Francisco.

But OneTable has adapted to the new realities of COVID-19, presenting an offshoot of its Shabbat programming called PAUSE. Like Shabbat, PAUSE clears space to offer a different conception of time. The program is an innovative collaboration between OneTable and Adam Kantor, an Emmy Award-winning actor who has starred in Broadway productions of “Fiddler on the Roof,” “Rent” and “The Band’s Visit.” JewishBoston recently spoke to Kantor and Kline about the pleasures of PAUSE.

Coming off the success of Passover’s “Saturday Night Seder,” Kantor said the beauty of Shabbat’s rituals and the idea that it reliably returns every Friday night inspired him. “We have this weekly opportunity to mark time and to reflect,” he said. “And I thought, what if we envisioned it as a series so that it’s like Shabbat itself, a ritual that we can continually revisit and use as a catalyst for re-investigation?”

The goal of PAUSE is to be entertaining and joyful, with a given episode segueing into its Shabbat performance at 5 p.m. on Friday. The first program in the series debuted on Oct. 30. Kantor teamed up with choreographer Jesse Kovarsky to present Kovarsky’s reclamation of lighting the Shabbat candles as his ritual.

On Nov. 6, PAUSE will present violinist Kelly Hall-Tompkins and spoken-word artist Daniel J. Watts performing together. Watts’ Broadway experience has included performing in “Hamilton,” and Hall-Tompkins was the violinist in the 2015-16 revival of “Fiddler on the Roof.” “I believe Kelly is the first Black woman to voice the fiddle and play [the] indelible music [of “Fiddler on the Roof”],” noted Kantor.

For November’s PAUSE episode, Hall-Tompkins has identified the themes of the iconic melodies in “Fiddler on the Roof” to compose an original violin solo. Watts’ unique spoken-word piece will be paired with Hall-Tompkins’ music. While Kantor wants the performance to be a surprise, he noted that the piece speaks “about the power of harnessing universal energy, and how that energy will be present when we gather again in-person. It also speaks to the power of theater and religion and the catharsis that gathering can enable. Shabbat is a window into that experience.”

In the age of COVID-19, Kantor explained that Watts and Hall-Tompkins recorded their parts separately. Hall-Tompkins used Watts’ recording to arrange her violin piece. “It feels like a conversation between Daniel’s voice and Kelly’s voice through the violin,” said Kantor.

The details of OneTable-sponsored Shabbats have similarly changed in these pandemic times. To that end, Kline said, her organization paired up with Sacred Design Lab to interview people about what Jewish ritual and Shabbat mean at this moment. The resulting report, “Rhythm, Relationship, Reckoning,” captures the disorientation and loneliness the pandemic has wrought, yet it also taps into a determination to weather this difficult time. “It’s like we have six Tuesdays, and then we have Shabbat,” noted one interviewee.

Noted Kline: “At OneTable we started looking at everything through the lens of rhythm, relationship and reckoning. By far, rhythm became the No. 1 motivator for people to participate in OneTable. There is a particular way that Shabbat resonates for those of us who have a Shabbat practice, but there is also a very universal appeal. The question became giving permission to experience Shabbat in a way that works for someone on a broader scale. How might we incorporate art or storytelling? What’s the ikar—the essence—the heart of the matter? That’s where PAUSE as a name came from, and then this conceptual framework followed.”

OneTable and Sacred Design Lab’s research also exposed that one of the pandemic’s casualties has been the ongoing disappearance of informal relationships. “People who are loosely in our circle can be out of sight, out of mind,” said Kline. “The pandemic has forced people to look within at what really matters to them, particularly in the wake of George Floyd’s murder.”

Kantor and Kline have significant plans for future PAUSE episodes.  Kantor said he is contemplating producing an international version of the song “Sabbath Prayer” from “Fiddler on the Roof.” “I can practically hear people from around the world sing ‘Sabbath Prayer’ in multiple languages,” he said. Other episodes might have more levity, but the overarching goal for PAUSE is to be a “tool for reflection to make the world a better place. Pausing is a major step in getting there.”

Added Kline: “The only certain thing is that Shabbat is coming. I have to assume that this upcoming week will be more tumultuous than the previous week. How might we take time to pause for a moment and imagine the way the world could be amidst all of this? That is the moment when I want to yell from the rafters, ‘Take this gift of Shabbat for you!’”