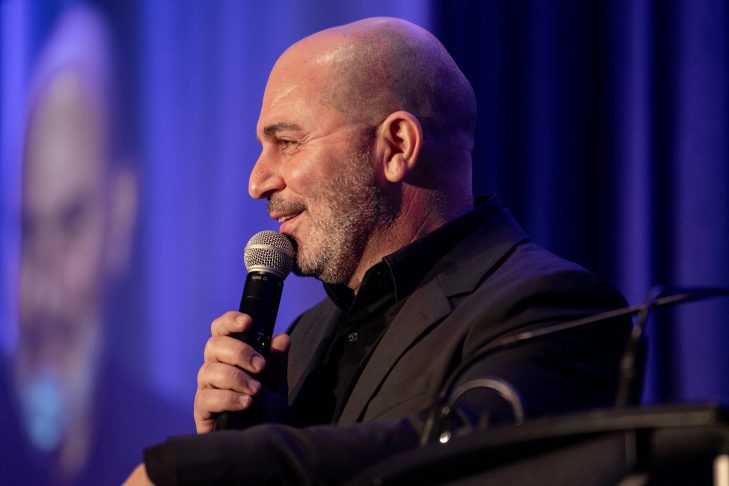 Lior Raz at CJP’s Chai in the Hub (Courtesy CJP)

I rarely leave the house after 7 p.m. Everyone knows that my dog has a very early bedtime. But rules are made to be broken, and this year’s Chai in the Hub made me an offer I couldn’t refuse: hearing keynote speaker Lior Raz, co-creator and star of the phenomenal Israeli thriller “Fauda,” talk about his life, career and the genesis of the Netflix smash hit.

So, I prevailed upon my dog’s godmother to watch her four-legged ward for the evening, unearthed one of the two dresses I own, summoned an Uber to the icy tundra of Natick and ventured forth from my self-imposed social exile to the Royal Sonesta in Cambridge. It was freezing, but it was worth it to learn about the work of the Chai in the Hub honorees, hear CJP president and CEO Rabbi Marc Baker’s uplifting speech about the impact CJP has had through the Boston-Haifa Connection, and to judge for myself how much Lior resembles my colleague and podcast co-host Dan. (A lot. They could be brothers. See exhibit A below.) 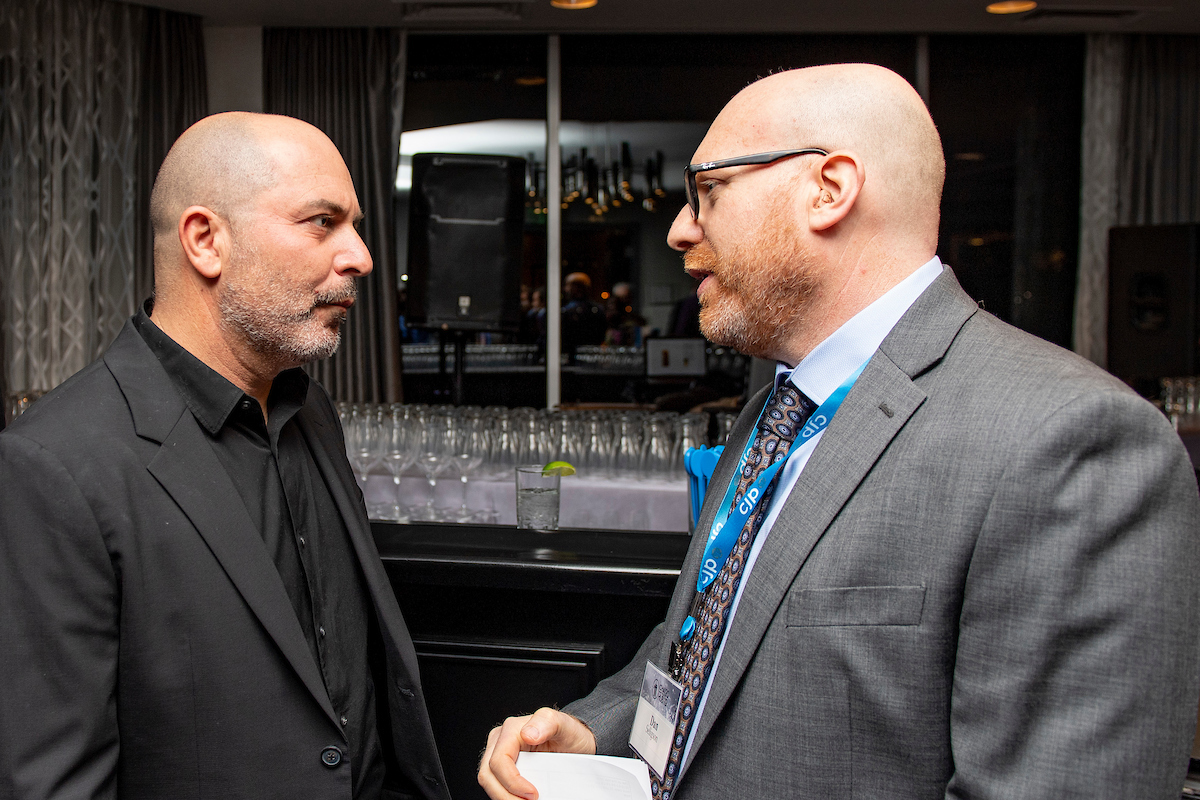 Dan Seligson, right (or is it left?), with Lior Raz, who said, “Two bald guys…we could write a show about that!” (Courtesy CJP)

The event was sold out, with 500 people vying to get their photos taken with Lior and trying to get spoilers about “Fauda” Season 3. As a shortish person, I exist at a perfect height to be accidentally elbowed in the face by other guests, but luckily for me I was attending with my tall glamazon friend Kali, director of JewishBoston, who very ably led me through the crowd. Kali and I immediately set out to have our photo taken with Lior, and then plotzed a little because we were so overwhelmed to meet him. The only way I would have been more excited to meet someone from TV is if next year’s Chai in the Hub guest was Daenerys Targaryen. After some schmoozing and pita noshing, we all gathered to hear from the Chai Society chairs and committee, watch videos about the honorees and listen to Marc Baker before Lior himself spoke. The room was packed with “Fauda” fans, plus a handful of very confused people who had never seen the show and thus clearly need to reevaluate their priorities in life immediately.

Marc shared a powerful letter he had received from Nadia, a Muslim Arab Israeli woman from Haifa, about the work of Parents at the Center. This CJP program focuses on supporting families from at-risk populations, working with parents and their children. In her letter, Nadia called Parents at the Center “lifesaving,” and discussed how it had led her to a powerful friendship with an Ethiopian Israeli Jew. At Parents at the Center, Nadia said she could proudly and comfortably be “myself as a Muslim woman.” This was the community we were trying to nurture, Marc said. “We are creating concentric circles of connection” between Boston and Haifa, between parents and children, between Jews and Arabs, he added. It’s a hopeful and reaffirming message, when often all we as Americans hear about Israel is news of heartbreak and division. 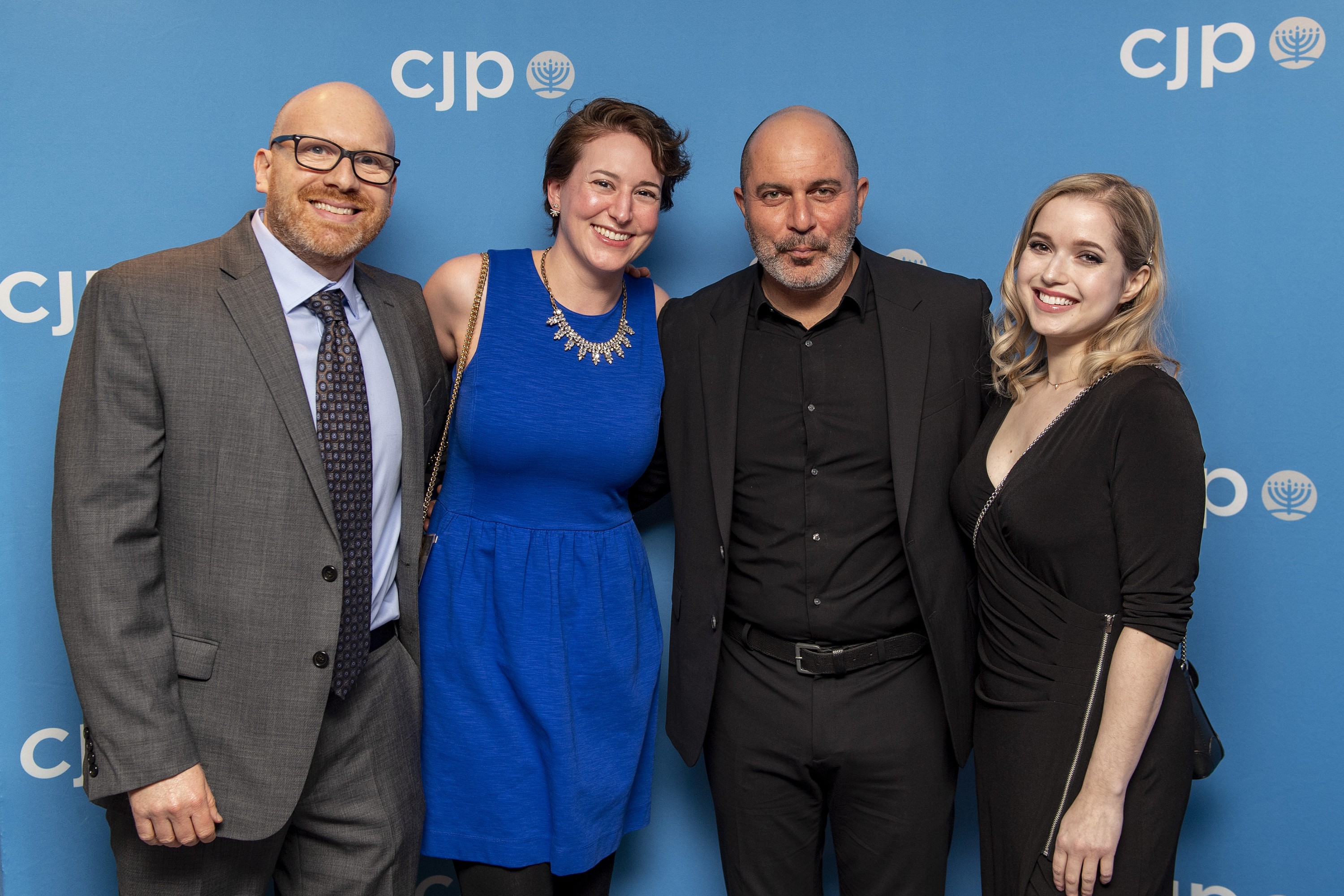 Lior then took the stage to deliver an amazing presentation about his childhood, military service and how he created “Fauda” to give voice to the special forces undercover soldiers who sacrifice so much—family, mental health, their lives—to the service and protection of Israel. His speech was funny, shocking, sad, sarcastic—it was quintessentially Israeli.

Hilariously brash, Lior chastised someone in the audience who had the chutzpah to try and “help” him with his English during his talk (“I’m sorry for my English. I’m an Israeli. I mean, we don’t care. I’m just sorry if you care!”), admonished the few folks who hadn’t seen the show (“If you haven’t seen the show, why did you come? Just to donate?!”), and even gently jested with Marc about their vastly different childhoods (as Lior could disassemble an M-16 and Uzi at age 12 with his eyes closed). He went on to talk about how he only discovered he had PTSD years after getting out of the military—and how many Israelis share his diagnosis. (“Ten years ago, I went to a therapist for the first time because I got married. I was terrified. I wanted to change places so I could have my eyes on the door,” he said.) Struggling with his past trauma, he was asked by his friend, journalist Avi Issacharoff, if he had a dream. He did: “I want to write something about the undercover units. About them, about the price they pay, and their families pay. And I want to talk about the Palestinians; I want to show the Israelis the other side.” 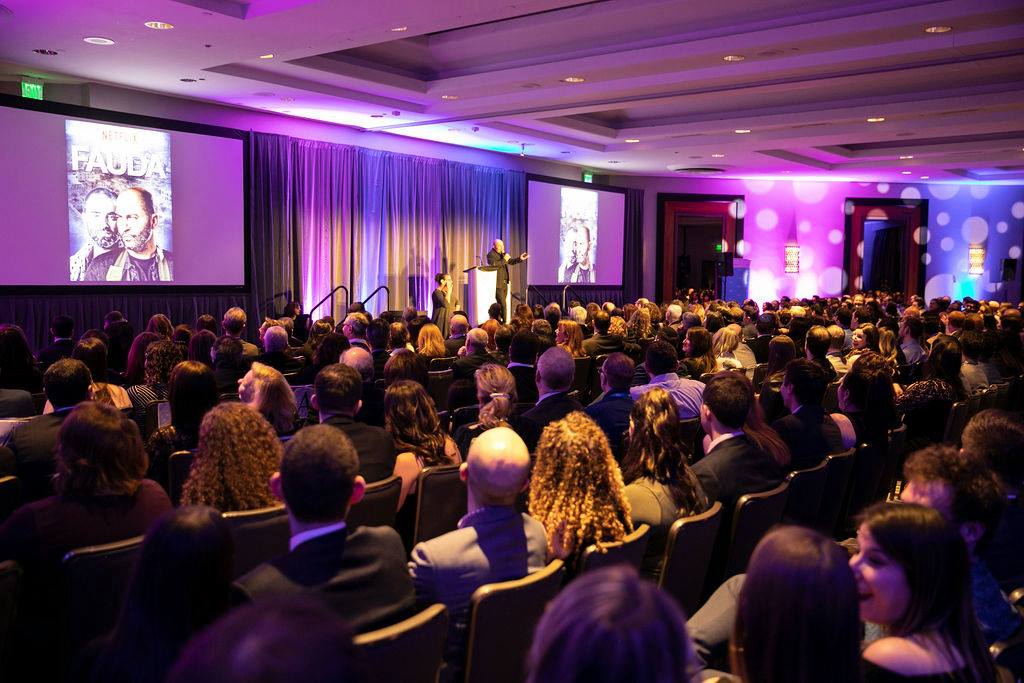 “Fauda” was born from that conversation. Lior pulled from his real-life experiences as a member of a top-secret undercover unit, and Lior and Avi began trying to sell the show to Israeli production company after production company. For various reasons (including the fact that the show is mostly in Arabic), they were rejected until they came to Yes, a television provider that said…yes. Netflix soon followed suit. “‘Fauda,’” Lior said, “is about heroism. I love the miracle and the messiness [of Israel]. It isn’t just a place we visit—it’s people. Our people, our family…they are heroic, and they are flawed. That’s what makes them real and makes them worth loving.”

The impact of “Fauda” shouldn’t be overlooked just because it’s entertainment. (I, for one, never underestimate the power of the golden age of TV!) In Lior’s words, “Fauda” has “changed all the Israelis who have watched the show [and] given them another perspective on how we live in Israel.” It was the first show in Israel with Arabic and Hebrew used as equal languages on screen, which was very important to Lior, who was born to a Mizrahi family. Lior’s father, who had been in the Shin Bet, Israel’s internal security service, always reminded him that they were Arabic Jews. Growing up, Lior learned Arabic to become friends with Arabs who worked at his father’s plant nursery. “This is part of being undercover,” Lior noted. “If you want to be a good undercover soldier, you have to feel you are an Arab and love the language and the culture” in an authentic way, he said.

One of the most tragic real-life events that inspired “Fauda” was the murder of Lior’s first girlfriend, Iris Azoulai, who was killed by a Palestinian terrorist in 1990. The third episode of “Fauda” features the death of a character based on her, and an “In memory of Iris Azoulai” card appears at the end of the episode. “I didn’t talk about Iris for 20 years,” Lior said, “but when we started to write the show, we wrote about her, how her death affected her boyfriend.” Now, thanks to the “Fauda” episode, thousands of people, including myself, have searched online to learn about Iris and her life—people who would never have known her story if “Fauda” hadn’t been created.

The show’s impact has reached far beyond Israel—Netflix has made “Fauda” available in 192 countries all over the world, including places that historically have been vehemently anti-Israel. Lior recounted having visited Abu Dhabi and having fans yell, “Doron is here!” This was unexpected for Lior, as “we wrote the show for Israel, for us, because it came from our hearts.”

At the end of his spellbinding talk, Lior put up a dramatic promotional photo of himself on the show: “For this slide, I don’t have anything to say. It’s just a great picture of me!” A great picture, a great show, a great night at Chai in the Hub 2019!