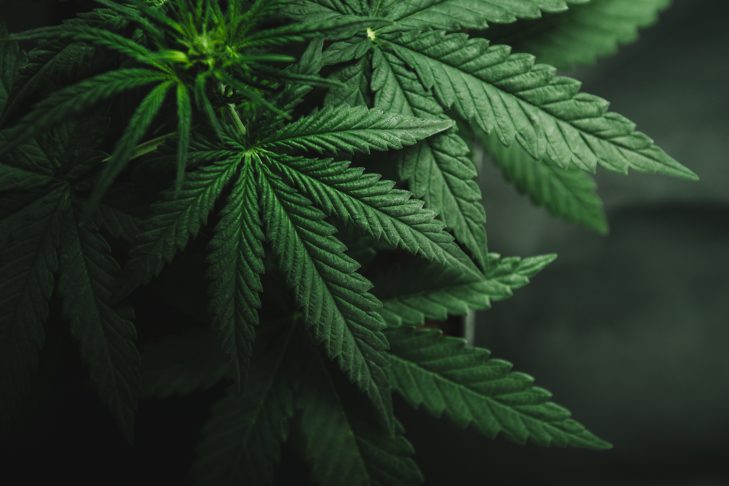 In November 2016, when Massachusetts voters said “amen” to legalizing recreational cannabis, many a Bay State Jew of my acquaintance uttered a delighted “Baruch Hashem!” Medical cannabis dispensaries have been operating here since 2013, and the state is now engaged in the slow bureaucratic shlep of licensing and opening recreational dispensaries. With full legalization underway in the state, now is the perfect moment to investigate Jewish texts and context on this issue, so I reached out to a few Massachusetts rabbis for their takes on tokes.

Apparently, what is old is new again. Jewish tradition stretches back thousands of years, so it shouldn’t be a shock that cannabis uses are discussed in the Tanach, Talmud, Shulchan Aruch and other sources, and that weed has turned into a modern-day economic powerhouse industry for the State of Israel.

In the Torah, a plant called kaneh bosem is referred to as part of the ritual offerings Moses is instructed to give God. According to Rabbi Baruch HaLevi, former rabbi of Congregation Shirat Hayam in Swampscott and co-founder of welaunch, “It is not a stretch to say that kaneh bosem in Shemot and the other mentions in Tanach is what we call cannabis.” Rabbi Yosef Glassman, MD, CEO and CMO of Hadarta, points out that “the Talmud does discuss the growing of fields of cannabis, the Shulchan Aruch, Code of Jewish Law, mentions using cannabis for Shabbat wicks, and many sources talk about cannabis as a staple in Jewish clothing, since it doesn’t absorb spiritual impurity. The Rambam mentions its use as an effective medicine, and it indeed was found to have been used in ancient Israel as an anesthetic, even during childbirth.” The 13th-century Kabbalistic book “Sefer Raziel” offers a very helpful suggestion for warding off demons using a mixture of wormwood and cannabis, which may seem like a waste of good cannabis unless you have to handle an unfortunate dybbuk infestation. In the 16th century, Rabbi ben Solomon ibn Abi Zimra (known as the Radbaz), chief rabbi of Cairo, was firmly pro-weed when he proclaimed that, “Leaves of cannabis make one happy.”

In more recent times, the State of Israel has been at the forefront of cannabis research, with a cannabis industry worth billions of dollars. Notes Rabbi HaLevi: “Israel in general is more entrepreneurial and innovative by culture and design, and it’s no wonder that they have been engaged in medical cannabis R&D for half a century. It began with an entrepreneurial doctor, Raphael Mechoulam, and has been gaining unparalleled steam ever since.” Professor Mechoulam, a scientist at Hebrew University in Jerusalem, was the first to isolate, synthesize and analyze Tetrahydrocannabinol (THC) and Cannabidiol (CBD) in cannabis, now used as treatments for serious health issues like Crohn’s disease, multiple sclerosis and epilepsy in both adults and children.

“We have a moral duty to explore, perfect and provide any plant and every plant if it has medicinal benefits,” says Rabbi HaLevi. “It’s a mitzvah to alleviate suffering, heal and save lives. This is why it’s sanctioned even in the most halachically observant circles, as it is medicine. It’s why Orthodox Jews are heavily represented in the industry, and particularly within the R&D side of the industry.” Indeed, in 2016 the Orthodox Union started giving kosher certification to medical marijuana products, allowing companies like Mitzva Herbal in California to sell hekshered products.

So, if frum leaders are giving both figurative and literal stamps of approval to medical cannabis products, what about using it recreationally? Or, taking it a step further, what about using cannabis in the context of Jewish tradition and ritual?

Keep in mind when thinking about Jewish approaches to recreational cannabis that “there is no such thing as a bad plant,” according to Rabbi HaLevi. “All plants are deemed ‘kosher’ according to the simple reading of the Creation story, period…. Judaism views plants, just like money, just like most every ‘thing,’ as amoral. It isn’t moral. It isn’t immoral. The morality arises from how it’s used, why it’s used, when, where, by whom.” For example, grapes are holy when used for a mitzvah like drinking the four cups of wine on Passover but become unholy if used to a damaging level or imbibed to the point of forming an addiction or potentially harming others. But comparing alcohol and cannabis isn’t really the same, says Rabbi HaLevi, as “grapes have no medicinal capacity, unlike cannabis. Not to mention cannabis isn’t addictive. Cannabis can’t result in overdose.”

Rabbi Dr. Glassman agrees that with the notable exception of Purim shenanigans, “Judaism never endorses ‘recreational intoxication’ since it detracts from the essence of Jewish practice, which is the action of doing a mitzvah. Anything that could cause one to sleep late, forget to say the Shema prayer or read the Torah on Shabbat would surely be vigorously avoided. That said, Jews do drink wine in the context of kiddush, and that wine, in most cases, purposely contains an intoxicant, so there is a basis for a mild intoxication in the setting of ritual—but excess is always discouraged.”

I wondered if folks could possibly find enhancement in their connection to God via weed, like taking a hit before hitbodedut, the practice of unstructured prayer alone in nature. Rabbi Dr. Glassman thinks it really depends on the individual: “In terms of hitbodedut, my initial reaction would be that, while cannabis use could potentially enhance one’s connection with the Infinite Creator for a brief period for some, it’s hard to give this a blanket recommendation, since it may cause paranoia and panic in others.” Rabbi Keith Stern, senior rabbi at Temple Beth Avodah in Newton, feels “no need to somehow justify the use of marijuana on any kinds of traditional grounds. Fact is, if it is legal and it is available, then it can certainly be used recreationally. I would hesitate to suggest using it for any sacred purpose other than the commandment to rest.”

Essentially, if you are going to use legal cannabis, be mindful of your own limits and responsibilities as you would with any other intoxicant or medication. And, if you are considering incorporating cannabis into your Jewish practice, make sure you aren’t breaking any mitzvot, or commandments, to do so. For example, avoid lighting up that joint on Shabbat, since lighting a fire on Shabbat is a big no-no. Wait until Havdalah, like the folks from these Chai Havdalah events. Perhaps for Passover, take a page out of Jewish food maven Joan Nathan’s book and make some delish marijuana matzah balls. (Although if you are Ashkenazi, watch out! Weed is apparently kitniyot. Sephardim and Mizrachim, have fun!) On Sukkot, you could try heeding the Shulchan Aruch’s recommendation and use cannabis as schach, the leafy sukkah roof. You will literally have the dopest sukkah ever, and you will not lack for Yom Tov guests. A friend of mine even swears that using cannabis with her husband has dramatically de-stressed them and improved their sense of shalom bayit, or calm and peace in the home. Certainly, there seems to be a variety of creative and appropriate ways to use cannabis within the paradigm of Jewish traditional life.