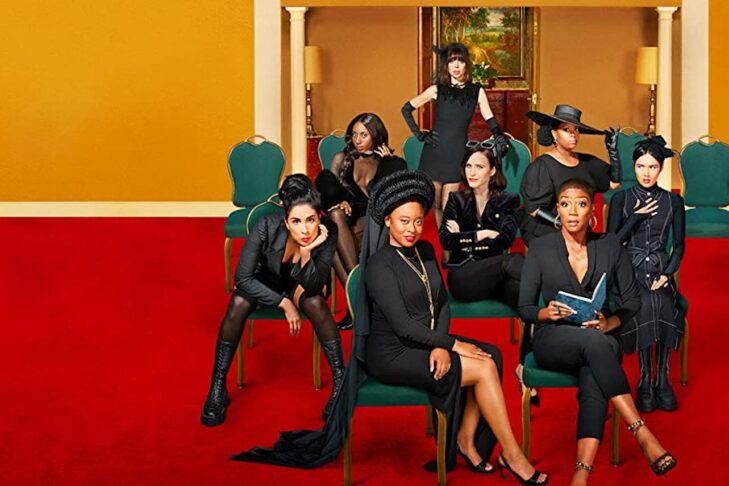 Like 2020 itself, Amazon Prime’s new comedy special, “Yearly Departed,” was better in theory than in execution.

First, there was an all-star, all-female lineup, including Sarah Silverman, Rachel Brosnahan (“The Marvelous Mrs. Maisel“) and executive producer/writer Bess Kalb. Kalb, a longtime writer for “Jimmy Kimmel Live!,” recently published “Nobody Will Tell You This But Me,” a memoir about her sassy Jewish grandmother, Bobby Bell, and their hilarious relationship. Kalb is also known for antagonizing Donald Trump on Twitter. Tiffany Haddish (wearing a Star of David necklace throughout), Natasha Rothwell, Natasha Leggero, Patti Harrison and Ziwe Fumudoh appear, too. So far, so good.

Then there was the ingenious premise: a roast-slash-send-off for the dumpster fire of 2020 featuring stand-up comedy routines masquerading as eulogies, delivered in a funeral parlor. When not performing, the black-clad, veiled, mourning comedians would sniffle, drink and yelp in the audience.

The problem is, roasts are naturally chaotic and loud. People get tipsy. They yell and interrupt. Comedians thrive off that energy. They play off a live audience. And, due to COVID-19 restrictions, there is no live audience here. It appears that each comedian filmed an individual portion and then their reactions were captured separately, which makes for an awkwardly stilted delivery and some cringe-worthy pauses. Haddish, for instance, bids a tearful yet flat farewell to casual sex, something that could have been hilarious with audience participation but instead feels like an ill-conceived comedy interlude at an accounting convention.

Maybe it’s meta; maybe this is just a mirroring of the lonely echo chamber that was 2020. But it can be painful to sit through, sort of like the year itself.

There are cute ideas: Brosnahan, channeling her “Maisel” character, eulogizes pants and then reveals herself to be pants-less. Silverman bids farewell to making America great again and brings some edginess to the dour proceedings: “You promised a wall, and you made one, with strong metal cages with toddlers inside!” And surprise musical guest/organist Christina Aguilera provides a musical finale for an “in memoriam” slideshow, which is the funniest part of the whole affair. Here, we review things that died this year, including vacations, hugs and the name Karen. Really, this three-minute portion could have been the whole show. And the whole show really could have been a series of one-liner tweets.

Much like a virus, stand-up comedy feeds off live humans, not isolation. Such is the cruel lesson of 2020. These talented comics try their best, but the whole enterprise is forced and disconnected, like a Zoom call that lasts uncomfortably long. Such was the year. In mirroring the disconnect and stiltedness we all feel, “Yearly Departed” succeeds. As for the comedy, well, hopefully 2021 allows us to laugh in person again.