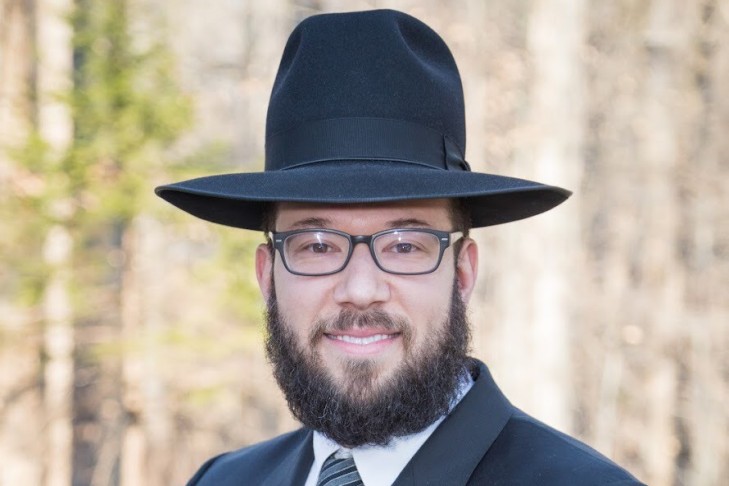 Rabbi Mike Moskowitz uses the parlance of the LGBTQ movement to introduce himself to people. “My name,” he says, “is Mike Moskowitz. My pronouns are he/him. I was assigned secular and came out as Orthodox in high school. For the next 20 years I identified as Orthodox and now present as religiously non-conforming.”

Moskowitz, who dresses in the garb of an ultra-Orthodox man and pronounces Hebrew words with a Yiddish inflection, asserts he is a religious fundamentalist. He believes God gave the Israelites the Torah at Mount Sinai. But what he says next is both surprising and full of grace: “What [the giving of the Torah at Sinai] means for me is that there were conversations at Sinai around trans [issues] and inclusivity between God and Moses.”

Moskowitz is very clear that his work as a rabbi is about creating safe spaces to uncover and discover the Divine. In a recent conversation with JewishBoston, he described himself as a dedicated LGBTQ ally. Since May, he has been the scholar-in-residence for trans and queer studies at Congregation Beit Simchat Torah (CBST)—the largest LGBTQ congregation in the world. “A lot of my work is about deconstructing homophobia and transphobia without changing what the Torah says,” he said. “We need to make space to interpret and act in a way that respects the choice and freedom of the action of an individual.”

Moskowitz discovered Orthodox Judaism as a high school student in Virginia. He joked that his mother signed him up for USY—the Conservative movement’s youth group—to meet Jewish girls. At USY he was exposed to the teachings of “Ethics of Our Fathers” and found it gave him meaning and purpose. His observance quickly evolved into an Orthodox practice of Judaism. Over the next two decades he was on a right-wing trajectory that culminated in no less than three ordinations from an ultra-Orthodox yeshiva in Jerusalem.

In New York, Moskowitz’s career led him to Columbia University’s Hillel and to the Old Broadway Synagogue. At Columbia, he interacted for the first time with trans Jews, and it was a holy experience for him. During that time someone in his family, who had transitioned from female to male, further influenced his outlook. His synagogue in Harlem became the first trans-friendly traditional synagogue. He noted that much of his work at that time “was trying to separate that if God is not a misogynist and the tradition is authentic, what would it look like to get back to that original space at the intersection of innovation and tradition.”

Moskowitz admitted that such an intersection can be a tension-filled space. “Trying to figure out what that space looks like is most of my work,” he noted. “If religion is meant to be a relationship with God—and Judaism provides those details—there is very little holiness in that relationship if we don’t create a safe space for people to be themselves.”

Initially, Moskowitz was quiet about his LGBTQ advocacy. He worked for Keshet under a pseudonym. But two years ago he came out publicly as an ally during a speech he delivered on Hanukkah at the Old Broadway Synagogue. “That coming out speech was one of the holiest moments of my life,” he recalled. “I felt the clarity of what God wanted for me in the moment. I was being asked to partner with God to create sacred space.” Among the things he advocated for in that speech was lighting up the darkness of the closet. He asserted:

“As a rabbi I want to help empower people to take ownership and responsibility for their unique relationship with God. But how can that relationship be meaningful and authentic if we haven’t created a space for people to be? It’s the holiest among us who are the most vulnerable because it is their light that is brightest. … Are we going to fight and protect that light?

“For me the Hanukkah candles represent the strength and sacrifice of all those brave souls who came before and sacrificed by putting it all out there to make it easier for us to do the same.”

Shortly after delivering his Hanukkah speech, Moskowitz was out of a job at his synagogue and at Columbia’s Hillel. He began pursuing social justice work and found himself in a police wagon in Washington, D.C., across from Rabbi Sharon Kleinbaum. Both of them had been arrested at a DACA demonstration. They knew immediately that Moskowitz had a role to fill at CBST. Kleinbaum created a position for Moskowitz, which he described as “a blessing.”

On a typical day at CBST, Moskowitz meets with trans people from all over the world in person and virtually. He counsels families, rabbis and faith leaders. A lot of his work is helping Orthodox educators and parents whose students and children have come out. “Every person’s story is unique, but there is a common thread,” he said. “One’s religious identity is just as real, if not more, as sexual and gender identity. But a religious identity is a choice. Sexual identity and gender identity are not.”

It’s not surprising that Moskowitz gets his fair share of hate mail. What’s inspiring is that he responds to it. He said: “If people have taken the time to express their hatred, I can use it as an opportunity to have a conversation. Most people don’t respond, but sometimes they do.”

Perhaps Moskowitz’s biggest lesson is that nobody’s life is hypothetical. “The Torah is eternal,” he said. “It is our job to uncover the Divine will to make space for every single person to be in a relationship with God. That is the work.”