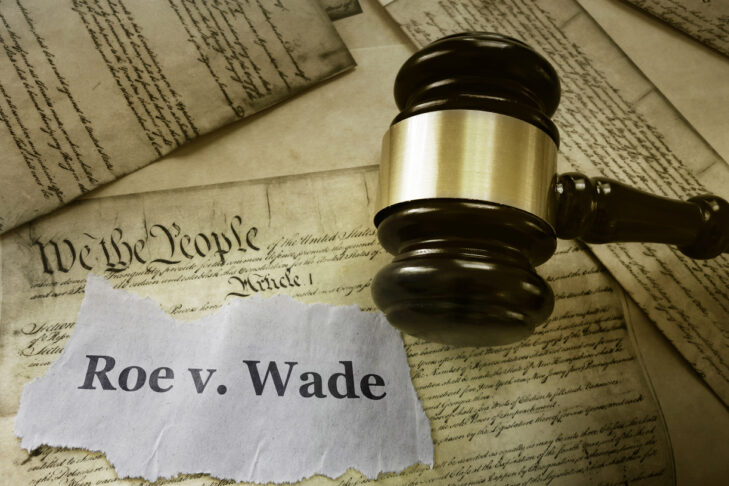 Here is a story I’ve heard all my life: Before my grandmother delivered my mother prematurely almost 87 years ago, the doctor came to my grandfather and told him he might have to choose between the life of his wife or that of his unborn child. My grandfather, the son of a rabbi, immediately decided to save his wife—the mother. My grandmother delivered my mother with complications, but both mother and child survived.

Here is another family story: My paternal grandmother tried to self-abort. There were whispers that her brother, a doctor, medically intervened on her behalf. My grandmother was thrown in cold showers and told to “get a hold of yourself” as she crouched in a dark pit of anxiety and depression. She endured a crude version of electroconvulsive therapy, losing her memory but regaining some of her life back. In the end, none of this was her choice.

Twenty-seven years ago, I obtained the safe, legal abortion denied to my grandmother. I had a 6-month-old daughter and was struggling emotionally as a new mother. I knew I could not handle two babies less than 15 months apart. More importantly, I worried for my daughter that I could not be the mother I wanted and needed to be to her. My decision was heart-wrenching, but I remember from that hazy time that my Judaism unequivocally supported my choice not to have a child. My health, which included mental health, was a priority, as was my life in all its facets and complexities.

This past week, The Boston Globe reported: “The 2019 Reproductive Privacy Act protects the right to an abortion in Rhode Island, but high costs, a limited number of clinics, and other issues make accessing services difficult or impossible for many women.” Despite Martin Luther King Jr.’s iconic quote, the arc of the moral universe is not currently bending toward justice.

Considering last week’s shocking but not unexpected news that the Supreme Court will almost certainly overturn Roe v. Wade, which has been the law of the land for almost a half-century, I researched what the various branches of Judaism and communal organizations have to say about abortion and reproductive freedom.

Let me contextualize these views, which are not as far apart as you might think: A 2015 Pew Research Center survey found that 83% of American Jews strongly support legalized abortion. Jews were first among other religious groups in the survey to say that “abortion should be legal in all/most cases.” That is not to say there are no gradations and outright differences among the branches of Judaism. But everyone seems to consider that the mother’s life is the highest priority. This is buoyed by the fact that, unlike abortion opponents and right-to-life Christian sects, rabbinic sources do not consider life beginning at conception or believe a fetus has the same protections as human beings. Again, interpretations vary.

In some of the internet rabbit holes I fell into, I learned there is a biblical precedent in Exodus that informs Jewish law about abortion. Exodus 21: 22-23 relates the case of two men who are fighting and causing a woman to miscarry. The verse says that if no other harm is done to the woman, the person who caused the miscarriage is liable for damages. But if there is further harm, he should be put to death. “Further harm” is not specified. This brings us to the rabbinic idea that the loss of a fetus is property damage, rather than murder. Like many rabbinic opinions, it has a cut-and-dried tone.

Over the decades, non-Orthodox denominations have consistently supported keeping abortion legal and accessible. The Union for Reform Judaism’s public advocacy started as early as 1958, when the rabbinate asserted that abortion is allowed in cases where the mother’s mental well-being is an issue—they noted there is a “strong preponderance of medical opinion that the child will be born imperfect physically and even mentally.” In 1985, the movement formally extended that opinion to cases of rape or incest.

The Rabbinical Assembly, the halachic or legal seat of the Conservative movement, similarly understands that the threat to a mother’s life includes psychological conditions. In 1983, the assembly declared that abortion was permissible “if a continuation of pregnancy might cause the mother severe physical or psychological harm, or the fetus is judged by competent medical opinion as severely defective.”

Orthodox opinion about abortion is highly nuanced and in many instances is judged case by case. Some Orthodox rabbinic sources permit abortion when “a mother’s health is in danger even if her life is not at risk; when a fetus is conclusively determined to suffer from severe abnormalities; when a mother’s mental health is in danger; or when the pregnancy is the result of a forbidden sexual union.” However, it’s crucial to understand that Orthodox rabbis do not unanimously endorse these exceptions. Many of them prefer to judge cases individually rather than pronouncing fixed laws.

There has also been Jewish communal support for abortion access. These groups include the National Council of Jewish Women, Jewish Women International, Hadassah and the Jewish Council for Public Affairs. In addition, the American Jewish Committee and the Anti-Defamation League have joined amicus briefs filed with the United States Supreme Court supporting access to abortion.

Jeremy Burton, executive director of the Jewish Community Relations Council of Greater Boston (JCRC), said in a recent interview with WGBH Radio that Jews do not necessarily “embrace the position of conservative Christians that life begins at conception. That belief is not a scientific data point. Within Jewish tradition, we have a different approach to understanding the beginning of life, and different approach to understand how one balances the value of the fetus and the value of the person who is pregnant.” He added, “I think it’s disconcerting, even almost disorienting, to be realizing that we’re in a moment where some of that long arc of history seems to be bending backward.”

Three years after my abortion, I had a beautiful son. The moment I held him, I knew he completed our family.

The National Council of Jewish Women is mobilizing The Jewish Rally for Abortion Justice in Washington, D.C., on May 17. Get more information about this powerful moment of collective action.