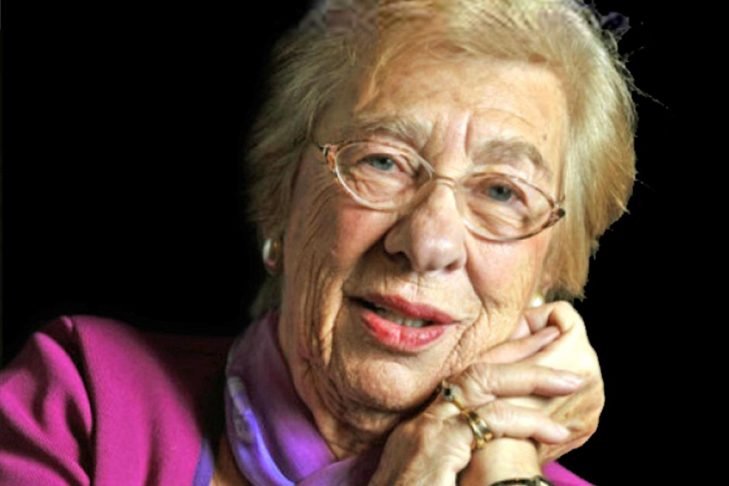 Over 700 people filled the auditorium at Brown Middle School in Newton on Nov. 1 for “An Evening with Anne Frank’s Stepsister Eva Schloss,” sponsored by the Chabad Center of Chestnut Hill. Schloss’s story includes her escape from her native Austria, two years in hiding in Amsterdam and nine months in the Auschwitz-Birkenau death camp.

During his introduction, Rabbi Mendy Uminer asked the audience, “Did anyone here lose someone in the Holocaust?” A few people raised hands. He then asked, “Are there any survivors here?” Several individuals responded and were welcomed by the rabbi. His final question was, “Who read ‘The Diary of Anne Frank’?” Almost everyone in the room raised their hands. “It’s hard to grasp the idea of millions of victims,” said Rabbi Uminer. “Anne Frank’s diary shows the power of an individual’s story. Eva’s book is a sequel to Anne’s story. It’s the other half of Anne’s story. They were the same age and lived in the same city. They were friends.”

Schloss was interview by Boston Globe columnist Jeff Jacoby, whose father is a Holocaust survivor. Jacoby noted that Schloss speaks all over the word to large audiences. “Your message resonates,” he told her. He asked Schloss if telling her story ever “gets old, since you tell it over and over and over.” “No,” she responded. “I am very passionate about it. I left Auschwitz at the age of 16 and I wanted to tell my story to the world. But many were lost after the war and didn’t want to hear it.” She continued: “I have to talk; we have to change attitudes. I once discussed this with Elie Wiesel, who said it was important to keep writing and telling the story to prevent it from happening again.”

Jacoby asked Schloss if, considering her experiences, she could be optimistic. “I have met many people who want to change the world,” she responded, “so yes, I am optimistic. I never give up hope. For the most part, the problem is not the people, it’s the governments.”

Schloss was born in Vienna, Austria, in 1929. “As a child I understood the importance of a good family life. I dreamed of having my own family. I had a wonderful life. I had young parents and grandparents.” In Austria at that time the state mandated that all children receive a religious education. She and other Jewish children were separated from the Christian students during those classes and given a Jewish education. “It made me want to be more observant,” she recalled. The disadvantage of these classes was that everyone knew who was a Jew. By 1938, after the Nazis annexed Austria, friends began to turn on her and her family. Her brother was badly beaten while his teacher just watched.

The family moved to Belgium, then to Amsterdam, where Schloss became friends with Anne Frank, who was just one month younger. “I was a tomboy and she was into clothes and hairstyles,” Schloss recalled. “I told her about my older brother and she said, ‘When can I meet him?’ and she was 11! Her nickname was ‘Mrs. Quack Quack’ because she couldn’t stop talking.” Schloss had experienced anti-Semitism, but Anne had not. Anne’s father, Otto, who had seen what was coming, had left Germany in 1933. Hitler marched into Amsterdam in May of 1940. As conditions deteriorated and more Jews were sent to concentration camps, Schloss’s family went into hiding.

“At first Hitler just wanted to get Jews out of the way, not to kill them,” said Schloss. “And then he realized that no one cared.” The first victims of mass murder were disabled children. The Nazis told parents to give up their children, Jews and non-Jews, and that the state would be able to take better care of them. In reality, they were used as experimental subjects for the use of gas for mass killing. They were murdered in sealed buses with gas piped in.

Schloss and her mother had to separate from her brother and father because the people who hid them could not accommodate more than two people. “I was a very active child,” Schloss remembered, “but I had to sit still all the time. I was miserable.” She was able to visit her father and brother on two occasions.

Eventually they were betrayed. “On my 15th birthday the Nazis stormed in and took us away.” Schloss was interrogated and beaten at Nazi headquarters, but refused to tell who had hidden them. Soon, her family was deported to Auschwitz. She had heard about Auschwitz and the other 300 concentration camps by listening to the BBC; she knew Jews were being exterminated. Their trip to Auschwitz in a cattle car was the last time her family was together. In despair, her father said, “I can’t keep you safe anymore.” Some people died in transport. “When we got there, we had to strip naked in front of Nazi officers, have our heads shaved and were tattooed like cattle.” Someone made a mistake on her tattoo, and there is actually a cross-out and a correction on her arm.

Schloss, along with her mother and other female prisoners, were marched naked in front of Josef Mengele, the notorious Nazi officer and doctor nicknamed “The Angel Of Death” for his unspeakable experiments and murders of prisoners. Her mother, Elfriede, Fritzi, was taken away with 40 others to be gassed. For months Schloss mourned her mother, whom she later found out had actually survived. Her brother and father did not.

In 1945 the Russians arrived at the camp. Schloss was liberated. “The Russians were good to us,” she said. Leaving the camp with Schloss and her mother was Otto Frank. They were repatriated to Amsterdam. When they returned to Holland, Eva and her mother were able to recover some of her brother’s beautiful paintings, which he had hidden. Otto Frank found Anne’s diary. As he read he was stunned by his daughter’s spellbinding prose. He said, “I didn’t know my own child.” Eventually Fritzi and Frank fell in love and married. His advice to Eva, his stepdaughter: “Don’t live your life hating people. You’ll be miserable.”

Schloss went on to study art at Amsterdam University and moved to London to train as a professional photographer. She later met her husband, Zvi, to whom she was married for 62 years. He died in 2016. They had three daughters and five grandchildren.

Schloss has shared her story with thousands of people in the U.S., England, Europe and Australia. She received an honorary doctorate from the University of Northumbria in England and served as a trustee of the Anne Frank Educational Trust in the UK. She has written three books: “Eva’s Story,” “The Promise” and “After Auschwitz.”