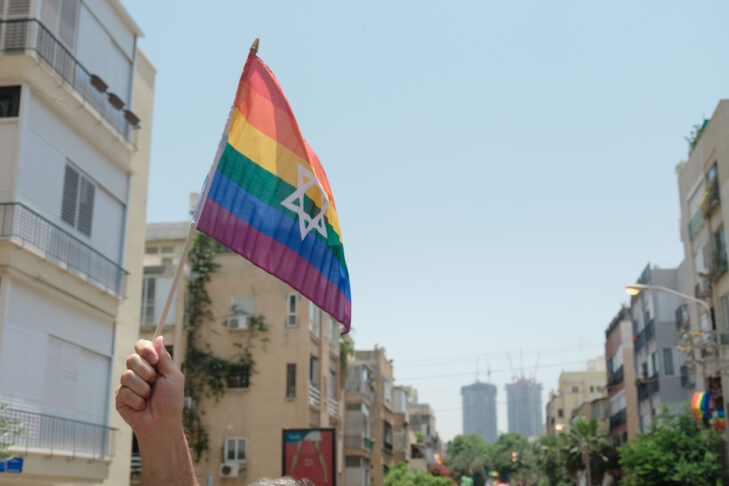 As the nation commemorates Pride Month this June, local LGBTQ Jewish community leaders reflected on how antisemitism affects queer Jews, including in ways that may be different from non-LGBTQ Jews.

“I would say that LGBTQ Jews, like all people who experience marginalization and oppression, have a different perspective on vulnerability, on injustice, than people who are not LGBTQ, by virtue of our experience,” said Idit Klein, the head of Keshet, a Boston-based advocacy organization for LGBTQ Jews. “Therefore, our experiences of antisemitism do affect us on a different level, in a way that resonates more deeply than non-LGBTQ people because of that additional experience of marginalization and oppression we experience as queer people.”

A 2013 Pew Research Center study found that 2% of LGBTQ adults in the U.S. identify as Jewish, mirroring the overall percentage of Jews in the national population.

Local LGBTQ Jewish community leaders said that in some ways, life for LGBTQ Jews has improved in recent decades, reflecting nationwide trends. Among the advances are the 2004 legalization of same-sex marriage in Massachusetts, which preceded the right to marry nationwide. Interviewees also cited increasing inclusion within Jewish communities, including the ordination and hiring of LGBTQ rabbis, and the founding and development of advocacy organizations such as Keshet.

One source of concern was the rise of violent events connected to antisemitism, including the “Unite the Right” riots in Charlottesville, Virginia, in 2017, and the mass shooting at the Tree of Life synagogue in Pittsburgh in 2018.

Marvin Kabakoff, who leads the Rainbow Committee at Temple Sinai in Brookline, said that former President Donald Trump “lifted up a rock and allowed all these things to crawl out—all the bigots and racists and antisemites to crawl out. They were unafraid of being open about how they feel.”

Today, Kabakoff said, “I don’t feel safe as a Jew or as a gay man. We can be attacked on two fronts.”

He noted a troubling convergence: “Folks who are more likely to be antisemitic are very often also likely to be homophobic.”

This concern was shared by Rabbi Toba Spitzer of Congregation Dorshei Tzedek in Newton, who in 2007 became the first openly LGBTQ person to lead an American rabbinical organization—the Reconstructionist Rabbinical Association.

Spitzer said that queer Jews “may be more vulnerable than non-LGBTQ Jews” to the “really violent, dangerous antisemitism manifested on the right wing by white nationalists. I feel like a lot of anti-trans, anti-gay rhetoric comes from the same people.”

In both cases, much of this hatred “comes from not understanding us, from fearing us, from dangerous misinformation about who we are, what we do,” said Oberstein, who added that being Jewish and a gay man in a same-sex marriage are both central to his identity.

Twenty-five years ago, there were also concerns over how LGBTQ Jews were viewed by the mainstream Jewish community, according to Keshet co-founder Jonathan Krasner, who established the organization with Jared Goldfarb to address such tensions.

Now a professor of Jewish education research at Brandeis University, Krasner said that while he’s pleased with progress within the Jewish community, “in many respects, America as a whole has become a far less tolerant society than it was a decade ago, and this affects LGBTQ Jews as it does other historically marginalized groups. Economic and cultural resentments have been exacerbated by deep political polarization, the fallout from the [COVID-19] pandemic, and the poisonous environment in many corners of social media.”

Although Krasner is worried about the far-right embrace of antisemitic conspiracy theories and their effect on LGBTQ Jews, he’s also concerned by developments on the left.

“LGBTQ Jews are also impacted by hatred on the far left, where legitimate criticism of Israeli policies against Palestinian Arabs sometimes bleeds into antisemitism,” Krasner said. “There have been high-profile incidents, like the ejection of LGBTQ Jews carrying rainbow Star of David flags from an LGBTQ Pride Parade in Chicago.”

“I don’t think antisemitism ever goes away,” Spitzer said. “It’s been around for 2,000 years. It’s much more explicit, certainly, on the right wing. I don’t believe anti-Zionism in general is antisemitism, although there are times when anti-Zionist language certainly crosses the line into antisemitism.”

“Overall,” she said, “I think American Jews are incredibly safe and integrated here in America. What I would say, as someone with multiple identities, Jewish and lesbian, is that we really need alliances. As Jews, we need alliances with communities of color, both because of Jews of color in our communities and as part of wider alliances.” She added, “We similarly need to be in alliance with the LGBTQ community,” and that “it’s in all of our interests to defend against various forms of hate.”

“The core message of antisemitism is that on some level, Jews should not exist—that they should be eradicated, like the Nazis [wanted], or they should convert and not be Jews anymore,” Spitzer said, comparing this to the backlash against the LGBTQ community, “whether you’re gay or trans or nonbinary, you should not exist as such.”