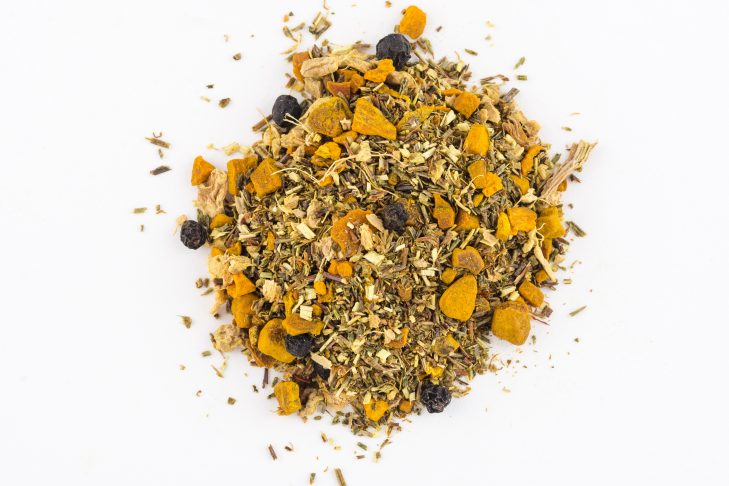 Liat Racin first discovered the therapeutic powers of mushroom tea while a college student at American University in Washington, D.C. A friend had contracted an immune-deficiency disease and began drinking raw, dried mushroom teas to boost his immune response.

She was intrigued. Various types of mushrooms, such as chaga and reishi, have long been believed to have medicinal properties for drinkers, ranging from more energy to a strengthened immune system. Research has also pointed to a role in fighting cancer. Plus, there’s no caffeine, so there’s no need to worry about crashing headaches if you miss your morning cup.

“I like that you can drink it at any time of day,” she says.

Racin was drawn to their benefits, but not to the taste.

“Mushrooms taste bitter or too earthy,” she says. So she began experimenting by mixing them with ingredients like turmeric and ginger, which aids in digestion, to improve their flavor profiles.

“The herbs also augment the beneficial properties of the mushrooms themselves,” she says.

Racin moved to Boston to attend Harvard University as a post-doctoral fellow at the graduate school of design, studying urban ecology. But after work, she found herself in a different kind of classroom: the kitchen.

“I was working with herbs as a hobby, sharing with friends. I was finding myself coming home at night, in the evening after work, making these blends and refining ideas, learning about business after hours into the wee hours of the night,” she says. 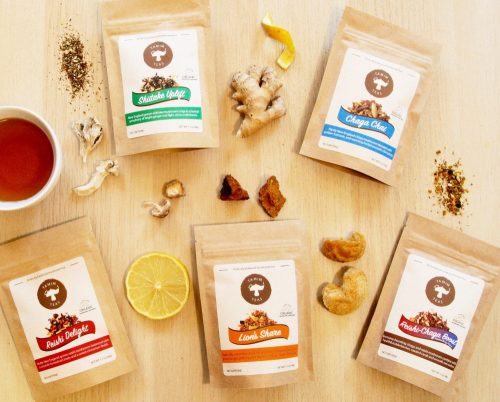 After much experimentation, Racin launched her own herbal tea business, Tamim Teas. She sells several blends, microbatched weekly, including Lion’s Share, associated with benefits for the nervous system and reducing inflammation; Chaga Chai, a boost for energy levels and a remedy for upset stomachs often used in Eastern European and Russian folk medicine; and Reishi Delight, a mushroom popular in ancient Chinese medicine with uses in cancer and blood pressure treatment.

Her company’s name has Jewish origins, she says.

“I’m Jewish. I was looking for a name [for the company] that conveyed that this was a simple product: dried, fresh mushroom and paired with herbs. There’s something very pure about that, and I thought a Hebrew name would be great. A lot of people ask what “Tamim” means, and I have a lot of pride in telling them that it means innocence and purity. It comes up a lot,” she says.

And there’s just something about a mushroom that transcends cultural boundaries.

“A lot of Jewish people, especially many who have lived in Russia or Eastern Europe, know the chaga mushroom,” she says. “A lot of these traditions around mushrooms are so tied to culture. Especially with the booming interest in medicinal mushrooms, a lot of companies are sourcing mushrooms in pill form and powder form and from unknown places to meet this demand. But there’s no reason to manipulate something that’s gone back so long! I work with family farms; it’s part of my ethics, knowing I’m not giving just anything to my community.”

Racin works out of a commercial kitchen in Arlington; stores such as Cambridge Naturals, Kickstand Cafe and Life Alive sell her blends. She also pops up at markets, including the annual Boston Jewish Food Conference, Herbstalk and the Boston Veg Food Fest.

Ready to put down your cold-brew yet? Learn more here.