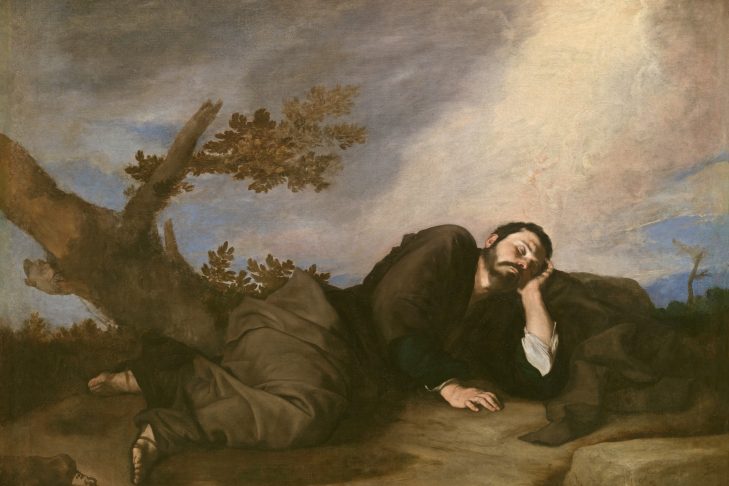 Vayetzei, meaning “He went out” in Hebrew, is the portion of the Torah where we learn about the life and travels of Jacob, father of Joseph of the “Amazing Technicolor Dreamcoat” fame.

This portion shares the life and travels of Jacob, whom I think of as the forefather who sought to marry his love, Rachel, and was tricked into marrying Leah. But before we get to the drama of his marriage to Leah instead of Rachel, the portion opens with a most striking and iconic visual of Jacob asleep, dreaming about angels going up and down a ladder between the heavens and the earth.

Jacob left Beer-Sheba, and set out for Haran. He came upon a certain place and stopped there for the night, for the sun had set. Taking one of the stones of that place, he put it under his head and lay down in that place. He had a dream; a stairway was set on the ground and its top reached to the sky, and angels of God were going up and down on it (Genesis 28: 10-12).

Since I learned this portion in fifth grade, I’ve had a visual in my head of this ladder to heaven—an image that gives physicality to this spiritual concept. The image physically and spiritually illustrates the connection between us, the humans, and the vastness of the heavens. It begs a question that I’ll bet many people ponder, but few admit—are angels terrestrial?

I think it’s physical and spiritual combination, the ability to “show” spirituality, that has made this Torah portion the subject of paintings for thousands of years.

Through this one portion and these seven paintings, we can see thousands of years of history and culture—divergent takes from across time and space on the same ancient text.

David Sharir is a modern Judaica and print maker, whose shapes, colors and gold leaf feel simultaneously ancient and contemporary as he illustrates stories of Jewish texts. In his piece “Jacob’s Dream,” Sharir shows four angels at the top of the ladder, with Jacob surrounded by four stones.

A most iconic work of modern Jewish art, Marc Chagall (born Moishe Shagal) painted this oil at Saint-Paul-de-Vence, France, the commune known for housing Picasso. Chagall portrays Jacob in a deep red, contrasted by bright yellow angels hovering above layers of angels in the royal purple and blue background.

Helen Frankenthaler was an Upper East Side born and bred Jewish-American abstract expressionist painter who died in 2011. While her piece “Jacob’s Ladder” may not bear a clear visual of the Torah portion, in this impressively scaled 9 foot by 6 foot layered paint canvas, I see a ladder reaching up to an angel—a visual you must imagine you are standing before to fully appreciate.

“Jacob’s Dream” (Spanish: El Sueño de Jacob) is a 1639 oil-on-canvas painting by the Spanish painter José de Ribeira (known as Lo Spagnoletto, “the little Spaniard,” by his contemporaries). The 6 foot by 8 foot piece hangs in the Museo del Prado in Madrid and feels slightly less dark than the dark and gloomy hallmarks of his tenebrist style. This less literal version of the story doesn’t show a ladder or an angel, but rather a sleeping Jacob with light intended to portray the divine.

Georgio Vasari was an Italian Renaissance painter artist most known for his saint portraits, so it’s only appropriate that this painting depicts a monumental Renaissance-style staircase, filled with cherub-like angels.

In the Renaissance, dreams were depicted in art strictly as a religious experience. Italian Renaissance great Raphael shows this divine vision is his painting “Jacob’s Dream.” In Raphael’s painting, we see Jacob sleeping with his head on a rock and God hovering above the angels, dark clouds parting on either side to reveal the golden light of heaven. Raphael’s composition of the painting with God and the angels taking center stage was intended to help people understand this dream as a very real vision.

French Renaissance painter Nicolas Depri portrayed angels climbing the ladder and sleeping Jacob with a far more pop contemporary feel than his peers from this Renaissance period. This piece, which features five white robed angels heading up the ladder toward “God” hangs at the Musée du Petit Palais in Avignon (Southern France).