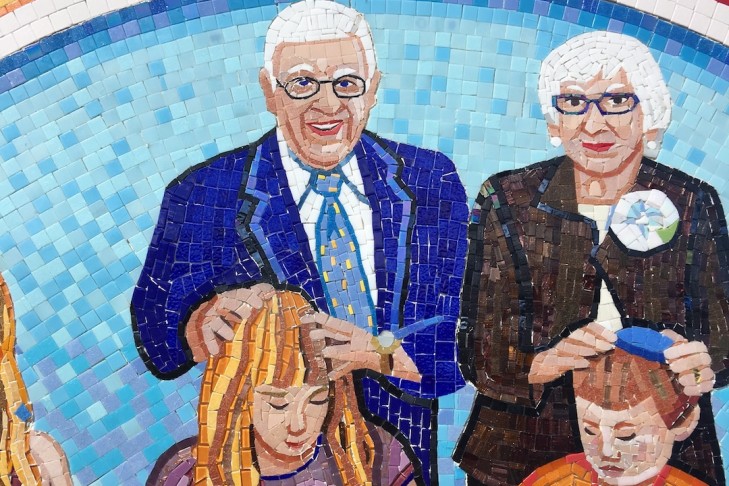 There is much intentionality and symbolism in Joshua Winer’s Jewish mosaics and murals. In this latest stage of his career, the Waltham-based artist’s interest in spirituality has taken root in the commissions he has accepted over the years from synagogues and Jewish day schools.

Winer, who has a degree in art with a concentration in painting from Yale and a master’s degree in architecture from Harvard, initially created large murals for Newbury Street in Boston and the S&S Deli in Cambridge. After five years as a practicing architect, he left the profession to stake out a living as an artist. His creative journey eventually brought him to mosaics, where one of his specialties has been to customize them for Jewish organizations.

Winer was raised in Wayland in a culturally Jewish home. While his family celebrated major holidays, he passed on having a bar mitzvah. In conversation with JewishBoston, he said: “When I was contacted by Jewish organizations to do these projects, it was a personal reawakening of my Jewish identity. I wanted to know about Jewish traditions and culture. I’ve been able to come back to Judaism by doing these projects, and that’s a gift.” 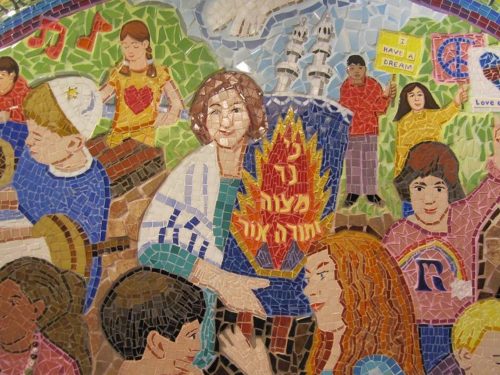 Most recently, Winer’s Jewish mosaics and murals have been prominently featured at The Rashi School in Dedham, the Epstein Hillel School in Marblehead, Temple Beth Elohim in Wellesley and Temple Beth Shalom in Needham. Each project, he observed, has been tailored to the needs and wishes of both children and adults in a given community.

With its location on the grounds of Newbridge on the Charles, The Rashi School’s mosaic project, “Shelter of Peace (Sukkat Shalom),” is pointedly multi-generational. Winer noted that the collaboration among students, teachers, parents and Newbridge residents enabled them to take firm ownership of the project. “That whole process,” he said, “allowed me to facilitate the community art as well as provide teaching and physical resources.”

The Rashi mosaic is also focused on the students’ connection to the American Jewish and Israeli communities. Winer noted that he incorporated shards of Israeli pottery in the mosaic to signify the American Jewish and Israeli relationship. On a more spiritual level, the depiction of objects raining down from celestial bodies signifies a broken universe reassembling itself. The overall message of the piece, Winer said, is to be welcoming and inclusive under the peaceful shelter of a tallit, or prayer shawl. 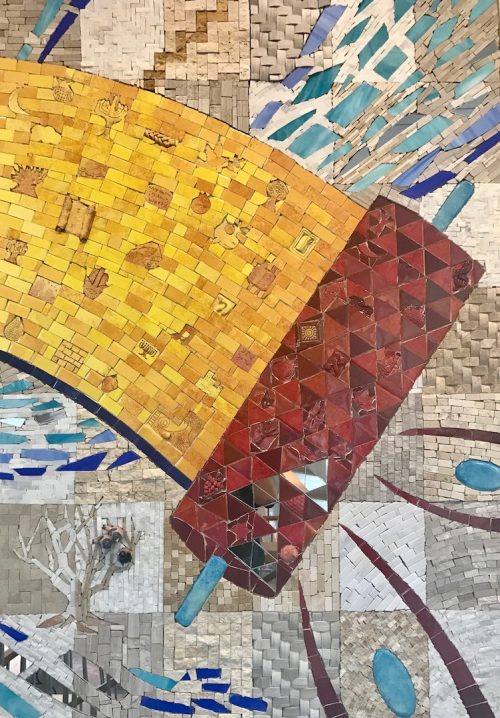 The theme of Epstein Hillel School’s mosaic is l’dor v’dor, from generation to generation. The mosaic was installed on the façade of the school’s building 20 feet in the air with a 12-foot diameter. For this particular piece, Winer and the school’s community commemorated each of the Jewish holidays. Color changes represent the different seasons with the center scene depicting children being blessed. The piece also honors the Kaplan family, who funded the mosaic. Winer said that within the context of a school, there is always a teaching agenda, as well as an aspect of community. For Epstein Hillel, the blessing ceremony fulfilled both ideals. Winer also included waves as a decorative element to call up the waves of the North Shore.

The mosaic in the atrium of Temple Beth Elohim is more interpretive. Composed of three panels, totaling 15 feet in length, the gridding is made of Jerusalem stone and shows the order of the universe. The blue pieces refer to Jews in the Diaspora and the piece illustrates a Torah unfurling at one end. At the other end, the scroll can also be seen as a shofar. Bringing these concepts together is Jacob’s biblical exclamation—which some interpret as his declaration of entering a relationship with God—“How awe-inspiring is this place!”

Winer’s project with Temple Beth Shalom in Needham was a mural. He worked with students in the temple’s religious school to create drawings depicting Genesis plot points. The children drew between 80 and 90 pictures on paper—pictures that included Joseph’s coat of many colors, Joseph calling for help from the well, and pictures of the corn and the cow in Joseph’s dreams. “That project was very child-intensive,” he said. “We did the painting over the course of two weeks, with many meetings that included the parents.” 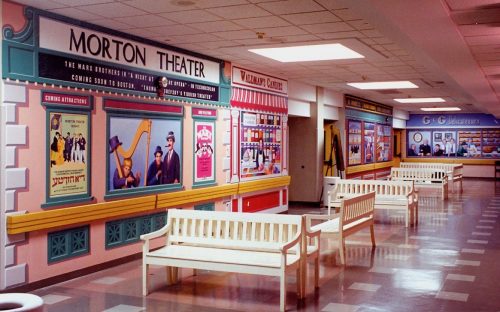 Next fall, Winer is scheduled to reinstall a 100-foot mural he originally created for the then-Hebrew Center for the Aged in Roslindale (shown above). The mural, painted in 1994, documents Boston’s Blue Hill Avenue of the 1920s and ’30s and will decorate the lobby of a Hebrew SeniorLife building in Brookline. When Winer originally designed the mural, he assiduously researched the storefronts and landmarks on the street. “Memories fade over time, and these pieces of art hold on to something,” he noted.

For Winer, working with his hands and making art with various communities fuels his creativity. “I’m not a solo artist in the studio,” he said. “I like working collaboratively. Communities have their own buildings, which often fits with my background and interests. The older I get, the more it helps me grow in my Jewish identity. I’m glad this part of my life is expanding.”

Learn more about Joshua Winer and see photos of his work here.