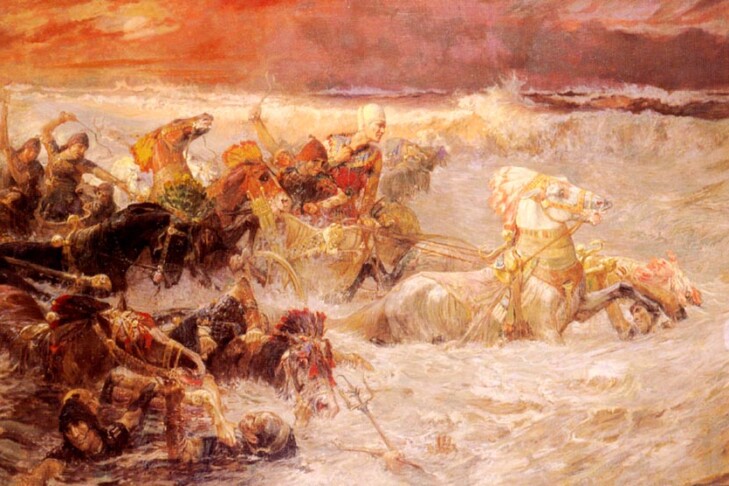 Sometimes there are moments in time that are so intense, so momentous, so anticipated that when it finally comes time to experience them regular prose fails, and the only way to truly capture them is through poetry. The parting of the sea in Beshalach is a moment like that—the emotion and excitement held in those first steps of freedom intermingled with the regret, despair,and fear at what they left behind was able to be captured only through the poetry and song of shirat hayam.

Jan. 20, 2021, in Washington, D.C., was also one such moment for many across the nation. A similar emotional scene was set: the violence of extremists nipping at our heels and a promise of a future of new freedoms ahead of us. This time it was youth poet laureate Amanda Gorman who stepped up to the task of trying to capture the feelings of both hope and trepidation present in the first moments of Biden’s presidency. She began: “When day comes, we ask ourselves, where can we find light in this never-ending shade? The loss we carry. A sea we must wade.” She immediately called to mind Beshalach and the people of Israel on the precipice of their new lives.

Beshalach begins as the Israelites are fleeing Egypt, with a strange commandment from God:

B’nei Yisrael to turn back and encamp at Pi-Hacheirut [loosely translated as the “entryway to freedom”] between Migdol and the sea, before Baal-zephon; you shall encamp facing it, by the sea.

God is commanding a moment of pause to look back at what the Israelites are leaving behind. As they stop, the Egyptians close in on them and the Israelites find themselves trapped between the encroaching Egyptian army and the seemingly impassable sea at the entryway to freedom.

In many ways the inauguration of Joe Biden felt like our own pi-hacheirut moment—we too are at the entryway to a new start. So how do we move forward from here, when we, like the Israelites, feel so divided? To answer, I think it is only appropriate to look at the poetic words of shirat hayam itself. The text says, “וַיָּבֹאוּ בְנֵי־יִשְׂרָאֵל בְּתוֹךְ הַיָּם בַּיַּבָּשָׁה”—“the Israelites entered amidst the sea on dry land.”

From the word  בְּתוֹךְ (amidst) the midrashic tradition extrapolates that there was a quarrel about who would be the first to walk into the sea, with each tribe insisting it would not be them. They quarreled for so long that Nachshon ben Aminadav walked into the sea on his own, and, according to the midrash, began to almost drown before the seas opened up and saved him. The text continues, telling us that the waters became a wall on either side of him, and Moses directed the rest of B’nei Yisrael forward. From here we learn that sometimes we can’t wait for consensus; sometimes we must step forward before the path is completely clear.

Similarly, upon exiting the sea and encamping at Marah, the Israelites seemingly forget the gratitude and exuberance of the miracle they witnessed just a few verses before, and begin to complain against Moses about their bitter thirst. Many commentators say that it was only a faction of the community that began to complain, indicating that even once they crossed the sea into freedom divisions still existed. The 19th-century commentator Malbim says of this incident that the correct course of action would have been for B’nei Yisrael to take up their complaints with God rather than with Moses, and that had they done that, God would have willingly given them water to drink. He writes that because they turned to Moses instead of God, it is a sign that their hearts are still not whole, that even within themselves they were divided.

This is often the way of the world—we are not unified, we do not come to consensus, we bicker even in the best of times. Certainly, we will see this pattern continue as Bnei Yisrael continues to wander in the desert. However, the lesson from both Beshlach and Gorman is that we must march forward even amidst hardship; we must continue hoping for the best parts of ourselves to succeed, even amidst opposition. Gorman writes, “We will not march back to what was, but move to what shall be: a country that is bruised but whole, benevolent but bold.”

B’nei Yisrael might indeed be bruised, but they will continue to walk forward hoping for benevolence and compassion to prevail. Beshalach is a parsha of extremes: the extreme hope and brightness of a future without slavery coupled with the extreme grief and trauma of the Egypt they’ve left behind; the extreme thirst and hunger of the Israelites in the desert coupled with the extreme abundance of manna from heaven. Sometimes there is a clear way forward through the extremes that has the power to unify, but often there isn’t that clear way forward. Thankfully, when all else fails, there is always poetry.

Yael Werber is a fourth-year rabbinical student at Hebrew College.