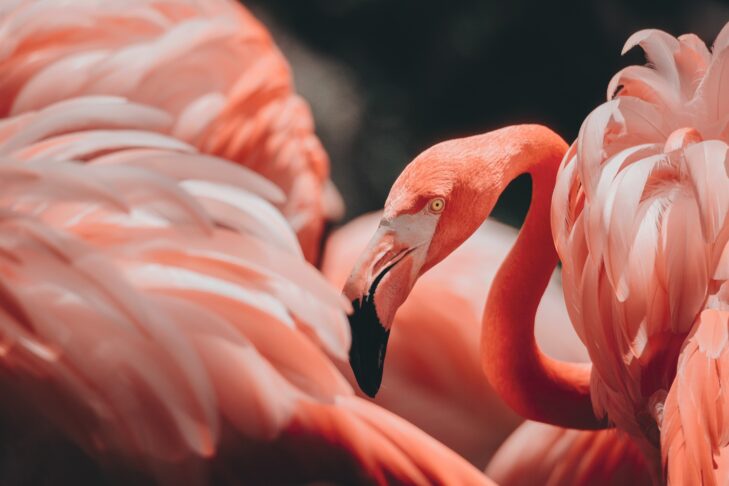 There are flamingos
in the Flamingo Habitat
at the Flamingo Las Vegas Hotel and Casino—
eight pink birds,
each balancing itself
on one twig-like leg.

And there are
a few full-length mirrors
fastened to trees
in the Flamingo Habitat,
which the flamingos
gaze into attentively.

I ask the caretaker,
who is aggressively
chasing away ducks
and feeding the fish and other birds,
why there are full-length mirrors
in the Flamingo Habitat.

She explains that flamingos
like to see other flamingos
around them,
and that as four of the eight flamingos
have been temporarily removed
for medical care,
mirrors were placed in the habitat
in their stead.

And my first thought
is that flamingos are like Jews,
sharing in common
this absolute need
to be surrounded by their own.
There have been entire months
when I’ve not made it
to synagogue or Sabbath meals
in Rhode Island,
but as soon as I’m off
to a new city or country,
I’m compelled to seek out Jews there.

An earlier version of this poem appeared in JewThink.

See here for more poems and stories by Shai Afsai.

Shai Afsai
In addition to fiction and poetry, Shai Afsai’s recent writing has focused on the works of Thomas Paine, Zionist historiography, “The bride is beautiful but she is married to another man” stories, Jews and Freemasonry, Benjamin Franklin’s influence on Jewish thought and practice, religious traditions of the Beta Yisrael Jewish community from Ethiopia, Jewish observance and identity in Nigeria, aliyah to Israel from Rhode Island, Jewish pilgrimage to Ukraine, Jewish-Polish relations, Jews and Irish literature, and Judaism in Northern Ireland.