One of the first things B.J. Novak says to me after we sit down is how my double recording our interview for safety is “very Jewish.” We laugh. “None of the others did this,” he tells me. And I’m his last interviewer of the day.

It’s surreal to be sitting across from the guy who, among many other roles and accomplishments, played Ryan Howard on “The Office,” but, at the end of the day, Novak is just like me: a Jewish writer with Boston-area roots. He went to Newton South High School and Schechter Boston and attended Camp Ramah in New England. He made a name for himself with “The Office,” later appearing in “Inglourious Basterds,” “The Mindy Project,” “Saving Mr. Banks” and others, and now “Vengeance,” with which he makes his directorial debut for the big screen.

A smart crime comedy with heart, culture clashes, hard truths and regret, “Vengeance” is one of those films where you’ll feel compelled to sit through the credits just to stay in it. (The closing score from Finneas makes it mandatory.) Novak, who also wrote the film, stars as Ben Manalowitz, a New York City journalist who travels to the middle-of-nowhere Texas for the funeral of a girl he used to hook up with and gets roped into trying to solve her murder. Ashton Kutcher, Boyd Holbrook and Issa Rae also star.

Jewish humor is only one of the things we discussed—here’s our conversation.

You wrote and directed some of the most notorious episodes and scenes of “The Office”—“Diversity Day,” “Pretzel Day,” “Threat Level Midnight,” “Ryan Started The Fire,” “Scott’s Tots,” etc. What was it like writing and directing for film for the first time?

It was the same in a lot of ways and different in a lot of ways. I think the spirit of what I was trying to make is the same as with all those episodes that you mentioned. That is my favorite tone, which is realistic, but as far as you can push the believability for a joke or a scenario.

My favorite thing about “The Office” was how grounded in reality it was and yet how wild reality can get without ever being silly or cartoonish. So that spirit of sort of dry comedy. I definitely took the exact same rhythms of “The Office” into this movie. The differences were simply that it’s a much more epic scale when you’re shooting a Texas western called “Vengeance”; you want it to look like Texas. You want it to feel big. And there’s music, and there’s explosions and, you know, a lot of things that you don’t have in a paper company in Scranton.

Your brother, Jesse, wrote a song for the film. What was it like working together?

That was a pleasure. We used to make music together when we were kids growing up. I’d write the lyrics and he’d write the music to really inappropriate Thanksgiving songs and stuff.

That’s funny! Like what? You don’t have to tell me.

“Stuff Your Turkey” was one. 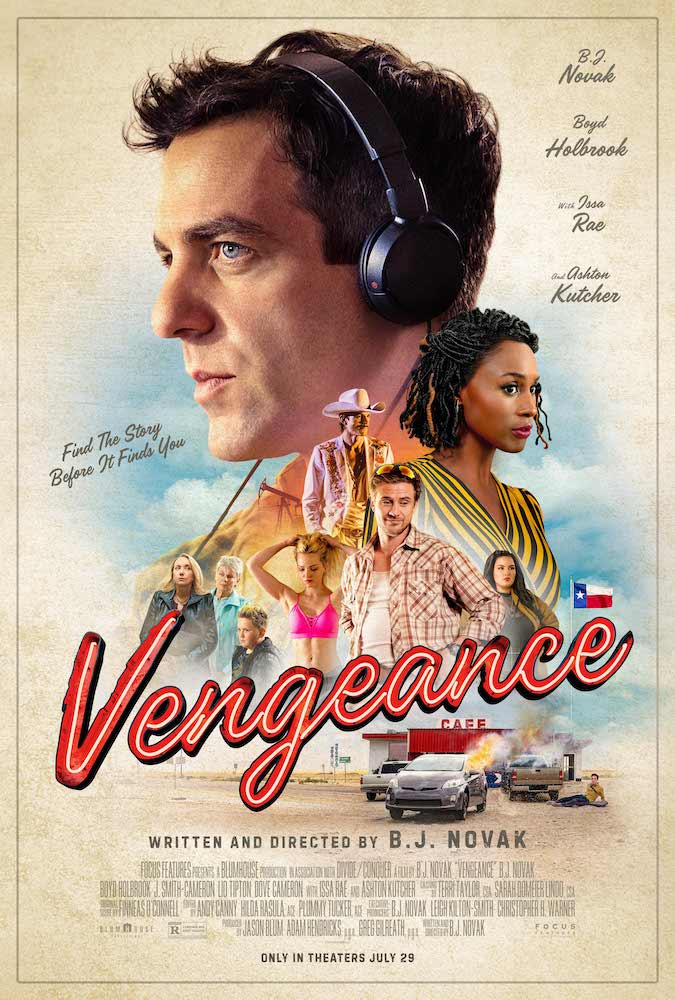 Your character in “Vengeance,” Ben Manalowitz, is a stranger in a strange land, which is a very Jewish theme. There’s a funny moment where Ty (Boyd Holbrook) says to you that you look like all the people in “Schindler’s List.”

“Well, you look like a guy from a Liam Neeson movie. Which one am I thinking of? ‘Schindler’s List.’ You look like a lot of guys in that movie.”

Yeah, I definitely wanted it to be acknowledged. First of all, his name is considered exotic there. It’s definitely a Jewish last name—it’s sort of made fun of at the rodeo. And then if you look carefully when he is reading threatening things about himself in the diner, there’s those three parentheses around “Ben Manalowitz” [on Twitter]. It goes by fast, but the references are subtle. I wanted to make it very much a presence in the character’s story without it being talked about.

How has your Jewish upbringing shaped your work?

I think looking at things with an outsider’s eye is very Jewish. I think, “How can I somehow outsmart this bad hand I’ve been dealt?” is the root of a lot of Jewish humor, and I think my favorite type of Jewish humor.

I remember when I was shooting “Inglourious Basterds,” I went and took a day to go to the Jewish cemetery in Prague. And the Jewish cemetery is the most crowded, sad, poor corner of earth that you could possibly…all these graves crowded together around a temple the size of a hotel bathroom. And the view from it looming over it is this magnificent Prague castle—it’s even called Prague Castle—and I thought to myself, “This is where Jewish humor comes from, that you believe that you have to tell yourself in shul that you are the chosen people in this terrible shtetl while you look up at this castle.” You have to know there’s something funny about that. And you have to believe that there is some irony to the world if you’re really gonna tell yourselves that you’re special when clearly your lives are so destitute. And I thought, this has got to be the beginning of Jewish humor ‘cause otherwise no one would put up with this. You have to have a sense of humor to get through it, and to admit to yourself that it does seem kind of funny that you’re proud to be Jewish in this terrible situation.

Your dad co-edited “The Big Book of Jewish Humor.” How was growing up around that? How did that influence you? Did you feel like you had to live up to that?

I think it was just that it became even more a part of my language. The Jewish humor was just around us all the time. So the mindset that I was just talking about was really the language we grew up with.

What’s it like being back in Boston to promote your film? Why was it important for you to make Boston a stop on your press tour?

Well, I’ve only been to the Coolidge Corner Theatre twice—and it was to be driven alone to the theater to see an art movie that no one wanted to see with me. So to come back to hopefully a packed house for my own movie, I think I’ll finally feel complete. That’s what I’m banking on, anyway. 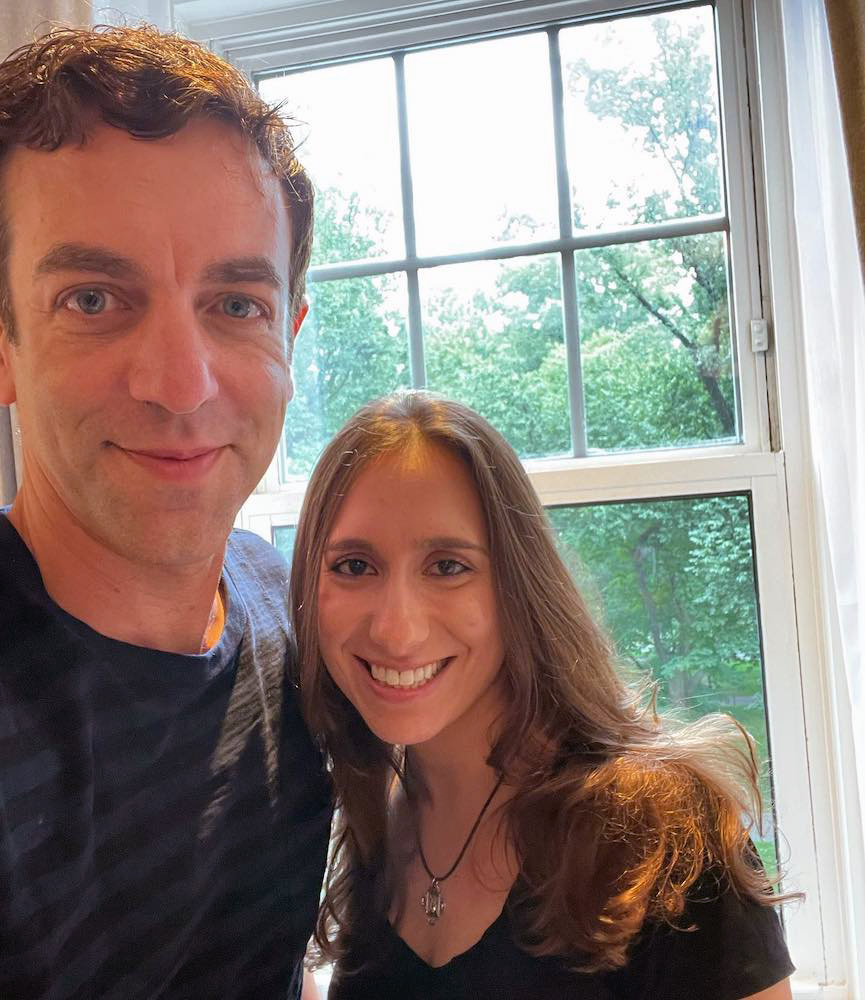 What do you want people to take away from “Vengeance”? What conversations do you want them to have?

What’s a special moment that stood out to you during the whole project?

All the rodeo research was fun. I went to a lot of rodeos and I always felt both happy and out of place and happy to be out of place. The panic attack I had when they green-lit the movie was a funny experience looking back. The premiere at Tribeca was very exciting. I guess beginning, middle and end were exciting moments.

What did the film teach you about yourself?

I think the film taught me that I’m better than I thought I was. I think I really wrote the movie at first out of a lot of self-judgment and shame. I was making fun of who I thought I was, which was pretty shallow, lived for the chance to hang out with John Mayer and hit on different girls and put together this life where he thought he was cooler than he was.

And I realized acting in it—because when you act, you need to find what you love about the character—and so acting it and also showing the script to people and realizing: “Oh, everybody’s like this these days. Everyone has names in their phone they can’t remember when they met them. Everyone feels misunderstood with someone they were only hooking up with or wanted more with, or wanted less with. And all of us think we’re cooler than we are.” I think realizing, “Oh, all the flaws about me are things that other people feel too about themselves.” That, I think, was very healing for me, and also a great reminder that the more personal you think you’re getting, the more universal you are.