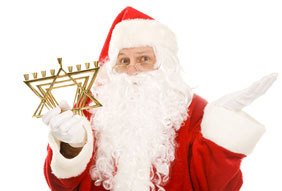 The revelry, the songbook, the lights, the presents, lying to children about where presents come from…it’s the most wonderful time of the year. Some people love it, and Jews living in multifaith families feel the compulsion to include both Chanukah and Christmas. But many American Jews feel assaulted by the tropes, tones and expectations of Christmas. So here are a few ideas – strategies, suggestions and evasion techniques – that you can implement when it’s beginning to look a lot like, well, you know.

Allow the indignation to run through you. Isn’t there separation of church and state in the US? Then why do I have to listen to Christmas at the mall? Why is the Target lady so annoying and why do we have to be so materialistic anyway? What’s up with the emotional manipulation on TV and in movies? I have a good mind to go political on Christmas, penning articles about the “December Dilemma,” bemoaning the lack of Hanukkah songs! Bah, humbug.

Reclaim the holiday in the name of Jews. The May family, founders of Macy’s, creators of the iconic parade and setting for “Miracle on 34th Street”: Jews. Irving Berlin: Jew. Jesus: Jew. Try a strong defense with “Don’t you just love ‘White Christmas’? Irving Berlin was Jewish, you know…” “You know, Jesus was Jewish, too, and you wouldn’t even have Christmas without him…” (On second thought, maybe stick to Macy’s and Irving Berlin.) This strategy is best used in major cities with low incidences of anti-Jewish sentiment and graffiti.

Adopt a convert. Jews-by-choice, especially those without Jewish families of their own, often feel alone on Christmas, a holiday which – even if of little religious significance to them – often comes along with a Samsonite size set of emotional baggage, sentimentality and regret over leaving behind one’s born family for one’s spiritual people. Bring a convert into your home, or invite them to dinner or a party, or fry them a latke or twelve – it’s a “bring-them-into-the-manger-mitzvah” that even Mother Mary would have endorsed.

Write a “home-for-Hanukkah” movie. With all due respect to “Four Christmases,” there’s no reason that family agita can’t happen around a stack of potato latkes rather than a Christmas ham. And think of the comedy potential of a Hanukkah dinner scene devolving into a soofganiyah (traditional Hanukkah donut, filled with viscous red jelly) massacre. But don’t just write a script – ask your friends to perform and critique the darned thing – discussion points can include some of the following questions: Is “The Hebrew Hammer” good for the Jews? Where do stereotypes come from? Could Barbra Streisand movies reverse the trend of assimilation? Tawk amongst yourselves. And don’t get upset if your screenplay is deemed “too New York” (Hollywood code for “too Jewy”). You’ll have made your point.

Take inspiration from our celebrity role models. What better way to talk about Jewish identity and assimilation than to discuss Jewish celebrities – those who have and who haven’t changed their names to make it in showbiz? The Adam Sandler Hanukkah song itself, despite being a comedy piece, is actually less laughable than the rest of the Hanukkah music. So why not pay homage by memorizing different versions of the song, and then make up your own? You’ll be transported back to a magical time when the screenplay from “Jack and Jill” didn’t exist.

Celebrate Hanukkah’s few pop culture moments. Kyle Krovslofsky on South Park singing “Lonely Jew on Christmas,” the episode of Friends when Ross insists on passing along his Jewish culture to his kids by dressing up as the Hanukkah Armadillo, and Jon Stewart showing up at Stephen Colbert’s Christmas special and asking “Can I Interest You in Hanukkah?”

Man vs. Food. We’ve got latkes, oil-fried Frisbees that come with a debate over sour cream or apple sauce. They’ve got Christmas ducks, hams, turkeys, fruitcakes, and God knows what else. Turn that healthy spirit of competition into a “Supersize Me” style eat-off: 8 days of Hanukkah vs. 12 days of Christmas. He with the highest cholesterol wins. And yet loses. (And before you argue about my use of “Man” and “he,” let me just say that this is definitely a gender bias. Most women will opt out of such a compeatition.) Also feel free to expand this into an epic dessert battle between Christmas fruitcakes and Rosh Hashanah honey cakes.

Shopping. The mall is the worst. But also, with bargains galore, the best. So while the easiest thing to do would be to stay home and do your toy shopping online (we heart you, Amazon!), most of us will still end up at the mall. So be flexible – all those single-minded Christmas shoppers bent on getting SodaStreams with their 10% off “EVERYTHING THE STORE!!” have one goal on their minds – but by being flexible, you’re able to bob and weave through this retail therapy dance, be improvisational – if scarves fall under attack, head to lingerie; if brassieres turn to catapults, head to shoes. Don’t team-shop – it doubles the traffic. Get in, get out and – as a solo act – don’t worry about leaving anyone behind.

Make up Jewy lyrics to Christmas songs. I’ll give you one to get you started…”Silverberg…Silverberg/oh how he works on my molars…”

Thank God (or count your blessings, if you’re not big into the God thing) for the things you don’t have to do. Standing on line for Santa Claus at the mall. Standing on a ladder – or worse yet, a roof – in order to outdo your neighbors at decorating your houses with lights. Caroling. Pretending to like Christmas wreaths.  Traveling the weekend of December 25 (of course Jews do this sometimes – we just don’t have to, religiously speaking). Trying to explain to your precocious child how Santa can possibly deliver all those presents in one day. Bringing a tree into your home and picking pine needles out of the carpet for months afterwards. You’re exempt. Free, even. So enjoy.

Accept that resistance is futile. People friggin’ love Christmas. And it’s not going anywhere soon – Christmas has permeated American culture for years – so maybe it’s time to embrace the best parts of Christmas: stories of family reunion and reconciliation, the best Christmas movies (looking at you, “A Christmas Story” and “Elf”), and the best movies shown at Christmas that aren’t really about Christmas (“It’s a Wonderful Life”). And of course, the Folger’s commercial that’s been running for thirty years and makes me cry every single time. I’m a sucker for a family reunion, what can I say?

What are your Christmas survival strategies? Share with the group – it will make you feel less like a lonely Jew on Christmas.

This article is part of JewishBoston.com’s Brief Guide To Christmas For The Perplexed! Download the entire guide or find the other articles in our blog section.