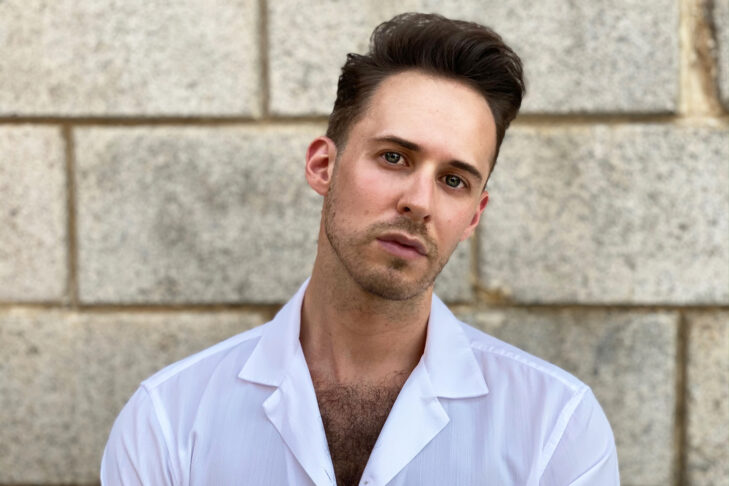 The first thing Ben M. Freeman shares with me is that he is a proud gay man. That was not always the case for the 35-year-old Glasgow, Scotland, native. “I encountered a good deal of homophobia growing up and absorbed the negative energy from the world around me,” he recently told JewishBoston. Over the years, Freeman’s activism has become a unique melding of advocating for gay rights and speaking out against antisemitism. “I joined Twitter specifically to participate in the fight against Jeremy Corbyn,” he said. Corbyn, once a high-profile leader of the British Labour Party and the UK’s opposition leader from 2015-2020, has been criticized for his association with antisemitic individuals and his anti-Israel stance.

Freeman is currently based in Hong Kong, where he teaches the history of the Holocaust in an English-speaking high school. In his book, “Jewish Pride: Rebuilding a People,” Freeman asserts that Jews alone should be in charge of their destiny. He says Israel is the Jewish people’s de facto homeland, and the diversity of the Jewish people is a cause for celebration.

The excerpts below are from a wide-ranging conversation with Freeman about LGBTQ+ pride, the diversity of the Jewish people, paying homage to the past and more.

On building an LGBTQ+ Pride movement for Jews and gays

“By the summer of 2019, I had been speaking about pride for a while and made a video talking about my perspective of Jewish pride. In the video, I asked, ‘What are you proud of?’ And it went viral in the British Jewish community. As a gay Jew, I realized that I was especially well-placed to build this movement because I already understood how to combat internalized prejudice.

“The first thing I wanted to do was pay tribute to those who were before me. We are standing on the shoulders of giants. We are connected to Jews who have come before us for thousands of years. Their work and their fight are the reasons we’re still here. I wanted to show some humility and not assume that I, in 2022, was the first person ever to be proud of being Jewish.”

On allowing others to define Jews

“I want to help people understand who we Jews were and who we are. In the west, so much of our identity is defined by the non-Jewish world. We are told explicitly that we’re a religious group, even though that is not a complete definition of our identity and people. ‘People,’ with a capital ‘P,’ as I describe it, is a great way to encapsulate the different facets of Jewishness. I wanted to explicitly state the idea that Jews are not just a religion. That’s where rebuilding a people comes in.”

On intentionally using the word “pride” in his book’s title 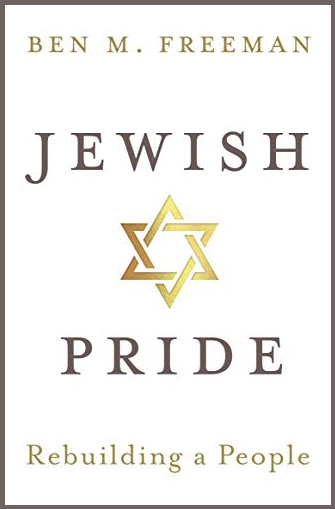 “I chose that word because that was my experience. I went from shame to pride. I think it’s an important word and it’s a word that I felt specifically able to utilize. For example, if a heterosexual Jewish person wrote a book about Jewish pride, some people might have a problem with that. Maybe they wouldn’t be justified in having a problem with it, but they could see it as appropriative. But I was not appropriating anything. I talked about one very specific experience and applied it to another very specific experience. I want people to connect these experiences with the fact that LGBTQ+ people have their pride movement, and it has inspired others.

“The modern Jewish pride movement was founded by a gay man and was specifically inspired by the LGBTQ+ pride movement. That gives me a lot of joy as a gay Jew. We have our own issues regarding LGBTQ+ people and how gay people are treated in our community. And I think it’s amazing that I get to stand up and talk to our people and write these books and not shrink my gayness. My gay identity is front and center in my work. In the second book of my planned trilogy, I introduced a friend’s experience with internalized homophobia. People will often say to me, ‘Are you gayer, or are you more Jewish?’ It doesn’t work like that; I’m a gay Jew. Both identities exist within me, and they inform one another.”

On anti-Zionism in the LGBTQ+ community

“It’s very painful and hurtful, but the most important thing is that I am not afraid of calling anyone out on antisemitism and anti-Zionism. So, if there are LGBTQ+ organizations or LGBTQ+ people rejecting Jews or making spaces unsafe for Jews, then I will say that. And similarly, if there were people or circumstances in the Jewish world rejecting LGBTQ+ people, I would also call that out. The fact that anti-Zionism has become a way to define one’s progressive identity is immensely frustrating. Many Jews who have previously identified as progressive, or previously identified as being on the left, feel that space or that identity questioned.”

On paying homage to the past

“What came before is key to understanding the modern leftist Jew. You need context. I’m almost at the end of teaching my course on the Holocaust. I don’t think we got to the Nazis until the fifth week of the course. We were going over things such as where have we seen these ideas before in Europe or other parts of the world? Why were the German people primed to accept what the Nazis were saying? It wasn’t that the Nazis were skillful propagandists. Jew-hatred was already there. The Einsatzgruppen—the mobile execution squads that followed the German Army into Eastern Europe—shot 1.5 million Jews, assisted by the local population. We didn’t see that so much in the west. Why is that? Because the intimate personal murder of Jews in the form of pogroms took place in the Russian Empire well into the 19th and 20th centuries during the Russian civil war.”

On using “Harry Potter” as inspiration

“I love Harry Potter and write to the ‘Harry Potter’ soundtrack. When I listen to it, I always discover more tropes and libels embedded into society that have created us Jews as the ‘boggart.’ This means that we take the shape of whatever or whoever is looking at us as the person they most fear. And that’s why we have contradictory elements in the kind of hate we experience. For example, the right explicitly says we Jews are not white, and they talk about ‘great replacement theory.’ And then you have the left who say the literal opposite: ‘We’re capitalists, we’re communists, we’re rich, we’re poor, we’re educated.’

“This is the crazy thing about being Jewish—it’s not about us. This is about non-Jewish perceptions imposed on us. And that’s why when we absorb them, it’s so confusing. You hear these ideas repeatedly in rhetoric about Israel. People will distance themselves from their Jewishness because they look at what Jewishness represents or at least what they’re told it represents. But, absolutely, we’re the boggart. And Harry Potter has endless references that help us understand our experiences.”

On exploring the diversity of the Jewish people

“I interview seven Jews for the book, including a patrilineal Jew who is Chinese American and a transgender Jew. I also talk to Hen Mazzig, a Mizrahi Jew. His family is Tunisian and Iraqi. He has been instrumental in getting people to understand the Mizrahi experience in Israel. It’s important not to think of the Mizrahi experience as separate because, in the end, it’s our experience too.

“As another LGBTQ+ Jew, Hen has been a leader in this space for quite a long time. I wanted to make sure that I included various Jewish experiences because we are such diverse people. Even among Ashkenazi Jews, there are distinctions. The Estonian Jews are very different from the German Jews. Then you have Sephardic Jews from Spain and Portugal, and then there are those Jews who went to Amsterdam and then South America. You also have those who went to the Ottoman Empire and then to Israel. It’s such a rich tapestry of tradition and history.”