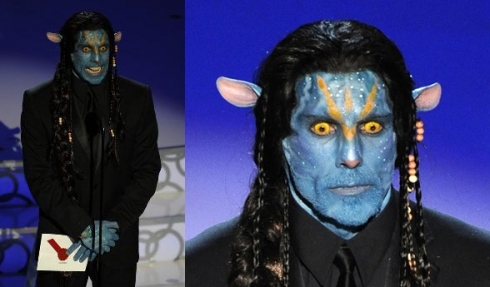 Ben Stiller, who played a rabbi in “Keeping the Faith,” is no stranger to Jewish humor.

At last night’s Academy Awards, he slipped in an inside joke that I wonder how many people noticed. Presenting the honors for Best Makeup, Stiller was flamboyantly dressed as a Na’vi alien from the blockbuster movie “Avatar.”

His presentation speech in the Na’vi language was actually a string of jibberish, tongue clicks and familiar phrases blurted out in a funny accent. Anyone unfamiliar with Hebrew would not recognize two of those phrases: “Pesach,” and “Boray Pah-Ree HaGaffen.”

The guttural letter Chet at the end of “Pesach” definitely sounds like it is from another planet.  Just not the Alpha Centauri moon of Pandora. (I had to look that up. I haven’t yet seen “Avatar,” but I want to).

What do you think?  Is sneaking in the last part of the prayer for wine into the Avatar speech a gesture of Jewish pride?  Or does it mock Judaism — or the Na’vi culture for that matter — by inferring that all foreign languages are just jibberish?

I don’t profess to intimately know Ben Stiller’s soul, but I think he meant well.

In fact, given that Avatar takes place in the year 2154, I see it as a positive development that Passover is getting some extraterrestrial airplay.  We Jewish educators are obsessed with Jewish continuity, after all.

And although Judaism does not encourage proselytizing, the religion is very welcoming to all who want to learn Torah.  No matter what planet you come from.

(Jewish educator Stacy Garnick seeks to exchange stories, ideas and tips with parents, teachers and everyone who loves Jewish history, culture, spirituality and arts at her “Learning, Laughter & Light” blog. She also is addicted to Israeli pomelos!)