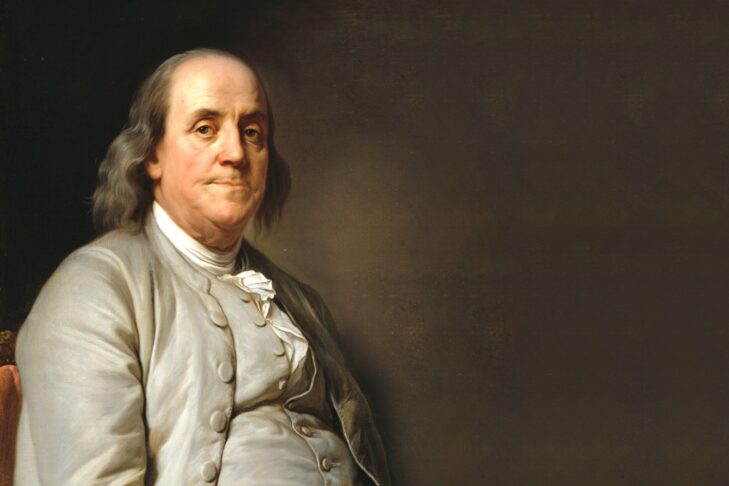 According to Ben Franklin’s correspondence with Benjamin Vaughan, the inspiration for two of his parables was taken “from an ancient Jewish tradition.”

Although Franklin did not mention the second parable (which he deemed less a “success”) by name, this has long been thought to be his Parable on Brotherly Love, also known as Chapter of the Ax.

A recent article on Franklin’s parables, Darcy R. Fryer’s “Benjamin Franklin’s Midrash” (Moment, March 21, 2021)—unfortunate for its conflation of fanfic with midrash (a traditional Jewish method of exegesis), and for treating any retelling or explanation of biblical events as “midrashic interpretation”—suggests  that Franklin’s Parable on Brotherly Love came “from the Talmud, via Maimonides, and probably filtered through Georg Gentius’ 1640 Latin translation of part of Maimonides’ Code.” This derivation has also been proposed at Founders Online, a National Archives website providing fully annotated documents from the Founding Fathers Papers projects.

Franklin (January 17, 1706 to April 17, 1790) composed his version of the Parable against Persecution no later than 1755, and brought it with him from the American colonies to England. Exceedingly fond of hoaxes, he memorized the parable and would “read” it aloud from the Book of Genesis, thus “proving” the scriptural obligation of religious tolerance to his less biblically erudite listeners.

Below is Franklin’s parable as offered at Founders Online:

However, not only is the Parable against Persecution not found in Genesis, it may not even be based on “an ancient Jewish tradition.” The parable as a whole has no known rabbinic source. Rather, scholars have concluded that the story reached Franklin by way of the writings of Jeremy Taylor (1657); Taylor, in turn, copied it from Georgius Gentius (1651); Gentius, for his part, attributed it to the “illustrious author Sadus,” the medieval Muslim Persian poet Saadi (1257); and Saadi began his version with: “I have heard that once…” The trail ends with Saadi.

Though Franklin’s Parable against Persecution does have biblical and rabbinic elements (George Alexander Kohut in a 1902 article and Rabbi Arthur Chiel in a 1976 article, have documented some of the parable’s Jewish aspects)—such as Abraham’s tremendous concern with hospitality in both biblical and rabbinic texts; Abraham’s insistence, in rabbinic writings, that his guests bless God after eating; Abraham’s violent opposition, in rabbinic writings, to idolatry; and the element of God’s instruction on forbearance to a prophet vexed by human infidelity, as is found in the Book of Jonah—no Jewish source has been discovered containing the key section of the parable in which Abraham learns the lesson of religious tolerance.

The late Franklin scholar Leo Lemay averred that Franklin knew that the source of his parable was the poet Saadi and that this was Franklin’s underlying ironic joke: his Christian audience “generally assumed it was a Christian document” with a good Christian moral, and was unaware that the parable derived from a semi-sacred Muslim text. However, it is not apparent that Franklin was himself conscious of the story’s Persian derivation, and Lemay offered no support for his position.

Although there is no identifiable Jewish source for the part of the parable dealing specifically with religious tolerance, there is no reason to suppose that Franklin—following Taylor, who had described it as “a Story which I find in the Jews Books”—did not sincerely believe the basis of the parable was “an ancient Jewish tradition.”

When it was found that writers well before Franklin had told much of his parable, he was accused of plagiarism. Defending himself in the postscript of a November 2, 1789 letter to Benjamin Vaughan, Franklin wrote: “The truth is, as I think you observe, that I never published that Chapter, and never claimed more credit from it, than what related to the style, and the addition of the concluding threatening and promise.” He contended that though he had not intended to publish the parable, “it is in itself, on account of the importance of its moral, well worth being made known to all mankind.”

Indeed, Franklin’s use of the parable exemplifies more than just his penchant for hoaxes. In both word and deed, Franklin was generally an advocate for religious tolerance and inclusiveness. He saw a positive societal role for faith and worship, and in his autobiography he professed an interest in projects “serviceable to People in all Religions.”

In 1788, when the members of Congregation Mikveh Israel—the oldest formal Jewish congregation in Philadelphia—were overburdened with debt incurred from constructing their synagogue, they turned to their neighbors, “worthy fellow Citizens of every religious Denomination,” for assistance. Franklin was among those who stepped forward to help.

In a move very much in line with his attitude toward religion in public life, Franklin assisted in alleviating the synagogue’s debt and ensuring a continued Jewish presence in Philadelphia by donating five pounds. His support was a morale booster for the small Jewish community. In The History of the Jews of Philadelphia from Colonial Times to the Age of Jackson (1957), Edwin Wolf and Maxwell Whiteman note that the amount of money contributed by Franklin and other non-Jews “was not—it is true—very large, but it heartened the Jews of Philadelphia.”

Fittingly, when Franklin passed away two years later, at age 84, his funeral procession in Philadelphia, as reported in newspapers, was led by “All the Clergy of the city, including the Ministers of the Hebrew congregation.”

A version of the Parable against Persecution entered Jewish literature in 1844, with the posthumous publication of a Hebrew adaptation done by the maskil (proponent of the Jewish Enlightenment) Rabbi Nachman Hacohen Krochmal. This adaptation was republished by Kohut, who pointed out its connection to Franklin, as part of his 1902 Jewish Quarterly Review article.

Krochmal—whose “Moral Parable” lacked any reference to Franklin when first published—went beyond translation. He altered Franklin’s final two verses, omitting mention of affliction in “a strange Land” (i.e., Egypt) as well as the triumphant exodus that would follow.

In a 1929 Hebrew essay, the critic, researcher, and editor Yosef Klausner reasoned that Krochmal modified the parable in this way because he “apparently did not want to mention the Egyptian exile so as not to also mention the exodus from Egypt ‘with Power’ (by means of ‘ten plagues’), and particularly—‘with much Substance’….”

Klausner ended his explanation elliptically, without any suggestion as to why Krochmal might have wanted to obscure the violent and plunderous manner in which the Israelites finally obtained their long-withheld freedom, as described by the Hebrew Bible and echoed in Franklin’s parable. Was Klausner implying that the way the Israelites’ Egyptian oppressors were dealt with runs counter to the parable’s moral message of religious tolerance, or that it appears not only vengeful but avaricious too?

Perhaps a simple explanation for Krochmal’s changes is that the two final verses Franklin added to the parable are unsupported by Jewish tradition and overtly contradict Jewish beliefs about why the Israelites were enslaved and about why they eventually departed Egypt with great wealth. Genesis 15:14 records God telling Abraham that his descendants’ persecutors will be held accountable: “And also that nation [i.e., the Egyptians], whom they [i.e., the Israelites] shall serve, will I judge: and afterward shall they come out with great substance.”

Krochmal’s Hebrew translation concludes with verses that accord better with Jewish tradition and belief—with God promising Abraham that, due to his devotion, the covenant with his descendants will be remembered and they will be brought back to the promised land: “But I will not breach my covenant with them, and will return them to their land; they will be my nation and I will be their God for eternity.”

At the end of a thorough 2010 article on the subject of Franklin’s Parable against Persecution (though it lacks Chiel and Klausner’s observations), Shimon S. of on the Maine-line notes that Krochmal’s posthumously published biblical-Hebrew adaptation was still deemed useful over 100 years later: “Interestingly, a Hebrew instructional book for students from 1952 included it, complete with its grammatical deconstruction.” However, it is still Franklin’s version, which he thought “well worth being made known to all mankind” that most Jewish readers are likely to encounter today.

This article first appeared in JewThink. Find more by Shai Afsai on the subject of Benjamin Franklin and Judaism here.