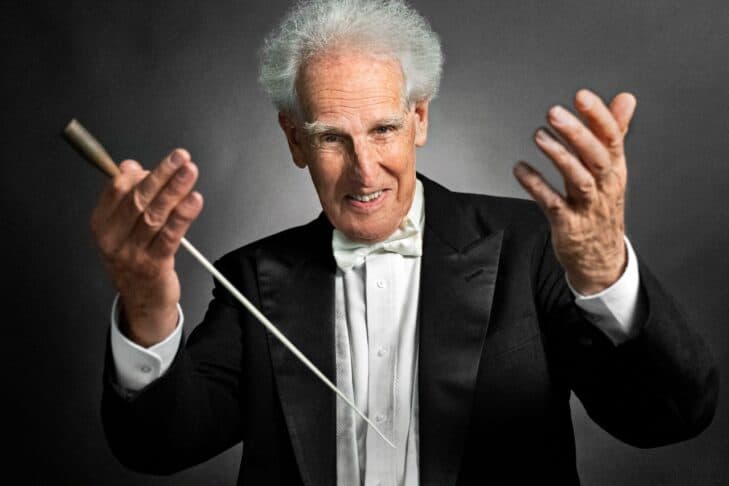 Conductor and cellist Benjamin Zander still has his grandmother’s grand piano—the piano in her home in Germany. Zander’s immediate family left Germany for England in 1937, and Zander was born there two years later, shortly before the Second World War. His grandmother and eight other family members were murdered in concentration camps.

“My grandmother’s death was a source of great grief for my father. It was an unclosed wound that he beautifully decided to close by giving me his mother’s grand piano. It’s very symbolic for me,” Zander recently told JewishBoston in a telephone interview.

The Zander family readily found their place in English society. Zander’s father, Walter, was prominent in London’s Jewish community. He had a leadership role with British Friends of the Hebrew University for many years. “He raised money, organized scholarships and ran the Jewish community around the university in London.” In addition, the younger Zander has conducted the Israeli Philharmonic Orchestra several times.

Zander’s life in music began when he was a child and studied the cello. By the age of nine, he was composing music. He credits his father with handing down and inspiring his son’s musicality. “My father was an extraordinary amateur musician. He was able to read a score the way that people read books. He could hear the music as if played on a record player. So when he was serving in the First World War on the Russian front, his mother sent him scores—even ones he had never heard—and he ‘read’ them in the trenches. That’s an amazing ability.”

Zander’s musical career blossomed, and in 1964 he came to Boston on a Harkness Fellowship. Zander describes the fellowship as “enormously imaginative,” allowing him to study at Harvard and Brandeis Universities. He recalls that he coached a string quartet at Brandeis based on his studies. “I would make some profound observation based on my week’s study and put it forward, and my mentor would say, ‘So what?’ That taught me that music must have fruition in the actual performance. Knowledge for its own sake is of little value. But if it affects how, you feel the music, play and present it, it has value.” 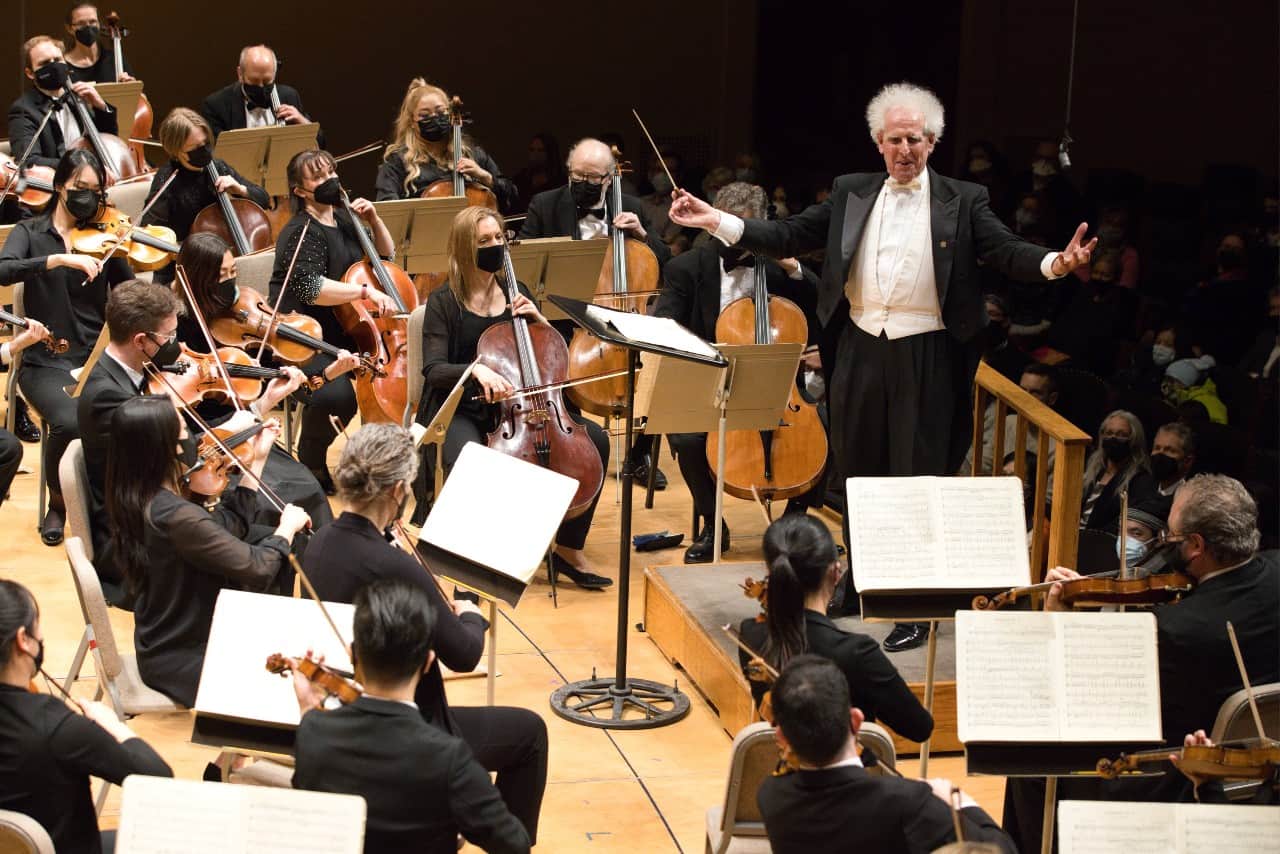 Zander spent more than four decades on the faculty of the New England Conservatory and directed its Youth Philharmonic Orchestra. In 1978, he founded the Boston Philharmonic Orchestra (BPO). In 2012, he started the Boston Youth Philharmonic Orchestra (BYPO) for musicians ages 12-21. Zander describes his connection to “two of the best orchestras in America” as an “extraordinary luxury.” Both orchestras demonstrate his unique and expansive vision of studying and performing music. Professional and amateur musicians, and students are members of the orchestra. This grouping of people is connected to the standards that Zander implements in his orchestra: excellence, training and love.

Aspiring to excellence is paramount in Zander’s orchestras. It allows him to recruit some of the best freelance musicians in Boston to play in the Philharmonic. The training involves educating and rehearsing students, many of whom are graduate students from the New England Conservatory and Boston University. “It’s wonderful to have these students,” says Zander. “Rehearsals are training sessions, which is very good for the professionals and the amateurs. Everyone is constantly learning new things.” Finally, love is the glue that holds Zander’s musical enterprise together and carries a sense of enthusiasm and caring. “These three elements are very much present in the adult and youth orchestras. They are workshops for possibility.”

Zander and his former wife, Rosamund Stone Zander, co-wrote a book fittingly called “The Art of Possibility.” He describes the book as “bringing forward the idea that there is always a pathway to possibility in the direst circumstances. Sometimes it seems remote, but there is always something you can say or do by the way you approach the world.” To that end, Zander’s famous TED Talk, “The transformative power of classical music,”expands on his belief, with obvious exceptions, that no one is born tone-deaf. “Everyone has a fantastic ear,” he declares. “If we even hear a kettle boiling, we are interpreting sound. That means that music can reach everybody.”

This notion and passion are shared with the audience before every BPO concert. Prior to each performance, Zander gives a lecture to “prepare listeners to understand the ideas and the structure of the music they are about to hear.” 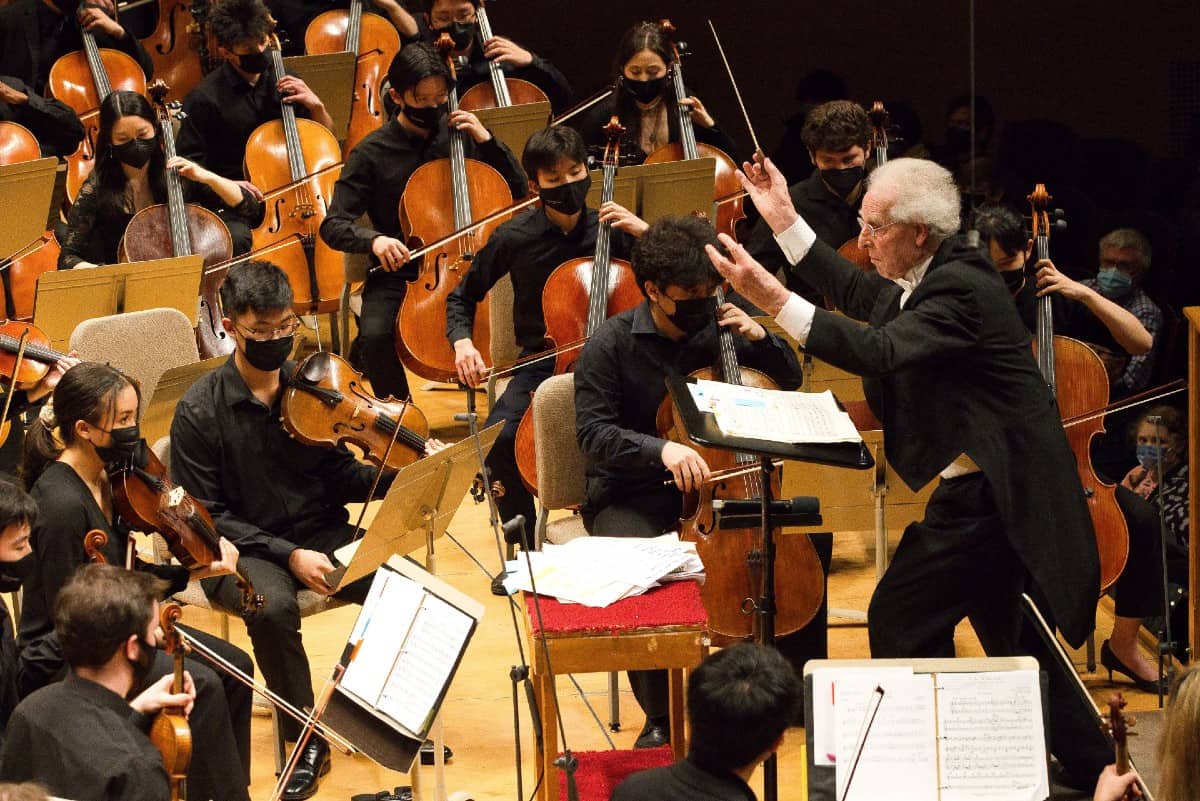 Zander is also known for placing white sheets on the music stands of both orchestras to solicit feedback, and whatever else the musicians want to share with him. These blank pieces of paper are like the letters a teacher might get from a student. For example, a teenager, who had been part of BPYO for two years, wrote on his sheet that he realized there “is much more to music than trying to outcompete others and make less mistakes.”

The idea of the white sheet feeds into Zander’s concept of making music without borders. He says the idea stemmed when he started BPO and had “the chance to start fresh and think through what we are and who we are. What do we want to do? This is not about people getting together to play a piece of music. It is like making soup and eliminating everything until you have the essence. The essence we came up with was creating passionate music-making and resisting the temptation to create boundaries, whether it’s the cost of tickets or relationships within the institution and its hierarchy. We break through barriers, and that vision guides us.”

To that end, Zander says that he and the orchestra “do as many things as we can to help people who don’t have access. For example, we reserve tickets for un-homed people. We know that to be involved with music, to listen to it and have it as part of one’s life, is an enhancement of being human. We feel that very deeply.” Zander says he sees the palpable appreciation of music in people’s eyes. He calls it “The Shining Eyes Test.” He explains that eyes don’t lie. And his idea of shining eyes is about reflecting joy and sharing.

Making music, performing it and sharing it is Zander’s legacy. That legacy is ever-present in his interactive website. “The website is all I have to leave. It is playground for people to play in the field of music and possibility endlessly.”