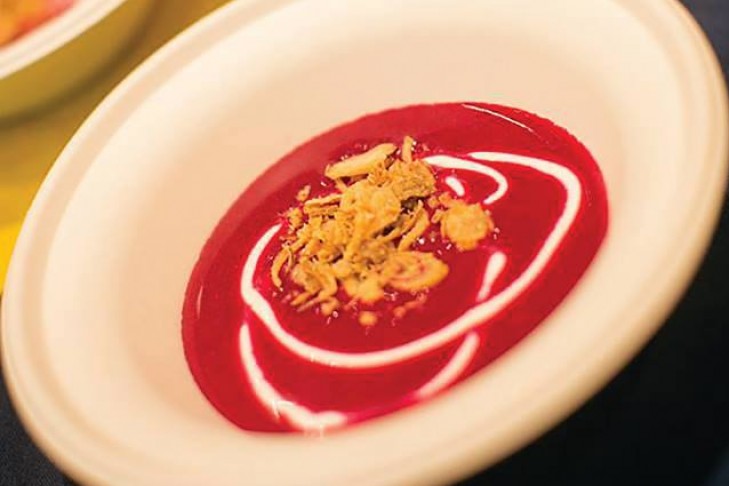 Here are my top nine moments from the first nine years to get you excited for the big 10th anniversary celebration on Sunday, March 3. Get ready to fill in your own 10th moment!

Mei Mei’s beet borscht: The velvety magenta beet borscht, created five years ago, was so beautiful that it became the default event image. Many people have said it made them believers in borscht. I think the ginger gave it a creative twist that definitely didn’t hurt!

Area Four’s tahini cookies: One of the most enticing desserts ever—a simple little shortbread cookie that people have not stopped talking about for six years.

“Iron Chef” judge Simon Majumdar’s appearance: He was in town visiting, we tweet-invited him, and the rest is history.

Avi Shemtov of The Chubby Chickpea’s shakshuka: Before anyone else in this town thought twice about shakshuka, he definitely had a hand in putting the delicious egg and tomato sauce dish on the map for many of us. It was even more memorable when Avi made family dinner shakshuka for all the chefs before the doors opened the following year.

Chef Josh Lewin brought his actual Bubbie Ruth (z”l): The sweetest, sassiest, most supportive real Bubbie you could imagine—and she was just awesome.

The time the event was supposed to be at the Moakley Courthouse: Because of a city-mandated power outage, the whole event had to be moved to a new venue two weeks before. Luckily, this is how we landed at our beloved current home, the Back Bay Events Center!

My son Zac’s first JArts event: At 1 week old! Four years later, he loves hummus, challah and knishes, so clearly it made the right impression early. I can’t wait to do the same with our newest arrival.

Now get excited for March 3 at the Back Bay Events Center—Israeli-themed for a fun twist in honor of 10 years, and as a finale to our first Taste of Israel restaurant week.