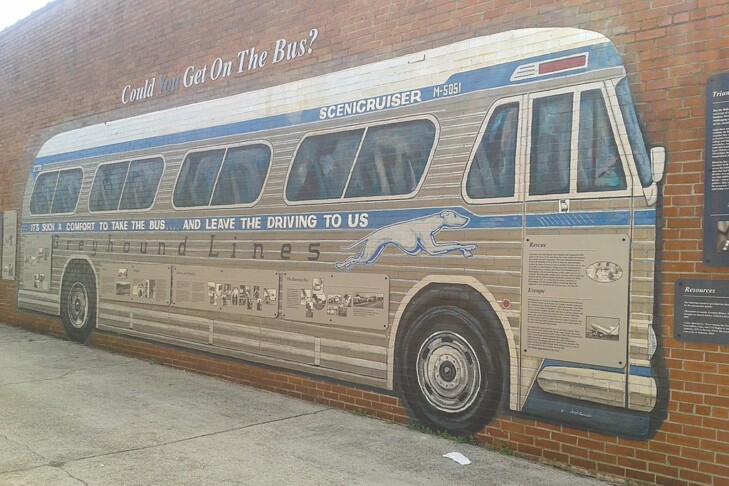 Participants in Rabbi Dr. Lisa Eiduson’s Congregation B’nai Torah weekly Lunch and Learn program have been focused, since the spring, on the topic “Civil Discourse in Turbulent Times: A Values-Based Approach.” Examining systemic racism in America through the lenses of literature, film, radio and print media, they have covered a wide range of topics, including the history of slavery in America, reconstruction, the roots of prejudice and gratuitous hate and the role of African American women.

Recently, the group hosted Emily Judem, senior digital producer for WGBH News, who shared her project, “The Long Journey North: The Forgotten Story of the Reverse Freedom Rides of 1962,” a collaborative endeavor between Judem and reporter Gabrielle Emanuel. The story, told through video (filmed and edited by Judem), audio and text, shares the story, long lost to history, of a scheme by Southern segregationists to trick African Americans into being shipped north, permanently, on Greyhound buses, with the false promise of opportunities.

“Fuming over the civil rights movement, southern segregationists had concocted a way to retaliate against northern liberals. In 1962, they tricked about 200 African Americans from the South into moving north. The idea was simple: When large numbers of African Americans showed up on northern doorsteps, northerners would not be able to accommodate them. They would not want them. The hypocrisy of northern liberals would be exposed,” shares “The Long Journey North.” “The Reverse Freedom Rides have largely disappeared from the country’s collective memory. The scheme almost never appears in history books and is little-known even in Hyannis, the primary target of the ploy. But today, with racial tensions re-inflamed, some hear echoes of that segregationist past in America’s present. And for the families that came north based on a lie, the journey has cast an enduring shadow on their lives.”

Judem shared how she, along with Emanuel, spent months getting to know Betty Williams, a victim of this heinous crime, before Williams felt comfortable sharing her very personal story of being bused to Hyannis, from Arkansas, along with her mother and siblings. “This was a multi-generational trauma and should be written back into our history,” Judem said. “It’s important to fill in history with the things we’ve forgotten so we can learn from our actions how we need to move forward in the future.”

The B’nai Torah Lunch and Learn group hopes that by promoting social justice and studying history through a Jewish lens they will be able to instill and enact foundational values and experiential lessons on which Judaism is based. Moreover, their deeper hope is to encourage and engage in conversations about civil discourse to foster a more just society.

“Our weekly Lunch and Learn sessions have become a positive and relational way of constructively using this pandemic time to learn about ourselves and others,” Rabbi Eiduson said. “Empathy is at the heart of the Jewish experience; it’s at the center of what it means to be human.”

Jew(ish)
Getting Bigger and Bolder: The New Jewish Climate Movement
By Hebrew College
Top Pick
Edit
Meat, Dairy and Everything In Between